Armed group’s leader in federal building: ‘We will be here as long as it takes’

Armed anti-government protesters have taken over a building in a federal wildlife refuge in Oregon, accusing officials of unfairly punishing ranchers who refused to sell their land.

One them is Ammon Bundy, the 40-year-old son of Nevada rancher Cliven Bundy, who is well-known for anti-government action.

He spoke by phone to CNN on Sunday at 8 a.m. ET. Asked several times what he and those with him want, he answered in vague terms, saying that they want the federal government to restore the "people's constitutional rights."

"People need to be aware that we've become a system where government is actually claiming and using and defending people's rights, and they are doing that against the people."

The group is occupying part of the Malheur National Wildlife Refuge near Burns after gathering outside for a demonstration supporting Dwight and Steven Hammond, father and son ranchers who were convicted of arson.

Prosecutors said the Hammonds set a fire that burned about 130 acres in 2001, to cover up poaching. The father and son were sentenced to five years in prison.

The Hammonds said they set the fire to reduce the growth of invasive plants and to protect their property from wildfires, CNN affiliate KTVZ reported.

CNN law enforcement analyst Art Roderick, a retired U.S. marshal who investigated anti-government militias for years, warned that Bundy's call for supporters to join him might "turn into a bad situation."

"What's going to happen hopefully (is) ... we don't go out there with a big force, because that's what they're looking for," he said. "The last thing we need is some type of confrontation."

He said that over the years, law enforcement has learned how to handle a situation like this; one that hasn't erupted in violence and in which a law may be broken, but there's no immediate threat to anyone's life.

The best approach now, Roderick said, is to wait the group out and to figure out how to bring a peaceful end to the standoff.

'We are not terrorists'

After the march Saturday, the armed protesters broke into the refuge's unoccupied building and refused to leave. Officials have said there are no government employees in the building.

"We will be here as long as it takes," Bundy said. "We have no intentions of using force upon anyone, (but) if force is used against us, we would defend ourselves."

Ammon Bundy said that the group in Oregon was armed, but that he would not describe it as a militia. He declined to say how many people were with him, telling CNN on Sunday that giving that information might jeopardize "operational security."

The elder Bundy drew national attention last year after staging a standoff with federal authorities over a Bureau of Land Management dispute.

"We are not terrorists," Ammon Bundy said. "We are concerned citizens and realize we have to act if we want to pass along anything to our children."

He wouldn't call his group a militia, but others are.

"I don't like the militia's methods," local resident Monica McCannon told KTVZ. "They had their rally. Now it's time for them to go home. People are afraid of them."

A U.S. Fish and Wildlife Service representative said the agency and the Bureau of Land Management are aware of the armed protesters.

"While the situation is ongoing, the main concern is employee safety, and we can confirm that no federal staff were in the building at the time of the initial incident," the representative said. "We will continue to monitor the situation." 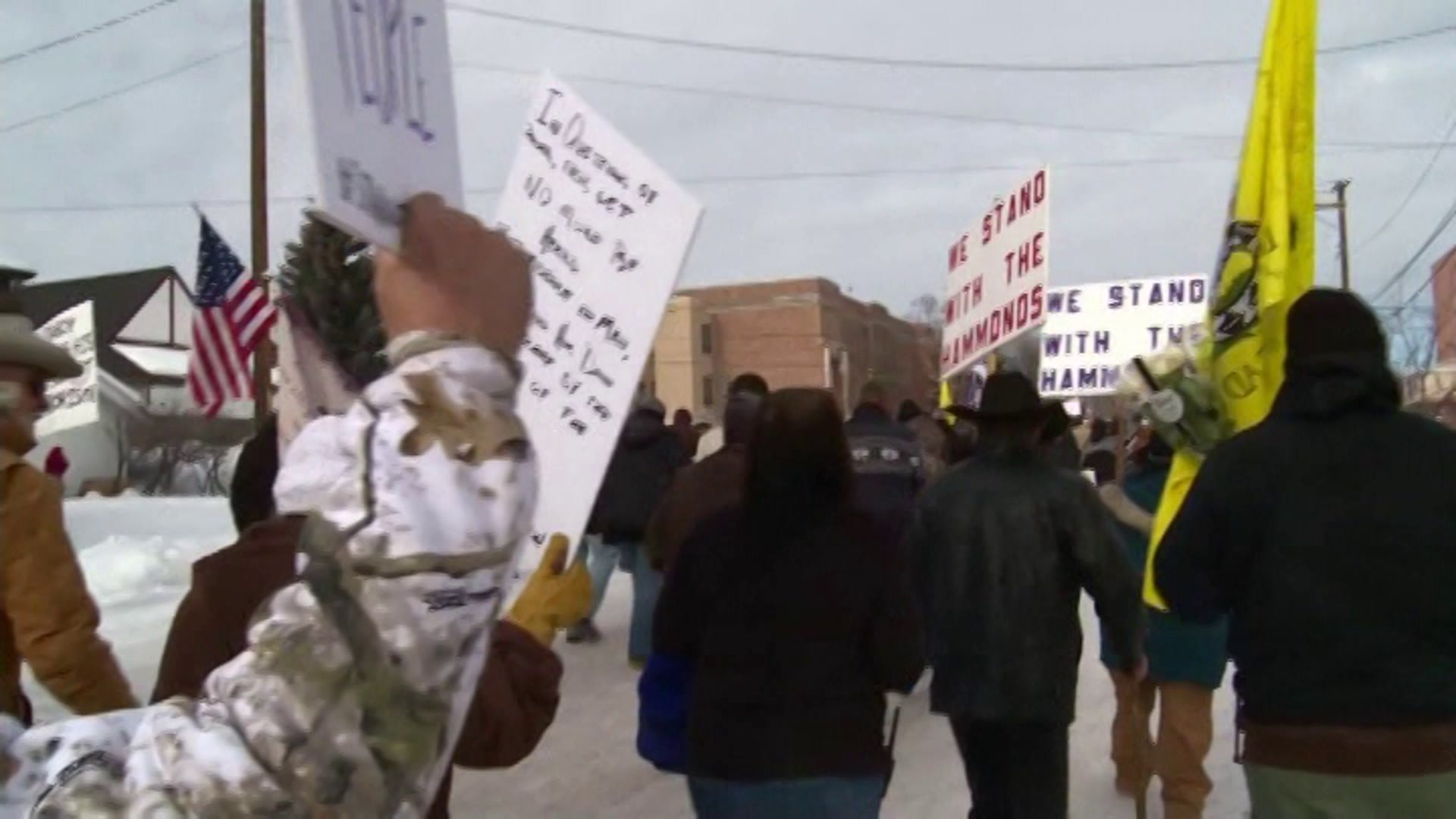 What the protesters want

When asked what it would take for the protesters to leave, Bundy did not offer specifics. He said he and those with him are prepared to stay put for days or weeks.

"We feel that we will occupy this as long as necessary," he said.

"We are using the wildlife refuge as a place for individuals across the United States to come and assist in helping the people of Harney County claim back their lands and resources," he said.

"The people will need to be able to use the land and resources without fear as free men and women. We know it will take some time."

He did not explicitly call on authorities to commute the prison sentences for the Hammonds, who are scheduled to report to prison Monday. But he said their case illustrates officials' "abuse" of power.

"Now that people such as the Hammonds are taking a stand and not selling their ranches, they are being prosecuted in their own courts as terrorists and putting them in prison for five years," Bundy said.

He said the Malheur National Wildlife Refuge has taken over the space of 100 ranches since the early 1900s.

"They are continuing to expand the refuge at the expense of the ranchers and miners," Bundy said.

He also said Harney County, in southeastern Oregon, went from one of the state's wealthiest counties to one of the poorest.

"I want to emphasis that the American people are wondering why they can't seem to get ahead or why everything is costing more and you are getting less, and that is because the federal government is taking and using the land and resources," Bundy said.

"And if it is continued, it will put the people in poverty."

What the feds say

His office declined to comment on the situation at the wildlife refuge Saturday, but it cited an opinion piece written by Williams in the Burns Times Herald last month defending the federal prosecutors' actions in the Hammonds case.

"Five years ago, a federal grand jury charged Dwight and Steven Hammond with committing arson on public lands and endangering firefighters," Williams wrote for the newspaper. "Steven Hammond was also found guilty of committing a second arson in 2006."

The prosecutor said witnesses saw the Hammonds illegally slaughter a herd of deer on public land.

"At least seven deer were shot with others limping or running from the scene," Williams wrote.

He said a teenage relative of the Hammonds testified that Steven Hammond gave him a box of matches and told him to start the blaze. "The fires destroyed evidence of the deer slaughter and took about 130 acres of public land out of public use for two years," the prosecutor wrote.

Williams also disputed the notion that the Hammonds were prosecuted as terrorists, as Bundy suggested.

"The jury was neither asked if the Hammonds were terrorists, nor were defendants ever charged with or accused of terrorism," Williams wrote. "Suggesting otherwise is simply flat-out wrong."