UNITED ARAB EMIRATES -- Firefighters battled a blaze that engulfed a luxury hotel in Dubai Thursday night while a spectacular New Year's fireworks display lit up the night sky nearby.

Orange tentacles of flames engulfed a large section of the high-end Address hotel soon after the blaze began around 9:30 p.m. (12:30 p.m. ET). Hours later, dark plumes of smoke billowed from the building as the fire still appeared to be searing several stories.

Witnesses said they heard explosions as the fire raged. A source told CNN the fire broke out in a residence on the building's 20th floor when curtains caught on fire.

Jaqueline Hurtado, a CNN en Español correspondent, said she was at a restaurant in the area when she heard an explosion, "like a loud pop," and thought the fireworks display may have started early.

Then she and others noticed flames at the hotel and were soon evacuated from the area.

"That fire was big. The fire was just going so fast," she said. "It just started burning real quick."

But the highly anticipated New Year's Eve festivities in the United Arab Emirates' most populous city -- including what was billed as one of the world's largest fireworks displays -- went ahead as planned. Cheering crowds of onlookers watched as bursts of color filled the sky.

Just a few blocks away, the scene was dramatically different.

At the Address hotel, which describes itself as "the premier five-star hotel" in Dubai, flames appeared to be devouring growing portions of the high-rise, even as government officials said the blaze was largely contained.

Maha Abouelnebin, who lives in Dubai, told CNN she was with her family having dinner in the hotel. She saw what appeared to be a low flame and thought maybe someone was cooking something.

Staff were very efficient in moving people out of the hotel, she said. "They got us out calmly... quickly. We were impressed with how easy we got out of there."

Soon Hong, who lives in an apartment across from the mall near the Address, said he was setting up his camera near a window to capture the fireworks when he heard something that drew his attention.

"I looked up, and the entire building was in flames," he said. "It took seconds."

Bruce Szczepanski was setting up a camera on a balcony at a nearby hotel to take pictures of the fireworks when he saw the blaze break out.

"All of the sudden, you saw the flames, and everyone was focused, running to try to get a better vantage point," he said.

Once the fireworks started, he said, he didn't know where to look.

The fire broke out as governments around the world were on high alert for possible terrorist attacks tied to New Year's Eve celebrations, but there was no immediate indication that terrorism was to blame for the blaze.

Jonathan Gilliam, a CNN law-enforcement analyst, said he was surprised by how fast the fire spread.

"This is looking absolutely horrific," he said. "This is spreading very rapidly."

On its website, the hotel says that its "spacious and bright rooms offer a dynamic sense of style and a striking design that appeals to all tastes across the international travel market."

"Dubai's social scene happens here from our stylish rooms to our unique choice of modern outlets, ideal for everything from a social cup of coffee to our fabulous brunches, exquisite dinners and the best late night venues," the hotel website says.

The government's media office said guests evacuated from the hotel would be provided with new accommodations.

Yikes. Major fire in #Dubai at the address hotel, right next to #DubaiFireworks site pic.twitter.com/87Z2cidfYm

A fire has been reported in the Address Downtown hotel. Authorities are currently on-site to address the incident swiftly and safely #Dubai 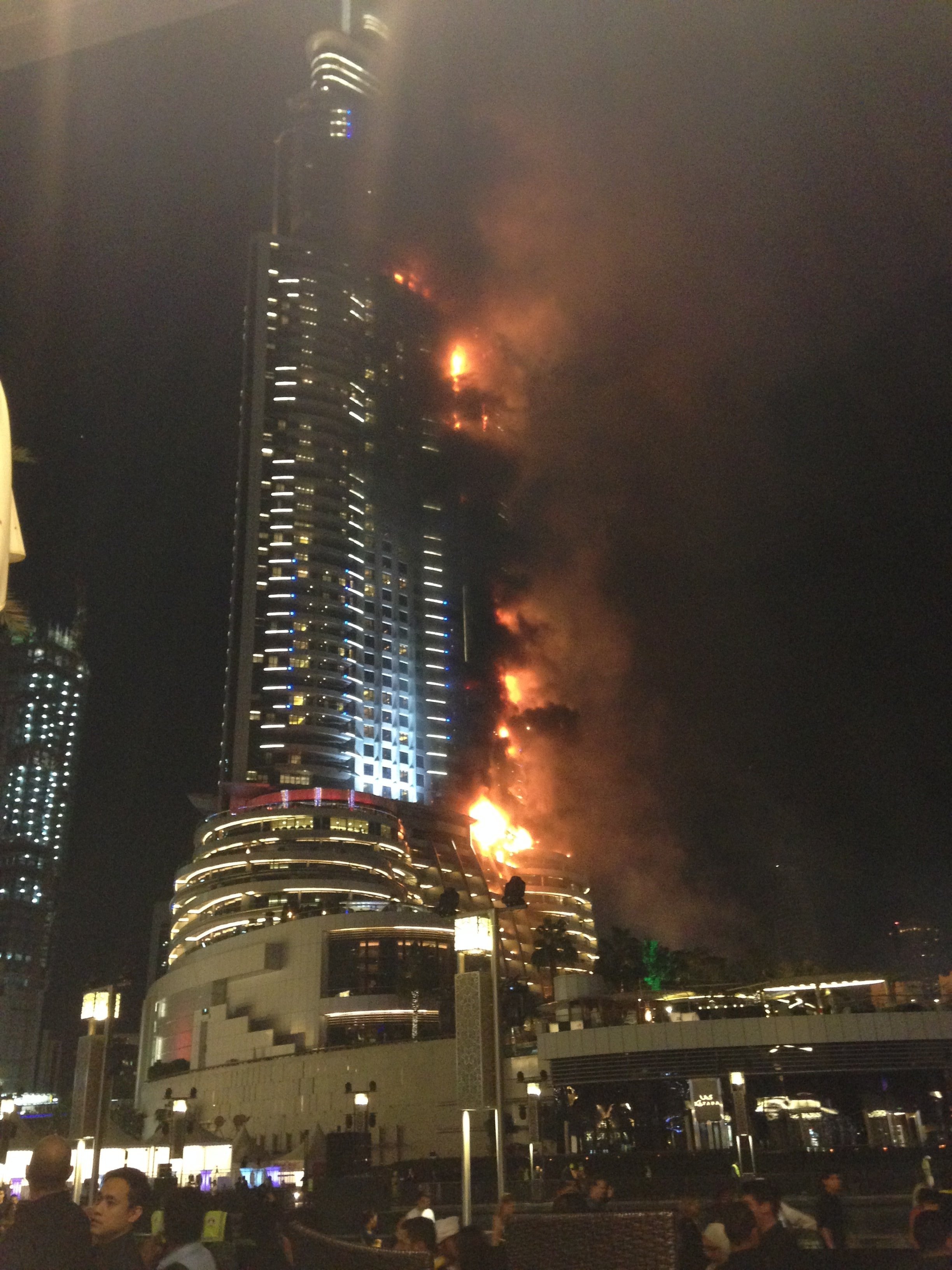