PRINCE GEORGE COUNTY, Va. -- A Prince George woman made a startling discovery, when she came home and noticed her back door was kicked in and her wrapped Christmas presents were stolen.

Jo Baehr was coming home from the grocery store when she arrived to a crumbled door frame.

"They kicked it in, it had a deadbolt on it. The deadbolt was still on, but all the framing and all the door just crumbled, everything fell in," said Baehr.

But that wasn’t all they took.

Baehr said she was moved to tears when she went in her room and saw all her grandchildren’s presents were gone.

“My heart sunk to the ground,” Baehr said. “They took all the wrapped presents, everything that was wrapped, they just scooped them up, one of them fell off, so I got one." 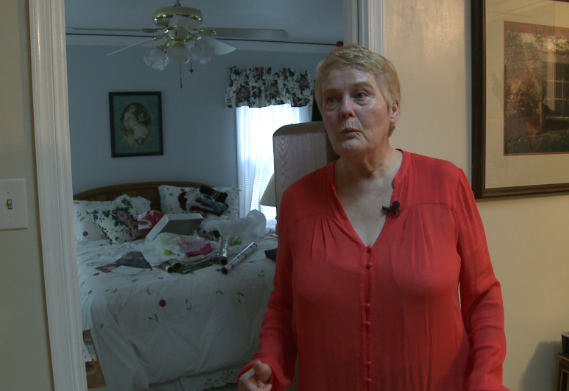 For weeks, Baehr said she has been buying presents for her three grandchildren and children and she was just about to ship them out in time for Christmas.

“That was the hardest part,” she said. “The television wasn’t as bad as the thought that all the hard work and money gone into there (gifts) are gone.”

Baehr’s home is among several Southern Chesterfield, Dinwiddie, Colonial Heights, and Prince George homes that have been broken into since the beginning of December.

"I’m shocked, I’m very shocked. I thought that I would be the only one that this would happen to. If this happened to other people, I’m really sorry for them, because I know exactly how they feel,” Baehr said.

She said it’s tough for her to sleep now as she jumps up every time she hear something drop on the floor.

Neighbors are also concerned. Rebecca Ziegenfuss said she actually heard somebody on her back porch a couple of day ago, but she believes she scared them off.

"I'm very concerned, we have children, there are tons of small children in the area, they will not be able to protect themselves, and there are women like me, stay at home with their children, that could be hurt also."

Baehr said because of this break-in she’s going to make some changes to her home.

“We do have deadlocks on the door, but we’re going to get extra security all around.”