POWHATAN COUNTY, Va. -- A man was killed and his wife was seriously injured Tuesday afternoon when their vehicle was struck by an SUV being pursued by state police on Route 60, in Powhatan County. The crash happened as police attempted to pull over a speeding driver.

"Virginia State Police received a report of a Chevrolet Tahoe driving recklessly in the Cumberland Courthouse area at approximately 12:44 p.m. A trooper observed the reported Chevrolet Tahoe driving 79 mph in the posted 35 mph zone. When the trooper activated his emergency lights and siren, the Tahoe refused to stop and sped at a high speed," Vick said. "As the pursuit came into Powhatan County heading east on Route 60, the suspect vehicle made an abrupt lane change to the right lane and struck a 2009 Kia."

Police said the driver of the Chevrolet has been identified as Andre T. Eanes, 18, of Rice, Va. He was treated for minor injuries. He has been charged with reckless driving.

Additional charges are pending as the incident remains under investigation. The Chevrolet had been reported stolen to the Prince Edward County Sheriff’s Office Tuesday morning. 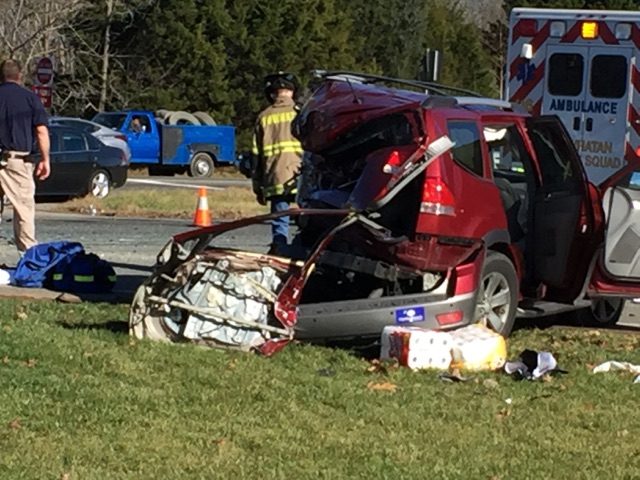 As the chase raced into Powhatan County, witnesses said they heard a huge boom as they were working nearby.

“There was a car chase going on and they hit a couple coming out of the parking lot here, there were cops and everything everywhere,” said Tracy Clark. “It was pretty scary; the car was crushed from the backside.”