David Beckham as the “Sexiest Man Alive”? As they say in soccer: “Gooooaaaaaalll!”

People magazine has selected Beckham, who’s a former athlete, a father, model and husband, as this year’s recipient. The announcement was made Tuesday on “Jimmy Kimmel Live” along with the unveiling of the magazine’s cover heralding the honor.

Beckham appeared on the late-night show via video wearing a mask and with his voice slightly altered as audience members asked questions in an attempt to guess his identity.

“It’s the best moment of my career,” Beckham said, grinning. “I can’t believe it.”

This year marks the 30th anniversary of the title, which is both eagerly awaited and debated by fans.

Beckham, 40, is described as “a global superstar, devoted husband and down-to-earth dad of four” as well as a “humble British heartthrob” by the magazine. He and his wife, former Spice Girl and now fashion mogul Victoria Beckham, are the parents of four children and one of Hollywood’s power couples.

Despite decades of superstardom and scores of fans that he sends into a frenzy, Beckham told People: “I never feel that I’m an attractive, sexy person.”

“I mean I like to wear nice clothes and nice suits and look and feel good, but I don’t ever think of myself that way,” he said. 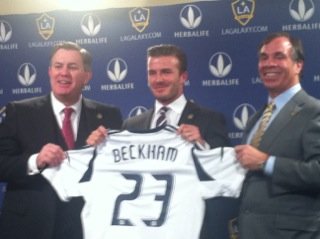