CLICK HERE FOR THE LATEST UPDATE ON THIS DEVELOPING STORY.

Scores of people are reported dead after what are being called terror attacks across Paris. Police early Saturday freed hostages at a concert hall where more than 100 people may have died. The attacks seemed to be planned to hit areas where many people would be gathered on a Friday night, officials said. CNN will update this story as information comes in:

• As many as 118 people were killed in the attacks in Paris, Deputy Mayor Patrick Klugman said Saturday.

• CNN affiliate BFMTV reports that SWAT units stormed the Bataclan concert hall and that the siege is over. Two attackers were killed, a police union said. Police have brought out at least 100 hostages from the concert hall, a CNN producer said; some appear to be wounded. President Francois Hollande was on his way to the concert venue, according to French news agency AFP.

• Deputy Mayor Patrick Klugman told CNN the death toll in the attacks is going to rise significantly. "We are facing an unknown and historic situation in Paris," he said.

• At least 43 people are confirmed dead in multiple attacks across Paris, firefighters said earlier. CNN affiliate BFMTV reported earlier as many as 60 people had been killed. It's unclear whether the total included Bataclan casualties.

• Hollande called the events "unprecedented terrorist attacks" and added, "This is a horror." In a tweet, he said, "Faced with terror, this is a nation that knows how to defend itself, how to mobilize its forces and once again, knows how to overcome the terrorists."

• French radio reporter Julien Pearce was inside the Bataclan theater when gunmen entered. Two men dressed in black started shooting what he described as AK-47s, and after wounded people fell to the floor, the two gunmen shot them again, execution-style, he said. The two men didn't wear masks and didn't say anything. The gunfire lasted 10 to 15 minutes, sending the crowd inside the small concert hall into a screaming panic, said Pearce, who escaped. He said he saw 20 to 25 bodies lying on the floor. Witness describes scene inside theater

• One of the explosions at the Stade de France outside Paris appears to be a suicide bombing, a Western intelligence source receiving direct intelligence from the scene told CNN's Deb Feyerick. A dismembered body, consistent with the aftermath of an explosion from that type of device, was found at the scene, the source said. Watch: Explosion heard at Paris soccer game

• People were inviting people off the streets into their apartments, reports Philip Crowther, Washington correspondent for France 24. They are following Hollande's direction to stay indoors.

YouTube video claiming to be of today's Paris attacks https://t.co/B0azpCyJ91

• Traffic on several subway lines has been interrupted following the attacks, the Paris police prefecture reported.

• At this hour, there is no credible or specific threat in the United States, according to a U.S. government official.

• Hollande, in an address to the nation, said he had declared a state of emergency, meaning borders will be closed. "We have to show compassion and solidarity and we also have to show unity and keep our cool. France must be strong and great," he said.

• The Paris prefecture of police is instructing residents to stay home. The prefecture said via Twitter that people should stay inside "unless there's an absolute necessity."

• French authorities have launched a terrorism investigation, Eric Pelletier, a reporter with Le Pariesien, tells CNN Paul Cruickshank. There has been no official claim of responsibility, though ISIS has applauded the attacks on Twitter, Cruickshank reports.

• "This is an attack not just on Paris, not just on the people on France, but an attack on all humanity and the universal values we share," U.S. President Barack Obama said at the White House. He called the attacks an "outrageous attempt to terrorize innocent civilians."

• At least 60 people have died in the attacks, CNN affiliate BFMTV reported.

• At least six shootings took place in Paris and three explosions took place at the Stade de France in Saint-Denis late Friday, CNN affiliate BFMTV said. Two or three gunmen entered the Bataclan concert hall while opening fire on law enforcement, BFMTV reported. A source earlier told CNN there were six to eight hostage takers, citing a person they were talking to inside the venue.

• A CNN producer who is at the Bataclan says that police are firing at a rooftop position near the venue.

• Hollande was evacuated at halftime of the France-Germany soccer match.

• Counterterrorism officials around the United States have convened secure conference calls to try to gather information and to assess whether there is any indication of threats in the U.S, according to two U.S. counterterrorism officials. Immediate suspicion for the events in Paris falls to so-called returnees -- people who have traveled to Syria and Iraq and have returned, the officials said.

In early January of this year, two gunmen attacked the Paris offices of the French satirical magazine Charlie Hebdo, killing 12 and wounding 11.

Said and Cherif Kouachi wanted to punish the magazine for the publication of cartoons that they believed mocked the Prophet Mohammed. The Kouachi brothers two days later were shot and killed in a standoff with police in Dammartin-en-Goele.

Amedy Coulibaly, an associate of Said and Cherif Kouachi, attacked a Jewish grocery store in Paris, taking more than a dozen people hostage and killing four. Coulibaly had killed a policewoman the day before, on January 8. Coulibaly was killed when police stormed the kosher market. 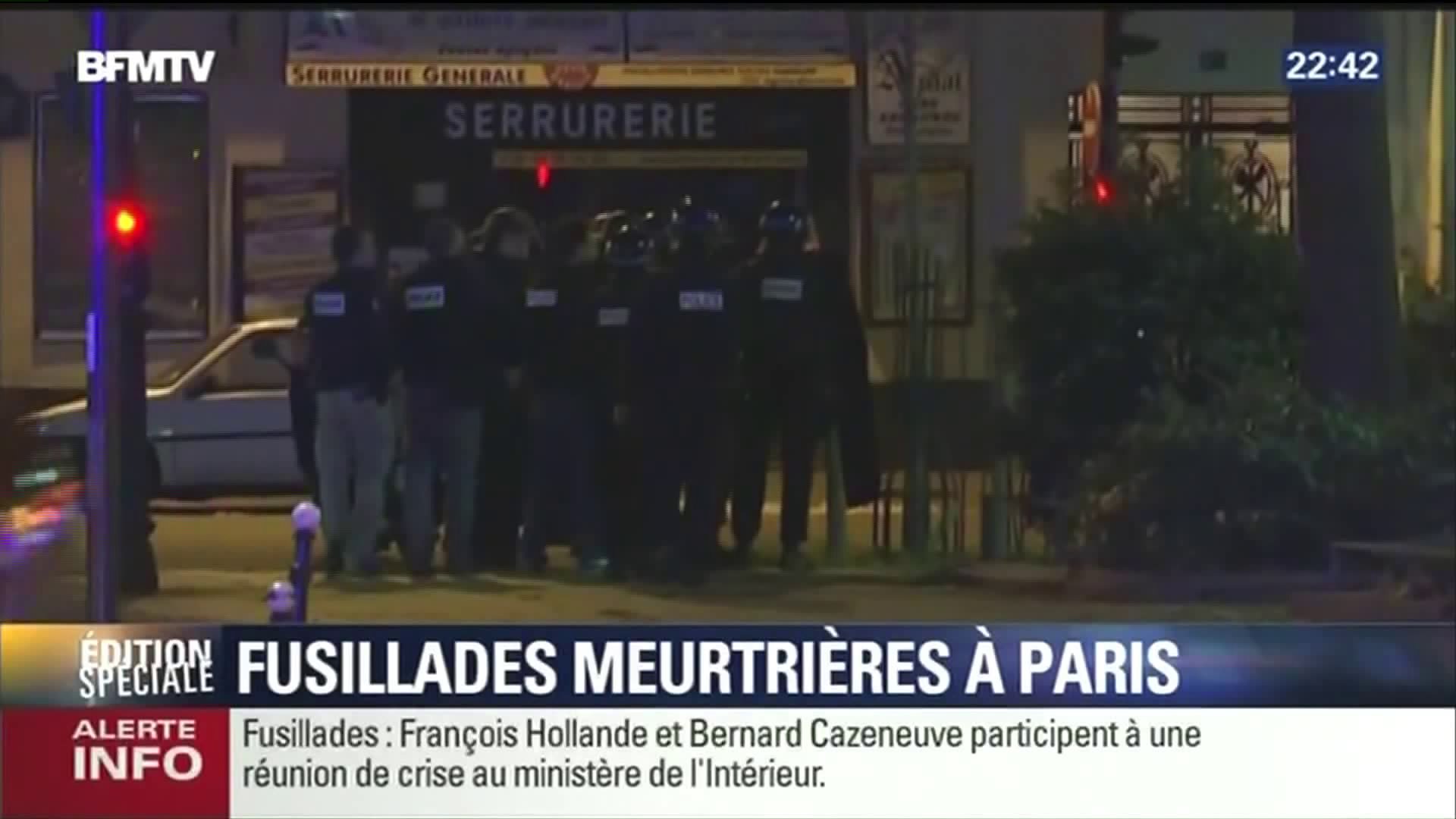