These images were captured inside the gateway bank in the 5300 block of Patterson Avenue shortly before 1 p.m.

Investigators said the crooks, one of whom was wearing an attention-attracting yellow traffic vest, tried to get into the bank. However, the pair could not get inside because the bank’s secondary doors were closed.

Police said one of the suspects showed a gun to a bank employee before they took off.

Anyone with information is asked to call Richmond police. 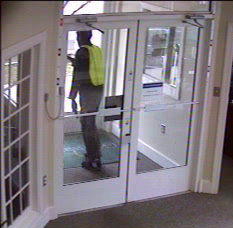