RICHMOND, Va. — Stony Point Fashion Park will undergo a $50 million redevelopment, shopping center managers announced. The planned improvements in 2016 and 2017 are designed to “better serve the region and to further enhance its ambiance to complement the surrounding neighborhood.”

“The neighborhood associations we spoke with said we had a beautiful location and a beautiful center, they just felt additional stores, entertainment options and restaurants would fill a void in the market right now,” Stony Point Fashion Park General Manager Mike Glenn said.

While no new stores nor restaurants were specifically named in the announcement, Starwood indicated there would be an influx of new shopping and dining options. The renovation, managers said, would help attract and motivate new stores to chose Stony Point. 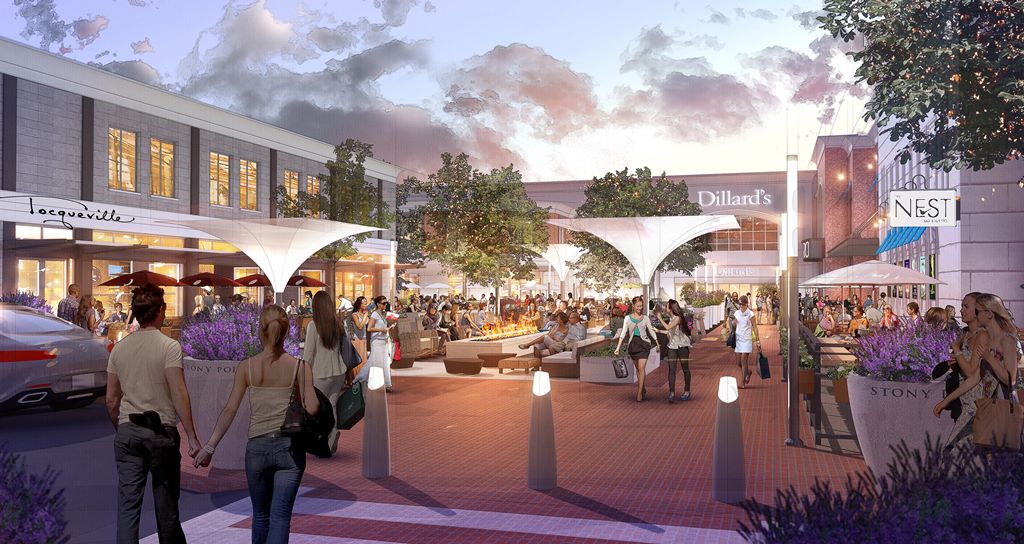 Glenn said the parking lots will be redesigned to allow shoppers better access into Stony Point’s hot spots. In addition to a handful of new restaurants, Glenn said a new playground will cater to the needs of neighborhood parents.

This is what Triangle Park will look.

“We’re trying to stay in step with what neighborhood wants us to do,” he said.  “Aesthetically the center is going to be transformed from the way it looks now.We plan to elevate the gathering spaces.”

Starwood’s redevelopment plans for Stony Point are scheduled to begin in summer 2016 with an upgrade and modernization of the center’s popular outdoor common areas. Both of the center’s east and west courts are getting unique-to-market enhancements. The west court will be home to “The West End,” an eclectic, open-air oasis where guests can play a game of bocce ball after a movie or relax on modern rockers in a lively, inviting courtyard, interspersed with fire pits, fountains and tables.

This is how is how the West End will look

Continuing to spread personality, color, and warmth, “The East Side” will feature a park, entertainment and world-class shopping.

Stony Point guests, tourists and shoppers will enjoy strolling through “Triangle Park,” a welcoming destination with fountains, experiential art, whimsical seating (including heated benches) and space designed for the seasons – a stage for summer events that will transform to a winter ice-skating rink in cooler months.

Further plans for “The East Side” include adding more world-class shopping and entertainment to the center. Starwood will carefully curate boutiques, retailers and additional restaurants to complement the center’s already trendy, sophisticated offering, which ranges from Tiffany & Co. and Sur La Table to Coach, Restoration Hardware and Saks Fifth Avenue.