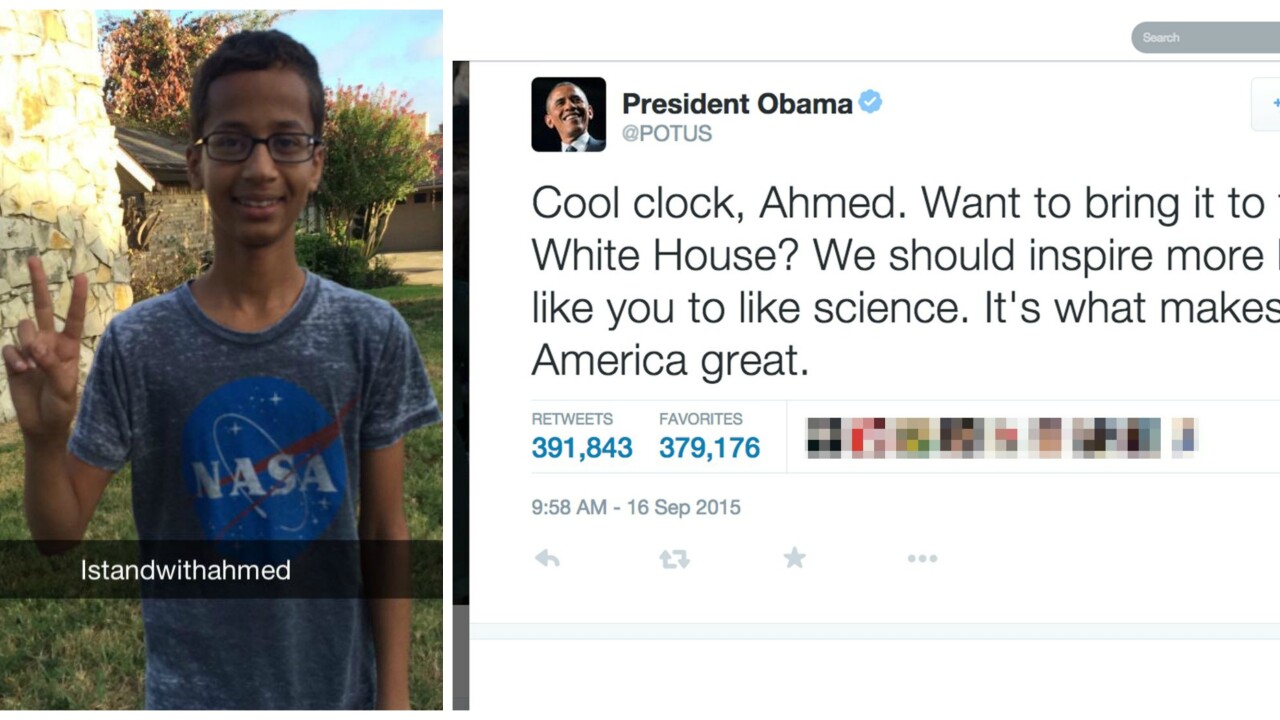 WASHINGTON — A Texas teen who gained national attention after he was arrested for bringing a homemade clock to school is expected to hear from President Barack Obama in person Monday when he participates in the second White House Astronomy Night.

White House Press Secretary Josh Earnest acknowledged that Ahmed Mohamed would be coming to the White House for the event, but said the president isn’t likely to meet with him.

“I don’t believe that the president will have an opportunity to meet one on one with Ahmed Mohamed,” Earnest said. “After all, there are several hundred people who are planning to participate in tonight’s festivities on the South Lawn.”

But, Earnest added, “we certainly are pleased that he will be able to come to the White House to participate in that event.”

In the hours after his arrest last month, #IStandWithAhmed was trending worldwide on Twitter, with critics alleging that Ahmed, 14, was the victim of religious profiling.

Obama added his support to the mix, inviting Ahmed — and his clock — to the White House.

After Ahmed Mohamed was arrested for bringing a homemade digital clock to his high school, he was soon offered a long list of unique opportunities from an invitation to tour MIT to a Space Camp scholarship, including opportunities to intern at Facebook and visit the White House.

Earnest did not know whether Ahmed would be bringing his clock to the White House, even though the president asked him to when he initially invited Ahmed on Twitter.

“Cool clock, Ahmed,” Obama tweeted. “Want to bring it to the White House? We should inspire more kids like you to like science. It’s what makes America great.”

The tweet was followed up with an official invite to Astronomy Night, where Ahmed will be joined by other American students, as well as teachers, scientists and astronauts.

The event, which is being held this year for the second time, aims to promote STEM programs (Science, Technology, Engineering and Math) in schools, and will take place on the White House South Lawn.

Ahmed’s visit to the White House is hardly his only big trip since his rise to fame in September.

In the past month, he, of Irving, Texas, has made a pilgrimage to Mecca with his family, visited Google and met with Queen Rania of Jordan and Prime Minister Ahmet Davutoğlu of Turkey.

He also drew controversy for a visit to Sudan last week, where he met with President Omar al-Bashir, according to the Sudan Tribune.

Bashir is an international pariah who has been charged with genocide by the International Criminal Court.

Mohamed’s father, Mohamed Elhassan Mohamed, immigrated from Sudan and has twice run for that country’s presidency.