TOKYO — One Japanese child will never forget the day he met Boris Johnson.

The London Mayor — nicknamed “BoJo” — was in Tokyo on a trade visit when he took part in a game of rugby.

Unfortunately for Toki Seliguchi, Johnson appeared to stumble while running with the ball and collided with the 10-year-old, sending him crashing to the floor before the British politician helped him to his feet. 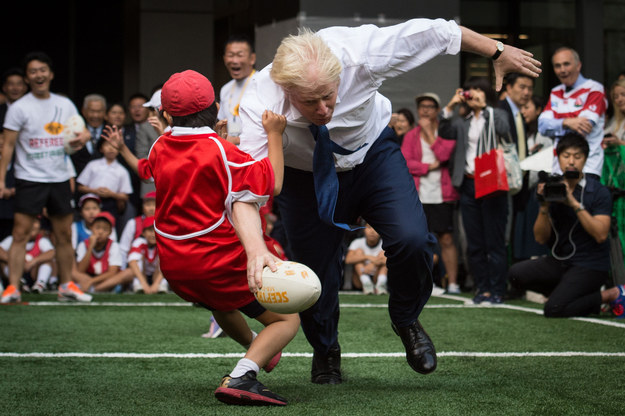 “We have just played a game of street rugby with a bunch of kids and I accidentally flattened a 10-year-old, on TV unfortunately,” the 51-year-old said in a speech to British and American businessmen.

“But, he bounced back, he put it behind him, the smile returned rapidly to his face.”

Seliguchi, who received a rugby ball for his troubles, said he “felt a little bit of pain” after the tackle, although he added that it had been “enjoyable” to meet Johnson.

While Britain hosted the 2012 Olympic Games and is currently staging the 2015 Rugby World Cup, Japan is preparing for an equally busy period in the coming years.

Johnson was in the Japanese capital to formalize an agreement between the two countries which will see Japan learn from London’s experiences.

While England’s rugby team faced the humiliation of being knocked out in the group stage of its home tournament, the Japanese team was lauded for winning three of its four matches — including a stirring victory over South Africa.

Unfortunately it wasn’t enough to see the “Brave Blossoms” reach the quarterfinals but Johnson still took time to praise Japan’s “flair and sportsmanship.”

It’s not the first time Johnson has attracted attention while he’s been playing sport.

Prior to London 2012, Johnson was also left red faced after getting stuck on a zip line while waving two Union Jack flags.