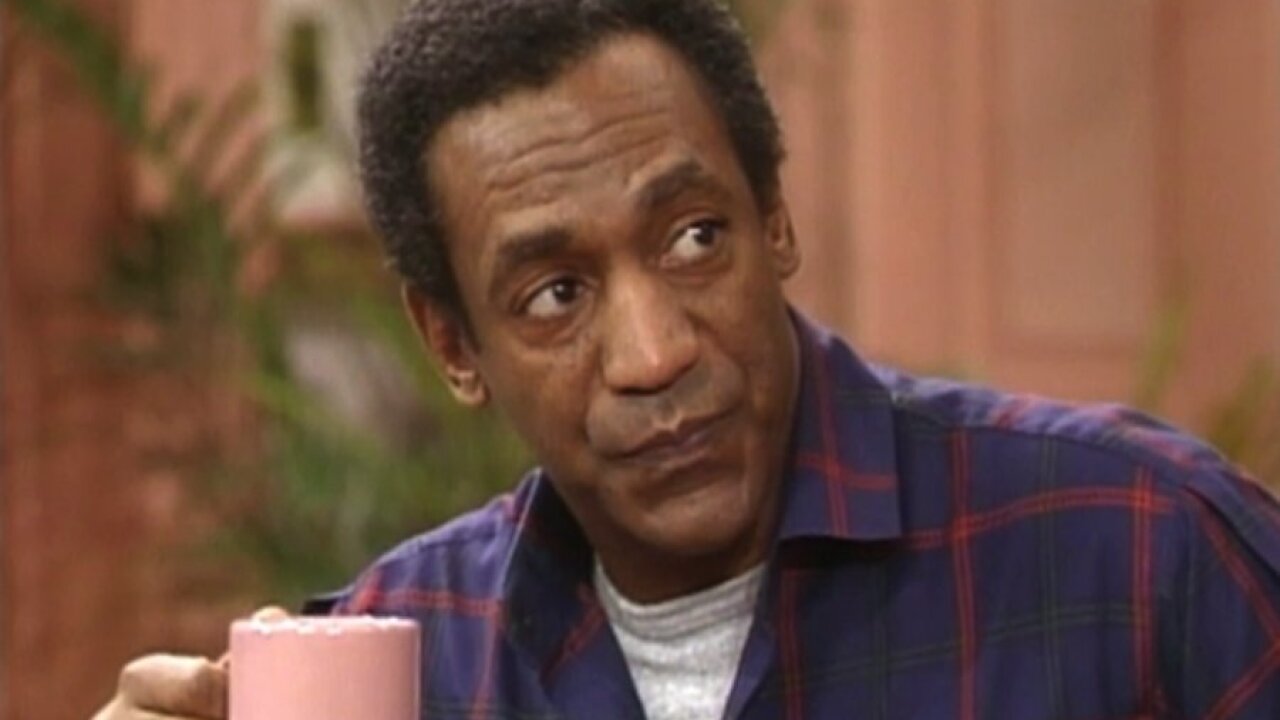 Actor Bill Cosby became one of TV’s favorite dads when he served up tough love to his five children on “The Cosby Show.”

LOS ANGELES — Oh, to be a fly on the wall when Gloria Allred grilled Bill Cosby.

The famed feminist attorney interrogated the 78-year-old comedian and Jell-O huckster under oath Friday in Boston, Massachusetts, about his alleged serial doping and groping of young women. She says no question was off-limits.

A video camera was rolling, but what it captured will remain under seal for at least the next 60 days. The lawyers have been told not to discuss what was said during the deposition.

But it’s no secret that Allred had been eagerly awaiting her moment with a man she views as a sexual predator.

“Mr. Cosby, I’m really looking forward to seeing you in person at this deposition,” she said recently on CNN, adding he “needs to get ready.”

Allred said Saturday that she was able to question Cosby from about 9 a.m. to 4:30 p.m. and wants to ask him more questions. She added, crytpically, that she expects to file legal motions in connection with what took place at the deposition.

It was a week in which Cosby took a bicoastal legal bath. Bids to toss out lawsuits by his accusers failed in both California and Massachusetts.

And he faces a tough weekend in the court of public opinion.

On Friday night, 27 of Cosby’s accusers, ranging in age from 48 to 80, appeared together in the same studio on NBC’s “Dateline.” Several said they were drugged and sexually assaulted by Cosby when they befriended him in hopes he’d help their careers in show business.

More than 40 women have accused Cosby of sexual misconduct over several decades. The star has not been criminally charged and has vehemently denied wrongdoing.

A federal judge in Springfield, near Cosby’s Massachusetts home, ruled Friday that three women can continue to pursue a defamation action against the comedian and his handlers. Tamara Green, Therese Serignese and Linda Traitz allege Cosby and his representatives defamed them while defending Cosby. Their offiicial line had been that the women fabricated sexual abuse allegations against Cosby.

U.S. District Judge Mark Mastroianni ruled that their suit can move ahead, opening the door for other accusers to come forward. The judge said it might be possible for the women to prove that Team Cosby knowingly made false statements as they tried to discredit his accusers.

Earlier this week, a judge in Los Angeles refused to dismiss a lawsuit filed by Allred. The suit claims Cosby molested her client, then 15, at the Playboy Mansion in 1974. Allred’s client, Judy Huth, faces grilling by Cosby’s lawyers next week.

Huth’s is the rare Cosby accuser’s case to make it to court. In other cases, too much time has passed. But because she was 15 at the time, the statute of limitations was extended.

Alllred had planned to keep Cosby in the hot seat for as long as seven hours.

“I think he understands that we will be asking him anything and everything that may bear on his credibility in reference to our client Judith Huth’s allegations about what happened at the Playboy Mansion,” Allred said before the deposition.

“He may try to escape. He’s going to evade, but we’re going to have a lot of questions,” she said. “We are going to be persistent. We want the answers. We’re entitled to get them.”

She had expected resistance from Cosby’s team of high-powered lawyers, which includes Marty Singer, the “bulldog to the stars.”

In a 2005 sworn deposition in a different civil case, Cosby admitted to getting prescription Quaaludes to give to women he wanted to have sex with. The contents of that sealed deposition only recently came to light.

There is a possibility that Cosby may have refused to answer some questions because he faces possible criminal charges in Los Angeles. That case involves a different woman; more than 40 have come forward to accuse Cosby of sexual improprieties, and Allred represents many of them.

It’s what makes her Gloria Allred. She’s been at it for nearly 40 years. The Cosby case ain’t her first rodeo.

Her clients include starlets, personal assistants, nannies and other allegedly wronged women from all walks of life. To say Allred is well-known is an understatement. On her website, she calls herself “the most famous woman attorney practicing law in the nation today.” That might be marketing hyperbole, but she’s so engrained in the popular culture that she has been the subject of a “Saturday Night Live” skit.

Allred often dresses all in red. But she has also been known to wear green, “the color of money,” as a Los Angeles Times reporter once observed. She favors knits from St. John.

Some, including Cosby’s lawyers, consider Allred a shameless publicity hound. In the Cosby case, opposing attorney Singer sneered that Cosby’s deposition was a “publicity stunt” and argued Huth’s suit should be thrown out because she approached a tabloid and attempted to sell her story 10 years ago.

Snickers often fill newsrooms and the law offices of rivals when Allred trots out clients such as Rachel Uchitel and Joslyn James — who allegedly had affairs with golfer Tiger Woods — for the cameras. Allred doesn’t seem to care what her critics say.

Her clients and their cases have changed the course of political campaigns and toppled the heads of major corporations.

Allred has said she is not exploiting her clients, and if they have a story to tell it’s better to get their version out than let the rumors fly. Unlike a lot of other lawyers, Allred is not afraid to go public, even if powerful people don’t like what her clients have to say.

“A lot of my clients have not begun as celebrities,” Allred told CNN in 2010. “They were typical people who were essentially women in crisis, sometimes because of the celebrity man. Because they were involved with a man who was a celebrity, they have become, in a sense, celebrity victims.”

Another prominent Allred target has been the exiled movie director Roman Polanski, who has admitted having sex with a 13-year-old girl in 1977. Authorities in Los Angeles were trying to extradite Polanski from Switzerland but ultimately were not successful. He had pleaded guilty to having sex with a minor but left the United States before he could be sentenced. He’s been gone for nearly 40 years.

At a news conference with Allred in May 2010, actress Charlotte Lewis alleged that five years after he left the United States, Polanski had his way with her, too, in France, when she was of tender years.

“If Charlotte’s allegations are accepted as true,” Allred said, “then Mr. Polanski was able to victimize another child while he was a fugitive from justice.”

Allred doesn’t remember if she paid attention to the Polanski case when it happened. She had just graduated from Loyola Law School and was setting up her firm with fellow Loyola law grads Michael Maroko and Nathan Goldberg. The firm is still going strong, focusing on civil rights, employment discrimination and sexual harassment. The firm doesn’t handle criminal cases, but does represent crime victims.

Allred’s life story, as laid out in the first chapter of her book, “Fight Back and Win,” is reminiscent of that old Virginia Slims advertising slogan, “You’ve come a long way, baby.”

Gloria Rachel Bloom grew up in a working-class family in southwest Philadelphia. Neither parent got past the eighth grade. Her father was a Fuller Brush salesman. Her mother, who was born in Britain, stayed at home and raised her only child. She emphasized education.

Allred got into the prestigious Philadelphia High School for Girls and won a partial scholarship to the University of Pennsylvania. She met a boy at a mixer, married him during her sophomore year and gave birth to her daughter, Lisa, during her junior year. By her senior year, the couple was divorcing and she was a single mother.

Despite her honors degree in English, Allred went to work as a buyer’s assistant at Gimbels department store. She wondered why a man with the same job made $15 a week more than she did.

She got a teaching job at Benjamin Franklin High School in Philadelphia, where most of her students were poor and black. A few years later, in 1966, recruiters from the Los Angeles school district came calling and Allred packed up her daughter and moved to L.A.

That year, she says, while on vacation in Acapulco, Mexico, she was raped at gunpoint by a Mexican doctor, became pregnant and had an illegal abortion that nearly killed her. She did not report the rape, she said, because she didn’t think anyone would believe her.

She taught in the Watts neighborhood of L.A. and became involved in labor issues, and decided a law degree would help with her activism. After law school, she served as president of the Los Angeles chapter of the National Organization for Women. She pressed then-Gov. Jerry Brown to appoint more women as judges, and she began to take on women’s cases.

One of Allred’s most famous cases involved a lawsuit on behalf of an actress on the original “Melrose Place,” who claimed she was wrongfully fired and discriminated against when she became pregnant. Lawyers for Aaron Spelling’s production company said Hunter Tylo broke her contract by making a “material change” to her appearance.

Jurors viewed charts that producers kept of Tylo’s projected weight gain showing she would weigh 144 pounds when it was time to shoot a key bikini scene. Jurors also saw scenes in which star Heather Locklear’s baby bump was hidden behind furniture and leopard print sheets. Tylo revealed from the witness stand that she was eight months pregnant. She did not look it, and jurors awarded her nearly $5 million in damages.

Allred’s targets: “I go after these guys who have hurt women.”