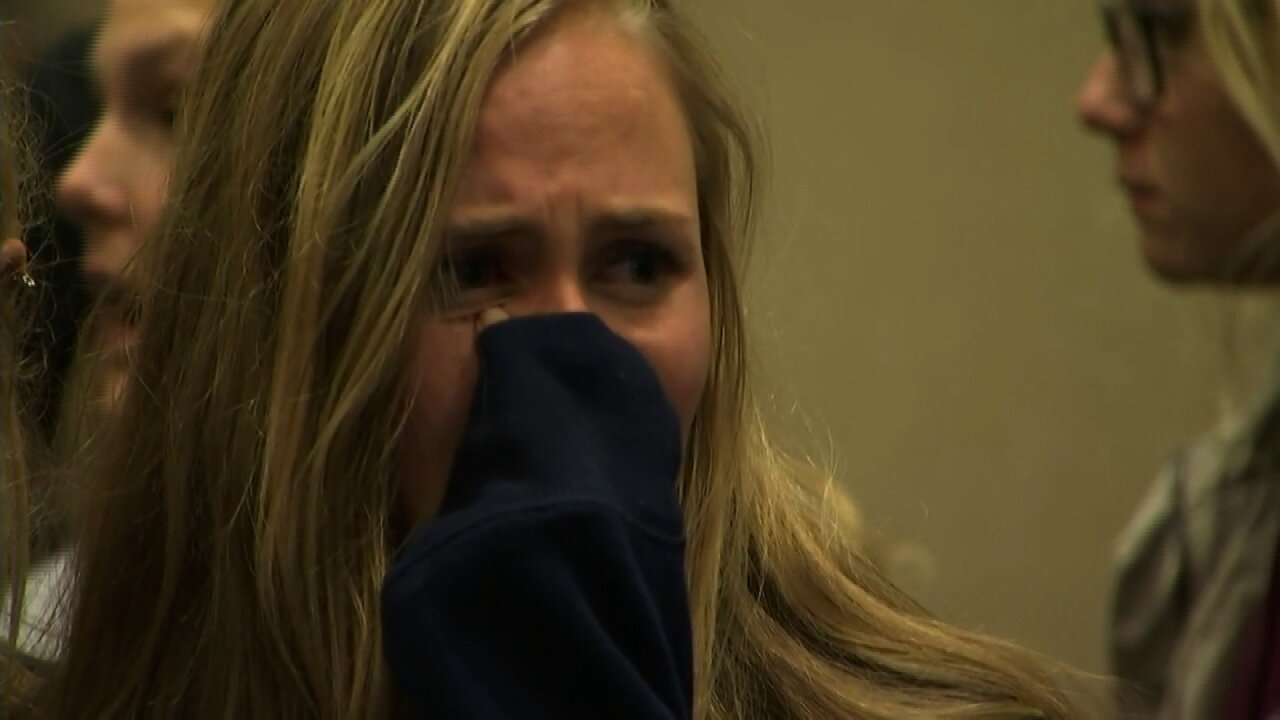 Embargoed to Phoenix, AZ Students gather after a shooting at Northern Arizona University.

FLAGSTAFF, Arizona — A confrontation between students in a parking lot at Northern Arizona University turned deadly early Friday when, police say, a freshman pulled a gun and shot four male students, killing one.

The identities of the slain and injured students have not been released, and it was not immediately clear what the conditions of the injured were. They are being treated at Flagstaff Medical Center.

Fowler said it appeared the victims had been shot multiple times.

Delta Chi fraternity said Friday that some members of its Northern Arizona University chapter were involved in the shooting, but that it did not have details about their conditions. The shooting, the fraternity said, “was not a chapter-related incident.”

“This is not going to be a normal day at NAU,” she told reporters. “Our hearts are heavy.”

Students, appearing weary and shocked, attended a news conference on the shooting. Some questioned why it took more than an hour after the shooting for text notifications warning of danger to go out to the university community.

Junior Megan Aardahl told CNN she awoke to text messages from the school and her family checking to see if she was OK. She said the incident rattled her and other students.

“There’s a huge sense of community here, so everyone’s just trying to like reach out and make sure everyone’s OK, but it’s a little anxious not knowing who’s involved,” she said.

Fowler said he couldn’t immediately explain the messaging delays but said officers sent initial alerts out of an abundance of caution even though the situation was under control and there was no danger to students.

“This heartbreaking incident will impact many of our fellow citizens, and I ask all Arizonans to keep them and the family of the individual lost in their thoughts and prayers as they cope with this tragedy,” he said.

“My thoughts and prayers are with families of the person who was killed and the three others who were wounded in the horrific shooting on the campus of Northern Arizona University in Flagstaff early this morning,” he said. “I appreciate the efforts of all state and local law enforcement officials, first-responders and school administrators, and continue to pray for the recovery of the injured, as well as all those in the NAU community who have been impacted by this terrible tragedy.”

The shooting comes the same day President Barack Obama is set to visit Roseburg, Oregon, and the families of those slain in the October 1 massacre at Umpqua Community College.

The gunman in that case, Chris Harper-Mercer, 26, killed nine people before killing himself, according to police.