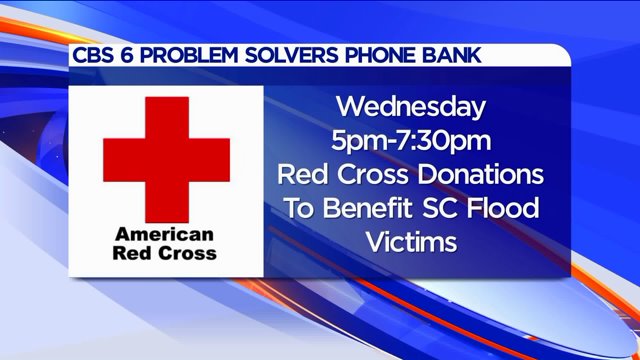 CBS 6 to host phone bank to raise money for victims. 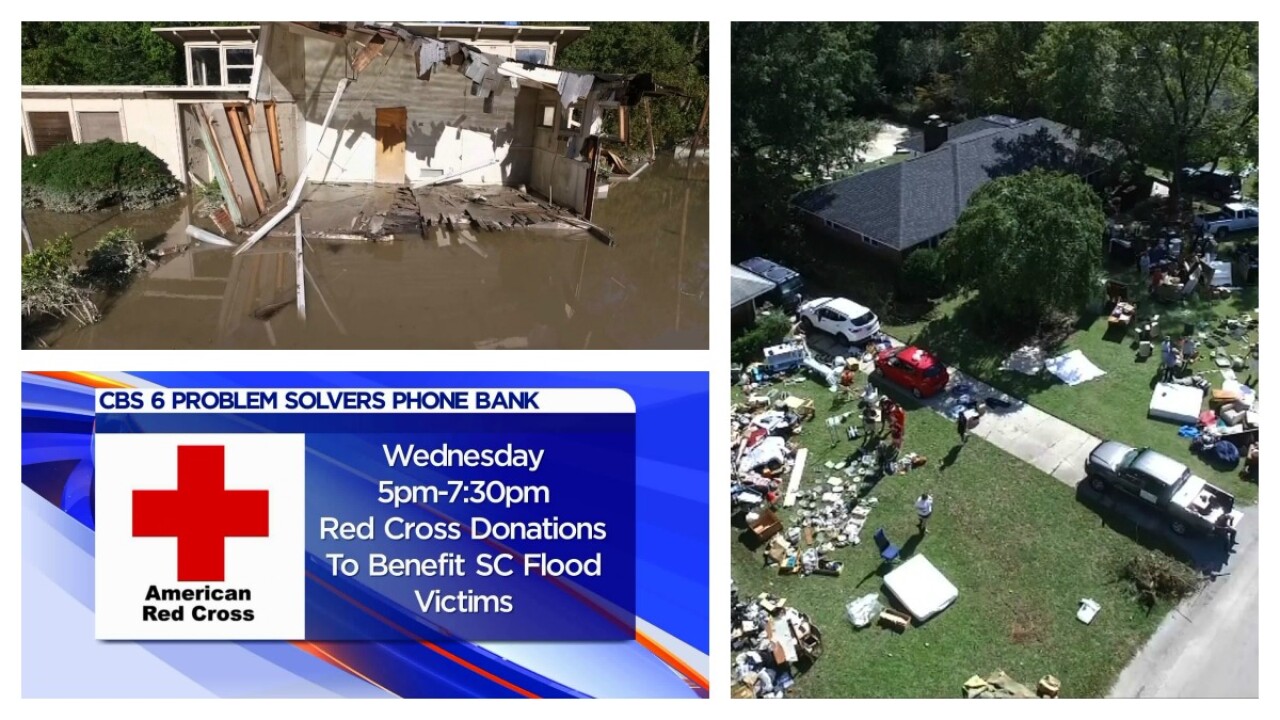 CBS 6 and the Red Cross are teaming up to hold a phone bank on Wednesday, Oct. 7, for flood victims in South Carolina.

All the money raised will go to the American Red Cross to distribute to victims.

The rain may have stopped, but South Carolina is grappling with a host of new concerns. Dam breaks. Billions of dollars in damage. And rivers that still haven't crested.

"We still have to be cautious," Gov. Nikki Haley told reporters on Tuesday afternoon. "The next 36 to 48 hours are going to be a time that we need to continue to be careful."

Haley declined to provide an estimated cost of the damage -- which she called "disturbing" -- but said state and Federal Emergency Management Agency officials were making assessments.

"It's hard to look at the loss we're going to have," she said. "This could be any amount of dollars."

More than 400,000 state residents were under a "boil water advisory" affecting about 16 water systems, said Jim Beasley, a spokesman for the S.C. Emergency Response Team.

Here's the latest on the mammoth flooding in the region:

At least 11 dams have failed in South Carolina since Saturday, the state's Emergency Management Division said. Another 35 dams were being monitored.

One failure, of the Overcreek Bridge dam in Richland County's Forest Acres, sent a torrent of floodwater raging downstream and forced evacuations near Columbia.

Officials allowed water to breach at least one other dam, also in Richland County. Officials conduct these controlled breaches "to prevent a much larger incident and a much larger amount of water escaping from the dam," emergency management spokesman Derrec Becker said.

So far, at least 17 people have died in weather-related incidents: 15 in South Carolina and two in North Carolina.

Haley said there had been 175 water rescues so far in South Carolina, and more than 800 people were temporarily housed in shelters.

More than 70 miles of Interstate 95 in the state remained closed, with five to eight bridges still awaiting structural checks, she said.

Of all the scenes of items drifting away in the flooding, perhaps none appeared as dramatic as a casket unearthed from a cemetery.

Wayne Reeves, pastor of New Life Ministries in Summerville, was in the middle of an interview when he saw the casket float away.

So he headed into the waist-deep floodwater to retrieve it.

"That's somebody's family out there," he told CNN affiliate WCBD-TV. "That's (a) family suffering. That's their family there that popped up from under the ground. And I think it's the human thing to do."

The casket, still adorned with white and pink flowers, carried the remains of a woman buried in May, WCBD said. Another casket, that of the woman's husband, also drifted away, but Dorchester County sheriff's officials later recovered it.

As it turned out, the woman's family was watching nearby as Reeves went into the water.

"This family don't want to sit on the edge of this road all night long watching their family members bob in the water like that," the pastor told WCBD.

"If that was my mom or my dad, I'd walk through hell and high water. And today it happened to be high water."

Some Columbia residents left their homes as victims of flooding. They returned to find their homes looted.

So rescue crews in boats came to the complex and helped residents to safety.

On Monday, Pamela Courts returned to her apartment and found not just flood damage but signs of theft.

"Overnight, we had a break-in, so whatever was upstairs they came and took: TVs, jewelry, everything," she told WACH.

Resident Juamaame Evins told the affiliate he was trying to stay positive despite the back-to-back hardships.

"Even though we lost everything and stuff got stolen, we can rebuild together and help each other and be each other's backbones and carry each other through this time because we need each other," he said.

The flooding is far from over. Rivers might not crest for another two weeks, CNN meteorologist Chad Myers said.

And the mayor of Columbia, who has said he believes damage "will probably be in the billions of dollars," is bracing for more trouble.

"We aren't close to being out of the woods," Mayor Steve Benjamin said Tuesday, adding that even more dams could be in danger of breaking or being topped by water. "We still expect the water to start coming down from the Upstate, coming downhill to the Midlands."

The situation is the result of a weather system that funneled tropical moisture into South Carolina last week and refused to move on, Myers said.

"It was a garden hose that just kept pouring ashore in one spot, and that spot was South Carolina," he said.

Flooding conditions could force the South Carolina Gamecocks to move Saturday's game against Louisiana State University to Baton Rouge, University of South Carolina Athletics Director Ray Tanner said. The school hopes to make a decision in the next day or two.

The University of South Carolina has canceled classes through Friday, saying that resuming normal operations for its 34,000 students and 6,000 faculty would "place an undue burden on a recovering infrastructure in the city."