Oregon college shooting survivor: ‘I lived because I played dead’ 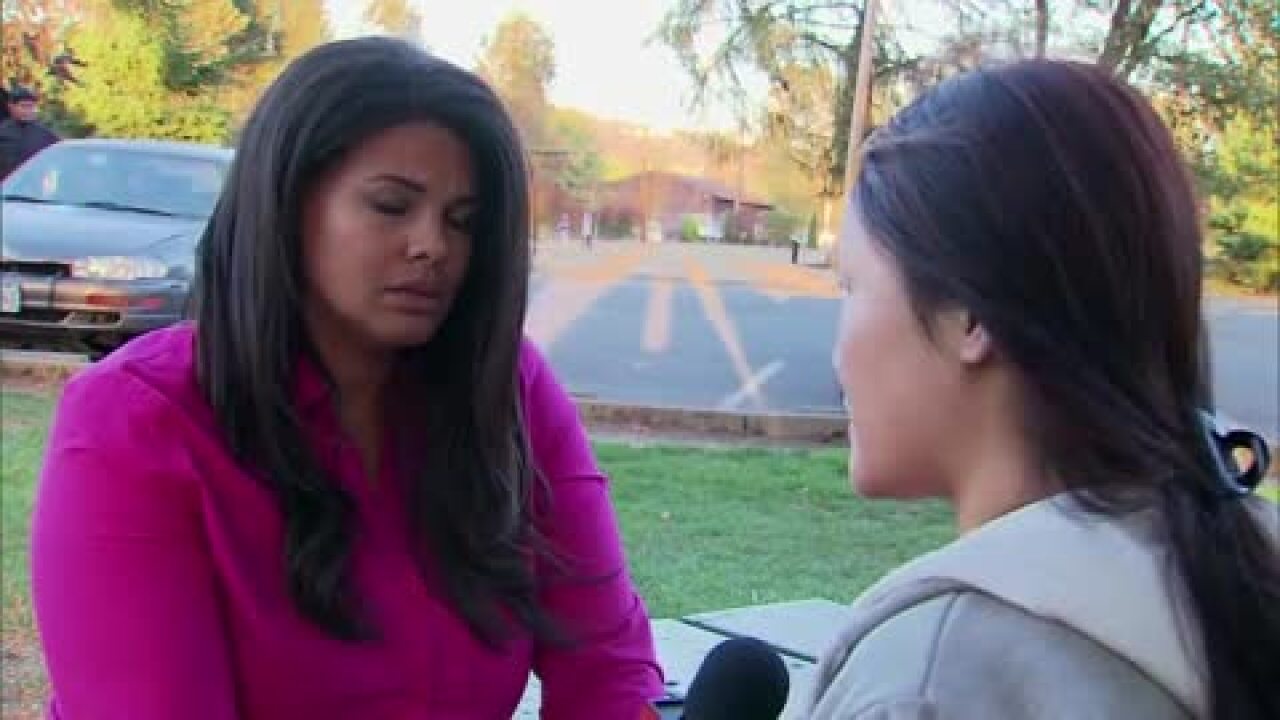 ROSEBURG, Oregon  — Tracy Heu sat in the front row of her writing class Thursday, with her future ahead of her: She was on her way to becoming a licensed practical nurse, living a life of service and providing for her three children.

Then the classroom door opened. And her future changed.

“He just came in and shot toward the back of the wall,” Heu said of the 26-year-old man who walked into the college classroom firing a single gunshot. “He told everybody to get in the center of the room.”

As Heu huddled with her classmates on the ground, Sarena Moore tried to join them. She climbed out of her wheelchair, but the gunman told her to get back in it.

“She tried to climb back on the chair and then he shot her,” Heu said.

Moore died next to her service dog, which was quietly by her side, unharmed. She had named her dog Bullet. Bullet survived.

As the shooting continued, Heu clutched the ground next to her classmates, and the gunman turned his attention to Larry Levine, professor of the writing class at Umpqua.

“He was trying to crawl down to the ground with us,” Heu told CNN. “And (the gunman) shot the professor and then he just started shooting everybody on the ground.”

Taking a bullet in her hand and suffering two broken bones, Heu lay on the ground covered in the blood from a student next to her who had been shot in the head. She feared the worst was still to come.

Student appointed ‘the lucky one’

Heu didn’t know it, but the man who seemed to control her fate was actually enrolled in the class. The semester was new, and it was only the second time Intro to Expository Writing had convened in Room 15 of Snyder Hall. Few classmates had had a chance to meet.

Now they were closer than ever, huddled on the ground, trying not to draw attention as the shooter, wearing a bulletproof vest, addressed those still alive.

“He seemed like he was excited about everything. He was happy,” Heu said. “He was saying that he was going to join us — and he specified one or two minutes, and that he’ll make it not painful at all. He’ll make it quick and easy.”

Then Heu recalls the gunman pointing to another student, telling him to stand: “He said that ‘You’re the lucky one, I’m going to let you live.’ But I’m going to need you to tell the police everything that happened and give them this.”

He handed the student an envelope and told him to stand in the corner.

” ‘If you do all that, then I won’t kill you,’ ” Heu said, recalling the gunman’s instructions. “That’s when I thought he was going to kill everybody (else). Not let anybody live.”

One by one, the gunman called for individuals to stand up — performing a grim roll call to find out their religion.

“He asked them, ‘Are you Christian? Do you believe in God?’ ” Heu said. “And then they said yes and he said, ‘Good, I’ll send you to God. You’ll be visiting God pretty soon,’ and he shoots them.”

Another time Heu said the shooter asked if someone was Catholic “and they said ‘yeah’ and he still shot them.”

Heu remained face-down in a pool of blood — a morbid cover that ultimately saved her life.

“I didn’t want him to notice that I was still alive, so that he wouldn’t point me up,” she said. “He was telling (people) that he knows they are still alive and for them to get up.”

Each time someone stood, Heu said, he or she was shot regardless of the answer.

“I don’t think he was actually targeting a specific religion,” she said. “He just wanted to do it for fun, ’cause he still shot every single one. He started shooting people before even asking.”

By now everyone in Snyder Hall knew a mass shooting was underway. Most students fled to safety or remained locked in their rooms, but Chris Mintz went toward the gunfire.

“He opened the door and tried to intervene,” Heu said. “I heard him screaming, ‘I have a 6-year-old son, his birthday is today.’ But (the gunman) still shot him.”

For Heu, his shooting was further proof of the madness behind the gunman’s eyes.

“He didn’t give anybody any kind of remorse.”

‘I was trying to get out of it alive’

Though fearing death, Heu still had a will to live. Thoughts of her husband and three children, ages 6, 12 and 13, kept her from giving up.

She risked her life by whispering to another survivor: “He’s only one person. We just got to do something about it or we’re all just going to die,” she said.

A little more than 10 minutes into the ordeal, Heu heard more gunfire. This time some of it came from Roseburg police officers.

She assumed the gunman had shot himself. (The medical examiner later ruled his death a suicide.)

The next voice she heard was from the boy in the corner holding the envelope. His name was Matthew.

“He’s down,” she recalled Matthew saying. “Everybody get up.”

Only a few people moved; nine others lay dead. Heu peeked out the door and ran across the hall to the men’s bathroom. She saw a gun inside and screamed to another girl to get out. By then, police and paramedics had swarmed the building.

“They thought I was injured because I was soaked in blood from head to toe,” Heu said. “I told them I am fine and to go to the other people.”

Heu said she turned to Matthew, the “lucky one,” who offered his sweater to wipe off the blood.

“He gave me a hug and said everything was going to be OK.”

Sitting on a park bench, in the calming glow of the late afternoon sun, Heu recounted her survival story two days later — two days after thinking she would never see her children again.

Now her youngest son is just steps away on the playground. Her husband looks on as Heu, wearing a cast on her arm, explains how she’ll summon the courage to return to class and get her degree.

“I just got to stay strong and look forward and keep on doing what I am doing,” she said. “I can’t really do anything else.”

Gathering her family, she strolls toward her car. Though the gunman’s horrific actions had altered her course, Heu is once again reclaiming her future.