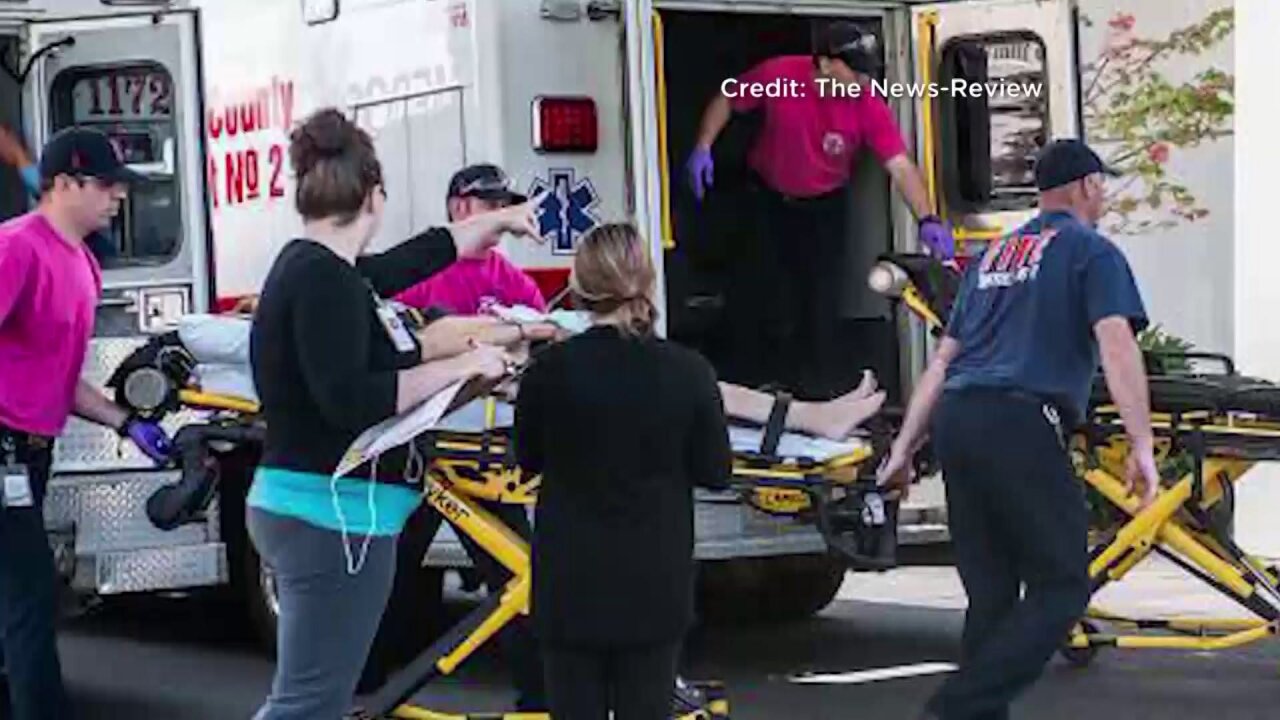 ROSEBURG, Oregon — He showed no mercy. He ordered his victims to the ground and shot them even if they complied. He asked them their religion but shot them no matter the answer. He even shot a woman in a wheelchair.

The description of the shooting that left nine dead at Umpqua Community College in Oregon came from one of the survivors, a woman who was shot in the hand.

The mother of another survivor said the shooter spared her son so he could deliver a message to police — but then made him watch as his classmates were killed.

“The shooter asked him to give the police something, and that if he did, he would live,” Summer Smith told CNN’s Dan Simon.

“Mathew said at that point, he didn’t quite get what the shooter said. He thought he was standing up to die, and that when the shooter gave him what he was told to give to police, he was then sent to sit in the back of the room … and to watch what was going on.”

The female survivor, Tracey Hue, told CNN’s Sara Sidner in an exclusive interview that she was sitting at the front of the classroom, facing the teacher, when the gunman entered with a shot.

“He just came in and shot towards the back of the wall and told everybody to get in the center of the room and on the ground,” Hue said.

The shooter, Chris Harper-Mercer, 26, had guns and wore body armor, she said, and seemed determined to shoot. He didn’t appear anxious or stressed, but rather “he seemed happy about it,” Hue said.

Hue, a mother of three, said she’s just happy to be alive. She and two other people were the only ones able to walk out of the classroom. Everyone else was either too wounded — or dead.

Those killed ranged in age from 18 to 67 and included a woman in a wheelchair, Sarena Moore, 44, who was in the class with her service dog.

“When he came in, he told everybody to get on the ground. Everybody tried to huddle to the ground,” she said, including Moore.

Survivors have said the gunman gave an envelope to someone in the classroom, telling the student he would live if he gave it to police.

Smith told CNN that person was her 18-year-old son, Mathew. She said she didn’t want to reveal his last name.

Smith said that after three people were shot and killed, the gunman paused and spotted her son. “Hey you, with the glasses,” he called out.

“The shooter asked him to give the police something, and that if he did, he would live,” Smith said.

“Mathew said at that point, he didn’t quite get what the shooter said. He thought he was standing up to die, and that when the shooter gave him what he was told to give to police, he was then sent to sit in the back of the room … and to watch what was going on.”

Her son did as he was told, she said.

“Mathew said that he froze. He didn’t make a single move. He was afraid to look away. That if he … did anything to make the shooter notice him, that he would be shot. So he just sat there,” Smith said.

Mathew never saw the contents of the envelope but could feel a computer flash drive inside, his mother said. He gave it to police.

Law enforcement officials familiar with the investigation have told CNN the gunman handed his “writings” to a survivor, telling that person to give it to police, but they haven’t elaborated on the form in which they were delivered.

Those officials say the writings indicate the shooter studied past mass shootings and identified with the perpetrators of those rampages. The shooter also expressed frustration at not having a girlfriend and being a virgin, the law enforcement officials say.

Survivor says religion not a factor

Relatives of two wounded victims have said the gunman asked his victims about their religion before he shot them.

One victim, Cheyeanne Fitzgerald, didn’t answer and was shot in the back, her mother said. Another victim, Anastasia Boylan, told her father the gunman asked specifically whether they were Christians.

Hue also said the gunman asked about religion. But she said it didn’t seem to matter, because he shot some people even before he asked.

Covered in someone else’s blood, expecting to die, Hue said she played dead. Her head was on the ground and she tried not to look up so the shooter wouldn’t see she was still alive.

‘She had a big heart’

Moore was an active member of the Grants Pass church for several years and continued to visit occasionally when in town to see one of her three sons, Martin said.

He said Moore, who was in her third semester studying business at the college, “had a big heart.”

“Sarena was one who, when she got to know someone, they became a close friend, a good friend,” Martin told CNN. “She easily made friends, she easily won hearts.”

Sciatica was the reason she used a wheelchair, but it was for convenience and comfort and wasn’t a necessity, he said.

Moore was also the caretaker for her boyfriend and the church has helped make sure he will be taken care of, Martin said. The church has also set up a fund to assist the family financially.

Saturday’s weekly service became a special tribute to Moore that included songs, prayer and a moment of silence.

“We drew attention to the legacy that we all believe Sarena has left, and that is she was passionate and devoted and a firm believer in the power of prayer,” Martin said.

“She always gave God credit for the way in which he opened doors for her to enroll as a student. … She always asked for prayer from many, many people, and so we were recalling the emphasis she always made on prayer.”

As Seventh-Day Adventists, Martin said, they believe they will one day see Moore again.

“For us it’s not goodbye forever, but ‘see you then,’ reunited together at the resurrection morning. So that’s our blessed hope.”

Harper-Mercer was enrolled in the class he targeted Thursday — an English class taught by one of his victims, Lawrence Levine, 67.

The gunman died after a shootout with police, but the state medical examiner has determined his death was a suicide, said Douglas County Sheriff John Hanlin.

Investigators have found 14 firearms connected to the shooter, authorities said. Five pistols and one rifle were found at the college and the others were at his apartment, Celinez Nunez of the Bureau of Alcohol, Tobacco, Firearms and Explosives said.

The gunman’s father, Ian Mercer, says he was unaware his son had any firearms.