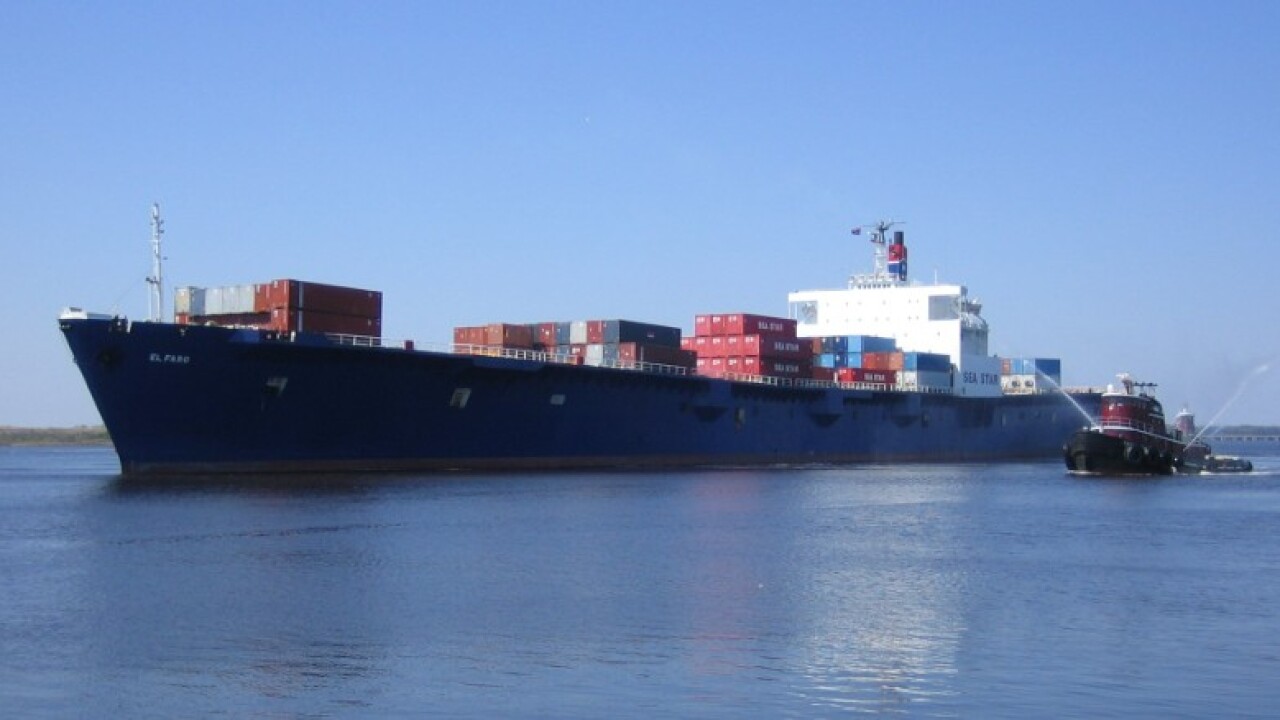 JACKSONVILLE, Fla. — The massive search for a container ship in the Caribbean Sea has yielded a 225-square-mile debris field, but no sign of the ship itself.

The vessel, named El Faro, was carrying a crew of 28 Americans and five Polish nationals when it went missing near the Bahamas last week as Hurricane Joaquin, with winds blowing at 130 mph, passed over the archipelago.

El Faro, based in Jacksonville, Florida, was headed to San Juan, Puerto Rico.

The U.S. Coast Guard reported Sunday evening that it had discovered the 225-square-mile debris field, which consisted of Styrofoam, wood, cargo and other items.

The announcement came hours after the agency said searchers had found “multiple items,” including an oil sheen, life jackets and containers in the same search area.

The company that owns the 790-foot ship, TOTE Maritime Puerto Rico, released a statement saying that a recovered container “appears to be from the El Faro,” but according to the Coast Guard, there is no confirmation at this point that it or any of the missing objects belong to the missing vessel.

“We located the objects via aircraft,” explained Lt. Cmdr. Gabe Somma, who also said that Coast Guard cutters were still fighting the weather trying to get to the vicinity of the ship’s last known position, about 35 nautical miles northeast of the Bahamas.

The Coast Guard said Sunday evening that the search teams, which also include personnel and resources from U.S. Air Force and the U.S. Navy, have covered more than 70,000 square miles.

Still, no sign of the El Faro or of any lifeboats, according to TOTE.

“With every passing hour, the search expands. When you’re searching for something in the ocean, tracking the drift patterns and dealing with weather elements — things are moving,” said Somma, describing the challenges of the search.

Phil Greene, the president of TOTE, told CNN affiliate WFOX/WSVN that a majority of the ship’s crew members had ties to the Jacksonville area, but it has not released any of their names to the media.

Greene said his focus is on their families, whom he says he’s been “upfront” with throughout the ordeal.

CNN affiliate WGME in Portland, Maine, said at least four of the missing Americans, including El Faro’s captain, are from Maine, and that two of them not only graduated from the same high school, but from the same college; Maine Maritime Academy.

CNN reached out to Maine Maritime Academy Sunday night but did not immediately hear back.

The El Faro set out Tuesday on what ordinarily should have been a routine voyage from Jacksonville, Florida, to Puerto Rico.

But then Hurricane Joaquin barreled into the area, growing in strength as it came.

Though family members told WFOX/WSVN that they questioned why the ship sailed into what was then a tropical storm, Greene told the station that the boat’s captain felt the conditions were favorable and “was very confident the ship was doing well, the crew was quite up to date.”

The mother of one of the missing crew members told WGME said she did not blame the captain.

“The blame that has to be done is on the hurricane, not the captain,” she said. “The captain is looking out for his crew.”