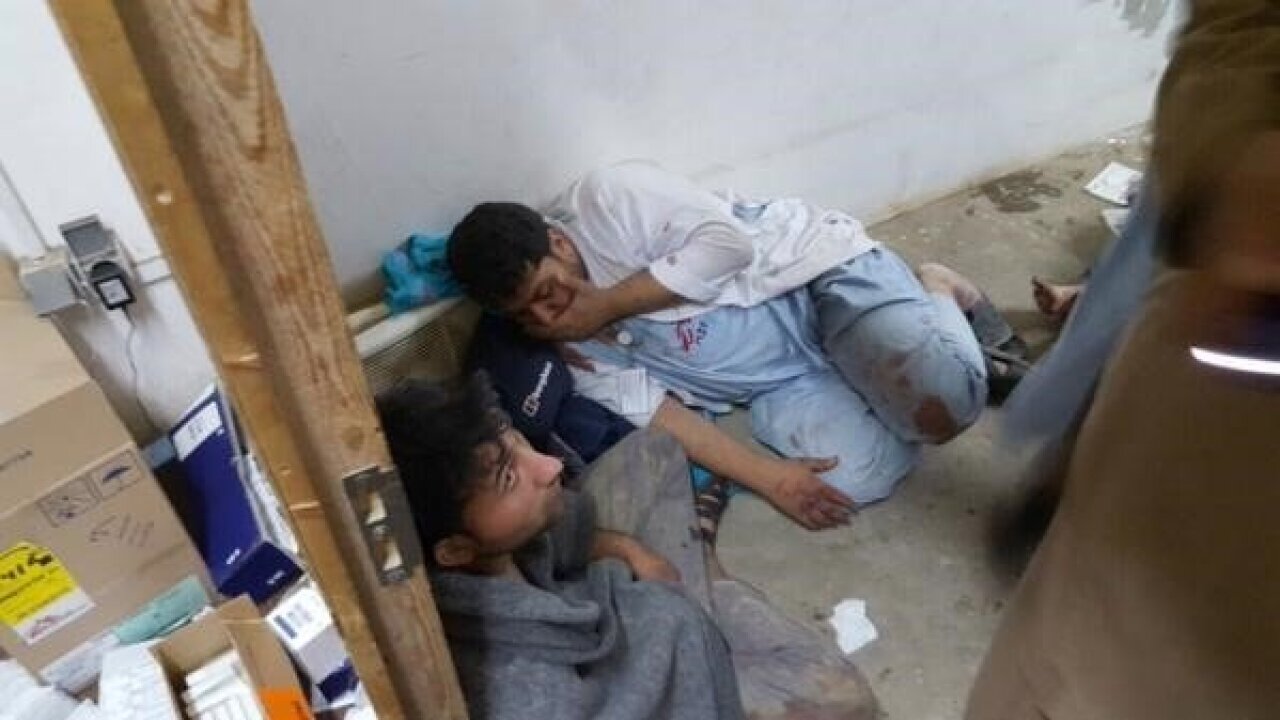 Photo: Aftermath of the bombing that left 3 staff dead and many poeple wounded Three MSF staff were killed and more than 30 are currently unaccounted for when the trauma center they were working in was hit several times during sustained bombing around 2.10a local Saturday morning, according to an MSF statement. Bart Janssens, MSF Director of Operations said: “We do not yet have the final casualty figures, but our medical team are providing first aid and treating the injured patients and MSF personnel and accounting for the deceased. In a statement e-mailed to media the Taliban allege that American forces carried out the strikes that hit the hospital in Kunduz city. Since fighting broke out Monday, MSF staff have treated 394 wounded individuals. When the aerial attack occurred Saturday morning 105 patients and their caretakers were in the hospital and over 80 MSF international and national staff present.

KUNDUZ, Afghanistan — A Doctors Without Borders hospital in Afghanistan was struck accidentally after Afghan forces called for air support from the American military, the commander of U.S. forces in Afghanistan says.

The deadly bombing of the hospital in the embattled Afghan city of Kunduz over the weekend has prompted outrage around the world.

Addressing reporters at the Pentagon Monday, General John Campbell said initial reports had indicated that the airstrike was called to protect U.S. forces

“We have now learned that on October 3 Afghan forces advised that they were taking fire from enemy positions and asked for air support from U.S. forces,” he said. “An airstrike was then called to eliminate the Taliban threat and several innocent civilians were accidentally struck.”

Campbell offered his “deepest condolences” to the victims.

The United States is investigating what happened.

But Doctors Without Borders — also known as Medecins Sans Frontieres (MSF) — is demanding an independent inquiry into what it is calling “a war crime.”

Here’s what we know so far about the attack that killed 22 people, nearly half of them hospital patients:

MSF says its hospital was hit by “a series of aerial bombing raids at approximately 15 minute intervals” between 2:08 a.m. and 3:15 a.m. Saturday. The bombardments continued even after U.S. and Afghan military officials were notified the hospital was being attacked, the charity said.

On Sunday, the NATO-led international coalition in Afghanistan said U.S. forces carried out an airstrike at 2:15 a.m. “against insurgents who were directly firing upon U.S. service members advising and assisting Afghan Security Forces.” The strike took place “in the vicinity of a Doctors Without Borders medical facility” in Kunduz, it said.

The U.S. military had previously said the hospital may have been “collateral damage.”

But Afghan police in Kunduz say a number of Taliban militants were hiding in the hospital compound when the strike happened.

Doctors Without Borders, which denies it lets combatants use its facilities for fighting, says such claims from Afghan officials imply the bombing of the hospital was intentional.

The aid group said it had provided the GPS coordinates of the hospital to the Afghan military and the U.S.-led coalition in Afghanistan days before the attack in an effort to avoid it being hit. No staff members reported any fighting inside the compound prior to the airstrike, it said.

The bombardment killed 13 staff members and at least 10 patients, three of them children, Doctors Without Borders said. Another 37 people were wounded.

All the dead and wounded were Afghans, the aid group said.

People caught up in the blaze set off by the bombing described terrifying scenes.

“There are no words for how terrible it was. In the intensive care unit, six patients were burning in their beds,” Lajos Zoltan Jecs, a nurse at the hospital, said in an account posted on the MSF website.

International staff members have since been evacuated to Kabul and critical patients sent to other facilities. “The MSF Afghan staff who were not killed are either being treated in health facilities in the region or have left the hospital,” the organization said.

U.S. President Barack Obama says the Pentagon is carrying out “a full investigation” and he expects “a full accounting of the facts and circumstances.”

Separately, the NATO-led coalition said it expected the results of a preliminary multinational investigation in the coming days.

But Doctors Without Borders has called for a completely independent inquiry.

“Under the clear presumption that a war crime has been committed, MSF demands that a full and transparent investigation into the event be conducted by an independent international body,” the organization said. “Relying only on an internal investigation by a party to the conflict would be wholly insufficient.”

Establishing whether the bombing constitutes a war crime, as MSF asserts, will require a detailed picture of what exactly happened — something that’s not available right now.

“You cannot, under the laws of war, attack sites such as hospitals, schools, religious buildings,” said Gregory Steven Gordon, an associate professor of law at the Chinese University of Hong Kong. “However, the hospital as a building can lose its immunity if it’s being used by the enemy for military attacks.”

Gordon, a war crimes prosecution expert, told CNN that investigators will need to find out “exactly what kind of attacks were being carried on in the hospital, if any.”

“The United States, even if attacks were being carried out from the hospital, would have to respect certain principles of precaution,” he said. “In other words, they would have to make sure they were using weapons that would be the least destructive, they would have to give warnings to civilians to get them out.”

The bombs left part of the MSF trauma hospital in flames and rubble.

“The main hospital building, where medical personnel were caring for patients, was repeatedly and very precisely hit during each aerial raid, while the rest of the compound was left mostly untouched,” said Christopher Stokes, the aid group’s general director.

The organization said it has since been forced to close the hospital.

“There is no access to trauma care now for the civilians and for the wounded in the whole area of Kunduz, which is some kind of battleground for the moment,” Stokes said.

The Taliban took over Kunduz last week, overrunning a major Afghan city for the first time since 2001. Afghan security forces, backed by the U.S.-led coalition, have been trying to drive the insurgents back out.

The city’s civilian residents have been caught in the heavy fighting.

MSF said it had treated 394 wounded people in Kunduz in less than a week. At the time of the bombing, 105 patients and their caretakers were in the hospital along with more than 80 Afghan and international staff members, it said.