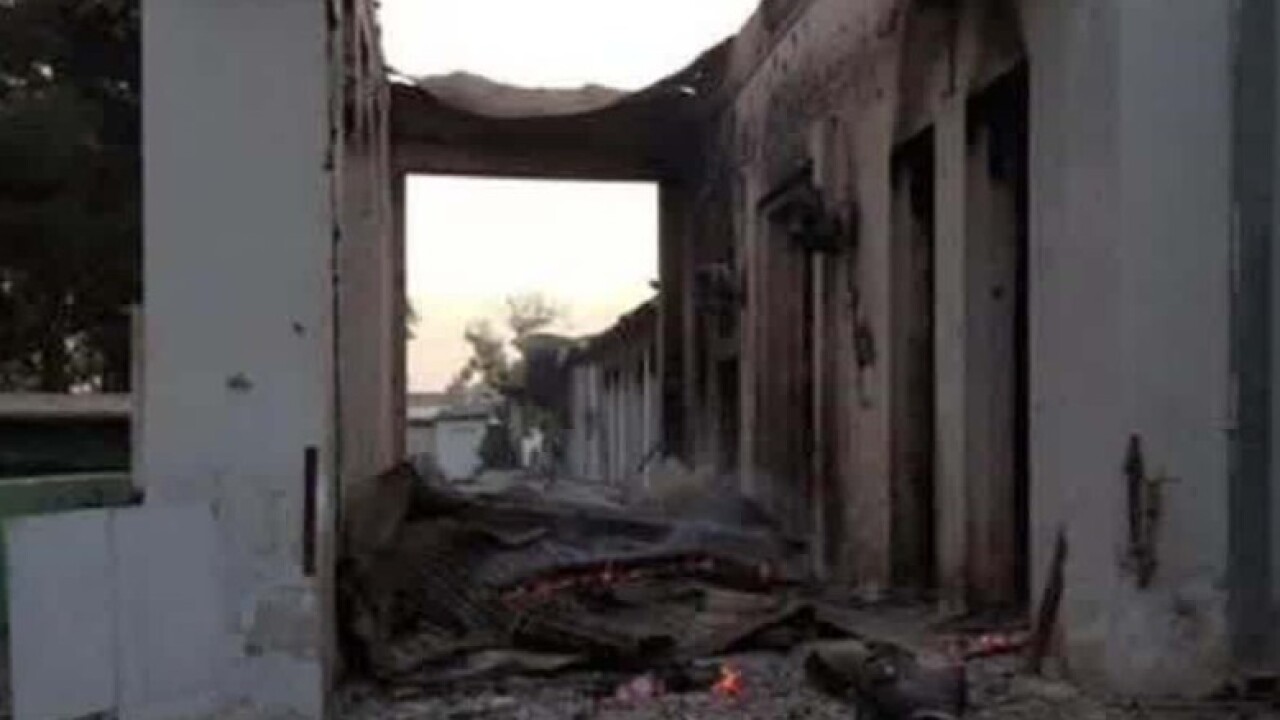 Doctors Without Borders is calling for an independent investigation of the deadly bombing of its hospital in the Afghan city of Kunduz, which it says is no longer operational.

The blasts left part of the hospital in flames and rubble, killing 12 staffers and seven patients — including three children — and injuring 37 other people, the charity said.

As the United States said it was investigating what struck the hospital during the night, the charity expressed shock and demanded answers, stressing that all combatants had been told long ago where the hospital was.

“(The bombing) constitutes a grave violation of international humanitarian law,” said Doctors Without Borders, which is known internationally as Medecins Sans Frontieres, or MSF.

The bombardments continued even after U.S. and Afghan military officials were notified the hospital was being attacked, the charity said.

The White House released a statement from President Barack Obama offering condolences to the charity from Americans.

“The Department of Defense has launched a full investigation, and we will await the results of that inquiry before making a definitive judgment as to the circumstances of this tragedy,” the President said. “I … expect a full accounting of the facts and circumstances.”

“We need an investigation that’s as independent and as transparent as possible, and we don’t only want the findings to be shared, we want — as well — to be able to read the full report,” he said.

“(T)he results of this investigation are I think important for us but also for the ability of humanitarian actors to continue working and provide lifesaving assistance in Afghanistan.”

The NATO mission in Afghanistan issued a statement saying it had directed a “preliminary multinational investigation known as a Casualty Assessment Team.”

“We anticipate having the results of this initial assessment in a matter of days. Additionally, the U.S. military has opened a formal investigation, headed by a General Officer, to conduct a thorough and comprehensive inquiry,” it said.

United Nations High Commissioner for Human Rights Zeid Ra’ad Al Hussein strongly condemned the attack and said that it was essential to ensure that any investigation of it is “independent, impartial, transparent and effective.”

“This deeply shocking event should be promptly, thoroughly and independently investigated and the results should be made public,” he said, according to a U.N. statement issued Saturday. “The seriousness of the incident is underlined by the fact that, if established as deliberate in a court of law, an airstrike on a hospital may amount to a war crime.”

Reporting from Kabul, CNN’s Nic Robertson said MSF’s real concern was one of impartiality, as well as transparency.

“The concern that Doctors Without Borders have at this time is that essentially at this stage, the U.S. is investigating something that the U.S. is possibly involved in,” he said.

Robertson said a representative of the police chief in Kunduz said that when the attacks happened, a number of Taliban were hiding in the hospital compound. But he said MSF believed there were no Taliban there with weapons.

“The Taliban themselves are saying that that night, there was fighting going on very close to the compound … and that their fighters went inside the compound to escape the fighting. The impression they’re giving is that they weren’t engaged in combat,” Robertson said.

Stokes earlier said that any wounded patients being treated by MSF could not legally be treated as targets.

“If somebody is wounded, they’re a noncombatant, and under international humanitarian law, they should be treated as such and they’re not legitimate targets,” he said.

Stokes said MSF had been forced to close the hospital since the attack. “There is no access to trauma care now for the civilians and for the wounded in the whole area of Kunduz, which is some kind of battleground for the moment.”

An Afghan Health Ministry spokesman later tweeted that surgical teams and medical supplies would soon be arriving in Kunduz by road and air.

The incident occurred on roughly the sixth day of fighting between Afghan government forces — supported by U.S. air power and military advisers — and the Taliban, which invaded the city early this week.

According to MSF, the compound is gated, and no staff members saw any fighters there or nearby.

“If there was a major military operation going on there, our staff would have noticed. And that wasn’t the case when the strikes occurred,” Stokes said.

The charity, which had had been caring for hundreds already hurt in days of fighting, said it had told all warring parties the exact location of the trauma center, including most recently on Tuesday.

It said that when the aerial attack occurred, 105 patients and their caretakers had been in the hospital. More than 80 MSF international and national staff were present.

One worker described seeing patients burning in their beds.

“We tried to take a look into one of the burning buildings. I cannot describe what was inside. There are no words for how terrible it was. In the (intensive care unit), six patients were burning in their beds,” nurse Lajos Zoltan Jecs said.

U.S. Army Col. Brian Tibus said the U.S. military had been conducting an airstrike in Kunduz at the time the hospital was hit.

Tibus said a “manned, fixed-wing aircraft” conducted a strike “against individuals threatening the force” at 2:15 a.m. local time, and the strike “may have resulted in collateral damage to a nearby medical facility.”

Speaking on condition of anonymity, a U.S. military official said the Pentagon is investigating whether a U.S. AC-130 gunship — which was firing on Taliban positions to defend U.S. special operations troops advising Afghan forces — is responsible. The official stressed that the information about the probe was preliminary.

Earlier this week, the Taliban captured Kunduz in the group’s biggest victory in 15 years.

Afghanistan said it reclaimed most of the city Thursday in a big operation backed by U.S. airstrikes.

But hours later, there were signs that the Taliban were back in Kunduz, a resident told CNN.

Kunduz is a strategic hub on the main highway between Kabul and Tajikistan, and its incursion was a major setback for Afghan forces.