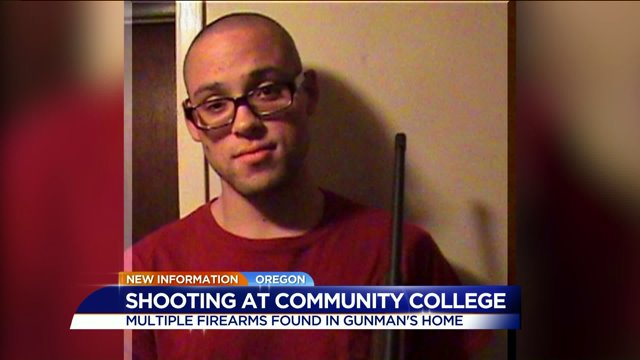 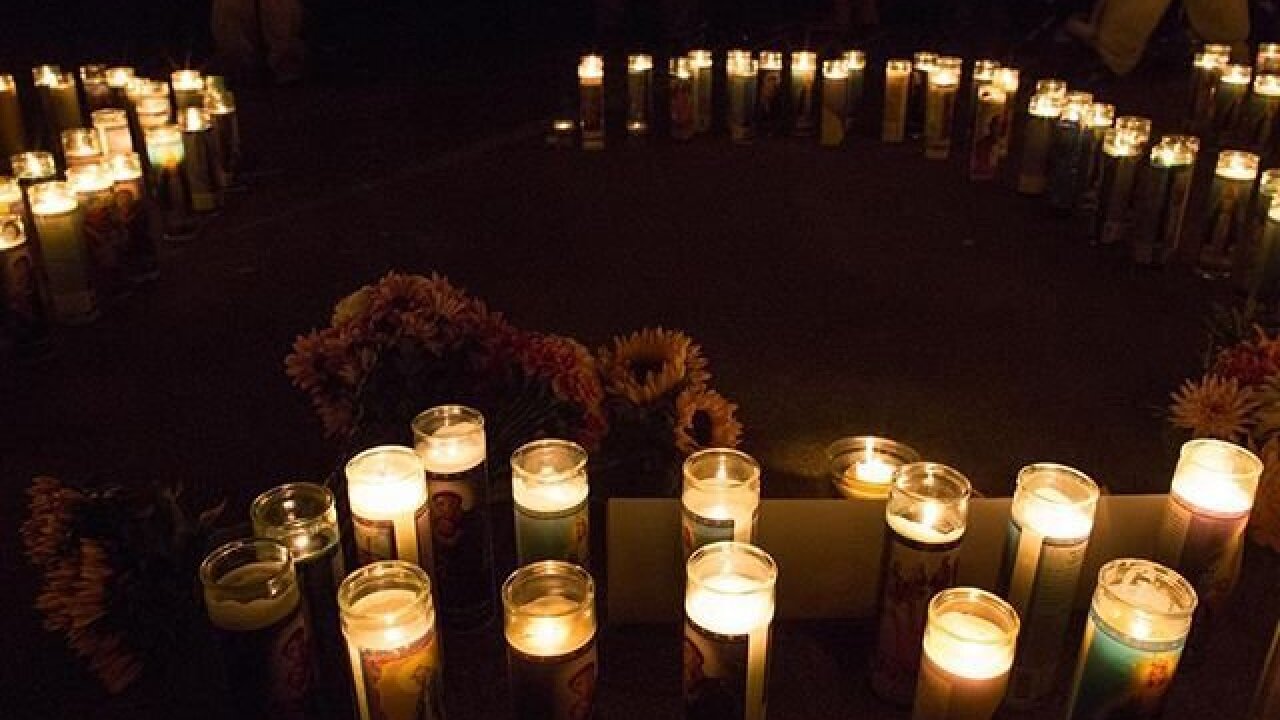 Six weapons were found at the college, where the shooter died Thursday after a gun battle with police, she said. Those weapons included five pistols and one rifle.

All the guns were legal, obtained by the shooter or family members over the last three years.

A flak jacket was found next to a rifle at the school with five magazines of ammunition, she said, and additional ammunition was found at the residence.

Authorities are still not providing a motive for America's latest mass killing, which also left nine people wounded. They also haven't named any of the victims or the shooter. The gunman went to the college in rural south Oregon heavily armed and wearing body armor on Thursday morning and shot people in two buildings, authorities said.

Sen. Jeff Merkley of Oregon said one of his cousins was killed at the school. "This is a small town and everyone is affected," he said.

Stacy Boylan, the father of shooting victim Anastasia Boylan, said she told him the gunman singled out Christians.

She said the gunman entered her classroom firing, told the professor teaching the class, "I've been waiting to do this for years," and shot him point blank, Stacy Boylan said.

While reloading his handgun, the man ordered the students to stand up and asked if they were Christians, Boylan told her family.

"And they would stand up, and he said, 'Good, because you're a Christian, you're going to see God in just about one second,' " Stacy Boylan, told CNN, relaying his daughter's account. "And then he shot and killed them."

Anastasia Boylan, 18, was hit in the back by a bullet that traveled down her spine. While she lay bleeding on the floor, the gunman called out to her, "Hey you, blond woman," her mother said. She played dead -- and survived.

Another intriguing element in the investigation: The shooter is reported to have delivered "a box" to someone during the shooting.

Stacy Boylan said his daughter told him the man "gave somebody a box, somebody who lived, and said, 'You gotta deliver this.' Somebody has a box. I don't know what that's about."

Law enforcement officials familiar with the investigation told CNN that the gunman handed his writings to a survivor, telling that person to give it to police, but the sources could not confirm the writings were inside the box.

Investigators said the writing portrayed the shooter as a student of past mass shootings. The gunman identified with the perpetrators of those rampages, the sources said -- including Elliot Rodger who killed six people in Santa Barbara, California, in 2014. The Oregon shooter expressed frustration that other mass killers did not take on police and vowed he would kill police along with others, law enforcement officials said.

Speaking Friday morning on CNN's "New Day," Douglas County Sheriff John Hanlin said he had not heard anything about the gunman asking victims about their religion.

Hanlin reiterated that he will not officially identify the gunman, leaving that task to the state medical examiner's office.

Rita Cavin, interim president of the school, said Mercer was not believed to be a current student, but some students said they took courses with him.

"He was a little odd, like sensitive to things," said Rebecca Miles, who took a theater class with Mercer.

Throughout Thursday night, investigators talked to the gunman's family and neighbors to try to piece together the puzzle.

"Obviously it's been a devastating day," Mercer's father, Ian, told reporters outside his house in Tarzana, California. "Devastating for me and my family."

Mercer served in the army from 2008 from November 5 to December 11 at Fort Jackson, South Carolina, but was "discharged for failing to meet the minimum administrative standards," the Pentagon said in a news release. A military official said Harper-Mercer never made it out of basic training.

He also attended El Camino College from 2010 to 2012, according to a college spokesman.

Steven Fisher, who lived near Mercer, described him as "skittish."

"His demeanor, the way he moved, always looking around," Fisher said. "I got a bad vibe from him."

One avenue investigators were pursuing are blog posts on a website left by someone with an email address associated with Mercer.

The writings include ramblings about his racial animus toward black people and general feelings of anger about being isolated and unable to make relationships, law enforcement officials briefed on the investigation told CNN.

Two officials said that after the shooting, the gunman's family told investigators that he suffered from mental health issues and had sought treatment.

But investigators so far have found no indication he was linked with any organized groups.

The posts were left under the username lithium_love. Two of them were specifically about recent shootings: one about Vester Flanagan, who killed two local news reporters in Virginia, and one about the officer slain near Houston in August.

Speaking of Flanagan on August 31, the blog post reads: "I have noticed that so many people like him are all alone and unknown, yet when they spill a little blood, the whole world knows who they are. A man who was known by no one, is now known by everyone. His face splashed across every screen, his name across the lips of every person on the planet, all in the course of one day. Seems the more people you kill, the more you're in the limelight."

The father of TV reporter Alison Parker, who was killed in the Virginia shooting, has written an opinion story in USA Today saying the United States is at war and calling for gun restrictions.

All those people had gunshot wounds to the head, abdomen and limbs, Dr. Jason Gray, the hospital's chief medical officer, said Friday morning at a news conference.

Three people with gunshot wounds to the head were transferred to PeaceHealth Sacred Heart Medical Center in Springfield, he said. One of those patients is in critical condition and two are in serious condition, Nickel said. CNN medical correspondent Sanjay Gupta said those three patients were women between the ages of 18 and 34.

Four patients underwent surgery at Mercy Medical, Gray said. One is in critical condition and two are in fair to good condition, he said. One surgery patient was discharged, he said.

On Thursday, two wounded people were treated in the emergency room and released, he said.

'I knew exactly what had just happened'

The shooting appears to have started in one building, before the gunman moved to another building. Those killed and wounded were found in at least two classrooms. Calvin, the college's interim president, said the gunman initially opened fire in an English class.

It's unclear whether the gunman was shot by police or committed suicide.

Student Cassandra Welding said that when the shots rang out, the students in her class dropped to the ground -- huddling behind backpacks and chairs, or underneath tables.

"We locked the doors, turned off the lights, and we were all pretty much in panic mode," she said.

"We called 911 and called our parents, our loved ones. ... We didn't know what was going to happen, if those were our last words or not."

The picturesque campus sits on a hill in a logging community, which is fairly rural but easily accessible from Interstate 5.

The town has little crime. From 2009 to 2012, the area reported no sex offenses, assaults, liquor law violations, weapons possessions or hate crimes.

A visibly upset President Barack Obama, delivering the 15th statement of his presidency addressing gun violence, said these incidents are becoming all too regular.

"Somehow this has become routine," he said. "The reporting is routine. My response here at this podium ends up being routine, the conversation in the aftermath of it. We've become numb to this," he said.

Alek Skarlatos, the Oregon national guardsman recognized for helping to stop an armed terrorist aboard a train in France, told CNN affiliate KATU that he was a student at the school and would have been attending this semester if he hadn't agreed to appear on "Dancing with the Stars."

"It breaks my heart something like this would happen in Roseburg of all places," he said. "This community is so small that everybody will know somebody hurt or killed in this attack."