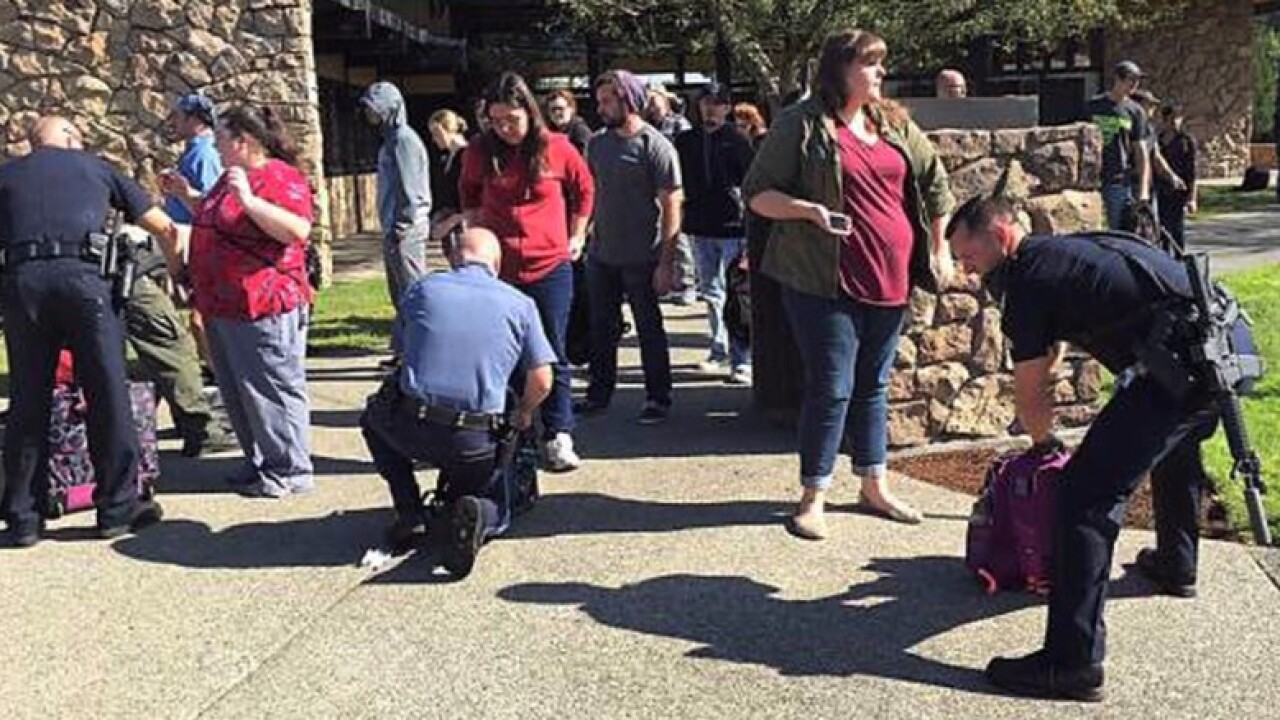 The gunman who opened fire at Oregon’s Umpqua Community College targeted Christians specifically, according to the father of a wounded student.

Before going into spinal surgery, Anastasia Boylan told her father and brother the gunman entered her classroom firing. The professor in the classroom was shot point blank. Others were hit, she told her family.

Everyone in the classroom dropped to the ground.

The gunman, while reloading his handgun, ordered the students to stand up if they were Christians, Boylan told her family.

“And they would stand up and he said, ‘Good, because you’re a Christian, you’re going to see God in just about one second,'” Boylan’s father, Stacy, told CNN, relaying her account.

Ten people were killed when a gunman opened fire at Oregon’s Umpqua Community College on Thursday, forcing the nation to face yet another mass shooting.

Seven other people were injured, and the shooter is dead, Douglas County Sheriff John Hanlin told reporters. Earlier estimates had put the number of people hurt much higher.

Multiple law enforcement officials familiar with the investigation identified the gunman as 26-year-old Chris Harper Mercer. Investigators have interviewed members of his family and friends, they said.

Cassandra Welding is a student at the Roseburg campus and was in class when the shooting started.

“I heard a popping noise, almost like a balloon popping,” she told CNN’s Wolf Blitzer. “I knew something wasn’t right and so I get down.”

She said all of the students in her classroom dropped to the ground. They huddled together behind backpacks and chairs, underneath tables.

“We locked the doors, turned off the lights, and we were all pretty much in panic mode,” Welding said.

“We called 911 and called our parents, our loved ones … We didn’t know what was going to happen, if those were our last words or not.”

The shooting appears to have started in one building before the gunman moved to the school’s science building, a source with knowledge of the investigation told CNN. Those killed and wounded were found in at least two classrooms.

“We arrived to find multiple patients in multiple classrooms. Law enforcement was on scene and had the shooter neutralized,” said Douglas County Fire Marshal Ray Shoufler.

He told CNN that two patients died while being transported to a hospital.

Mercy Medical Center posted on Facebook that it had received 10 patients. The extent of their injuries was not known.

Three female victims were at PeaceHealth Sacred Heart Medical Center at RiverBend in Springfield, according to a hospital spokeswoman.

It wasn’t immediately clear why the hospitals’ numbers conflicted with the figure provided by Sheriff Hanlin.

A law enforcement official told CNN three pistols and one rifle believed to have belonged to the suspect were recovered at the scene.

Authorities were “responding to reports of an active shooter” Thursday morning at the campus of Umpqua Community College in Roseburg, Oregon, a sheriff’s spokesman said.

The school itself is up on a hill outside the city center, according to Rick Francona, a CNN military analyst who lives nearby. Francona said that logging is a big industry in the region, which is fairly rural but easily accessible from Interstate 5.

“This is so out of character for this whole area,” he said.

News of the shooting quickly reached Washington, with the state’s senior senator, Ron Wyden, visibly shaken and Sen. Jeff Merkley tweeting that he was praying for the victims and their families.

U.S. President Barack Obama was briefed on the situation and will continue to receive updates throughout the day.

He pushed for a change in gun laws when he spoke to reporters about the shooting Thursday.

“Somehow this has become routine. The reporting is routine. My response here at this podium ends up being routine, the conversation in the aftermath of it. We’ve become numb to this,” he said.

The President continued: “Our thoughts and prayers are not enough. It’s not enough. It does not capture the heartache and grief and anger that we should feel, and it does nothing to prevent this carnage from being inflicted someplace else in America — next week, or a couple months from now.”

A picturesque campus in the North Umpqua River Valley, Umpqua Community College prides itself on a “a peaceful, safe atmosphere, and year-round recreational activities,” according to its website.

It first began teaching classes out of rented facilities in 1961. Elton and Ruth Jackson donated 98.5 acres to house the campus in 1965.

The school will be closed until Monday as a result of the shooting.

The interim leader of Umpqua Community College called Thursday “the saddest day in the history of the college.”

Are you there? Share your images if you can safely.