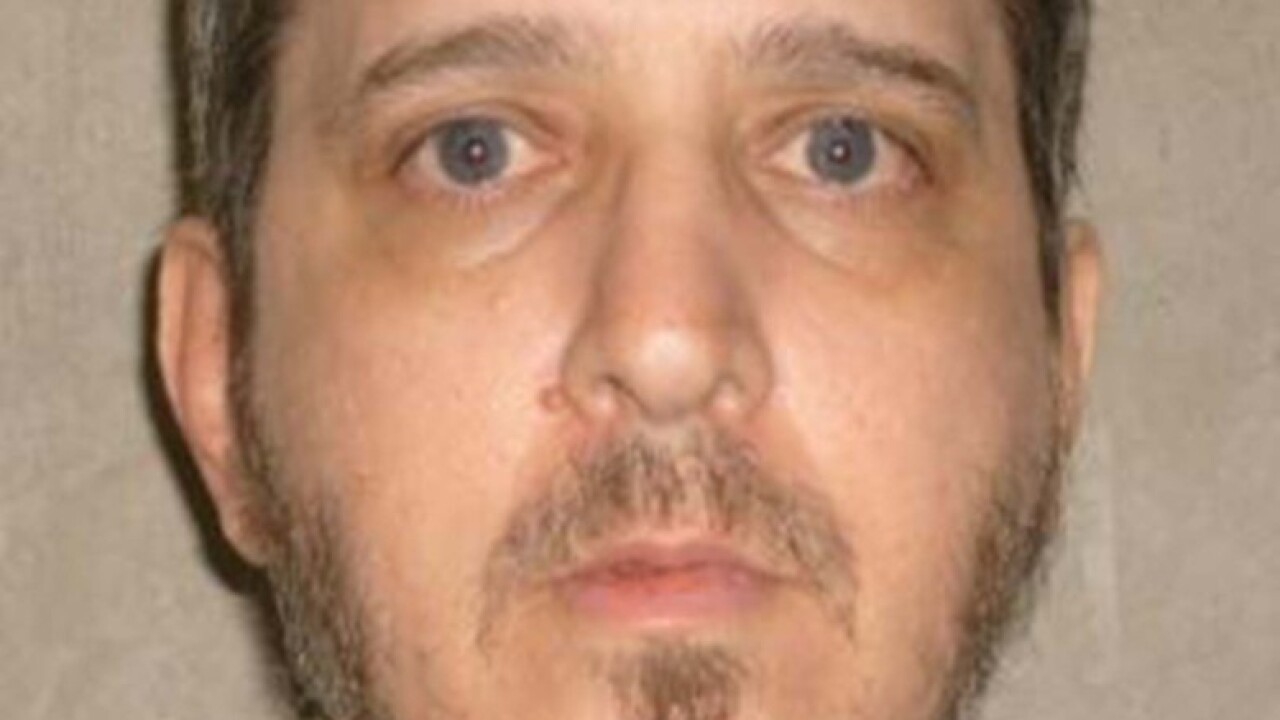 The new execution date is set for November 6.

Glossip had been scheduled to die earlier Wednesday. He would have been the first person executed with a controversial sedative since the U.S. Supreme Court greenlighted its use this summer.

“Last-minute questions were raised today about Oklahoma’s execution protocol and the chemicals used for lethal injection,” Fallin said in a statement. “After consulting with the attorney general and the Department of Corrections, I have issued a 37-day stay of execution while the state addresses those questions and ensures it is complying fully with the protocols approved by federal courts.”

Glossip was convicted in the murder of Barry Van Treese, whose killer, Justin Sneed, testified that Glossip hired him to beat the motel owner to death with a baseball bat in 1997.

The governor issued the stay despite her previous position that stopping the execution was out of her hands and up to the courts.

She issued a statement Monday saying that her state had gone to “extraordinary lengths” to treat Glossip fairly, affording him multiple trials, 17 years of appeals and three stays. The decision is out of her hands, she said.

“Over and over again, courts have rejected his arguments and the information he has presented to support them,” she wrote. “If a state or federal court grants Glossip a new trial or decides to delay his execution, I will respect that decision. If that does not happen, his execution will go forward on September 30.”

Pope Francis, who asked Georgia to spare the life of Kelly Gissendaner (it did not; she was executed Tuesday), asked Archbishop Carlo Maria Vigano to press Fallin to stop Glossip’s execution.

Fallin’s communications director, Alex Weintz, replied: “Governor Fallin has received a letter from Archbishop Carlo Maria Vigano, writing on behalf of Pope Francis. The letter asks the governor to commute Richard Glossip’s death sentence. To be clear, Governor Fallin does not have the legal authority to do that.”

Glossip was sentenced to death in 2004 and was scheduled to receive a three-drug execution cocktail at 3 p.m. Wednesday at the Oklahoma State Penitentiary in McAlester.

One-third of that cocktail is a powerful sedative, often used for anesthesia, called midazolam. It’s meant to cause unconsciousness, but opponents say it doesn’t induce the deep unconsciousness necessary to prevent prisoners from experiencing the painful effects of the two other drugs in the protocol.

The drug made headlines in April 2014 when convicted murderer Clayton Lockett writhed and moaned on a gurney for 43 minutes before dying. Though the execution was widely labeled botched, a state investigation said the insertion of intravenous lines — not the drugs — was responsible for problems with the execution.

It was the first time Oklahoma had used midazolam in its execution cocktail, but opponents of its use say it’s not the only time an execution employing midazolam went awry.

Only Alabama, Arizona, Florida, Louisiana, Oklahoma and Virginia consider midazolam an option for executions. Ohio dropped its use of the drug in January. Kentucky dropped midazolam last year without ever having used it.

Charles Warner, another Oklahoma death row inmate who was scheduled to die the same day as Lockett, initially saw his April 2014 execution stayed by the state. A lawyer for the convicted child rapist and murderer urged the U.S. Supreme Court to review the state’s lethal injection policies, but the high court declined and Warner was executed using a cocktail including midazolam in January.

Thirteen days later, the U.S. Supreme Court issued a one-sentence order staying three Oklahoma “executions using midazolam,” agreeing to hear arguments about the use of the drug. Glossip’s was one of the executions postponed.

To the high court it went

In a testy May hearing, the high court heard arguments from both sides, and two of the conservative justices, Antonin Scalia and Samuel Alito, expressed concerns that death penalty opponents had fought to make the most effective drugs unavailable. (European manufacturers several years ago began banning U.S. prisons from using their drugs, such as sodium thiopental and pentobarbital, in executions.)

Oklahoma Solicitor General Patrick Wyrick argued that the state had improved its protocol since the Lockett execution and noted that a lower court had found that a 500-milligram dose of midazolam would “with near certainty, render these petitioners unconscious and unable to feel pain.” Lockett had received 100 milligrams.

In a 5-4 June decision, with Anthony Kennedy joining the conservative justices, the Supreme Court approved the drug’s use for future executions.

“The prisoners failed to identify a known and available alternative method of execution that entails a lesser risk of pain, a requirement of all Eighth Amendment method-of-execution claims,” Alito wrote. “Second, the District Court did not establish that Oklahoma’s use of a massive dose of midazolam in its execution protocol entails a substantial risk of severe pain.”

Though Glossip has expressed concerns about dying via a midazolam cocktail — he told CNN earlier this year, “I am worried they will botch it again” — the 52-year-old also argues that he’s innocent.

Following the Supreme Court ruling on midazolam, he was scheduled to die earlier this month, but the Oklahoma Court of Criminal Appeals postponed the execution until Wednesday after his attorney filed several motions.

One motion requested an evidentiary hearing, saying that new evidence had emerged showing that police interrogated Sneed in such a way as to produce false statements, that Sneed had bragged about setting up Glossip, and that Sneed was a methamphetamine addict. Glossip’s attorneys also said there was insufficient evidence to convict him in the first place.

The appellate court denied Glossip post-conviction relief Monday, and his lawyers sent their appeal to the U.S. Supreme Court, which ruled minutes before his scheduled execution that it had denied his request for a stay. The court did not mention a vote in its denial but said, “Justice (Stephen) Breyer would grant the application for stay of execution.”

Appeals for leniency did not resonate with the victim’s family. Speaking at a clemency hearing for Glossip last year, the victim’s brother, Kenneth Van Treese, said he had no sympathy for the inmate.

“I will speak for my brother,” he said. “It hurts like hell to have your head bashed in with a baseball bat. Do not feel sorry for the bastard who took my life.”