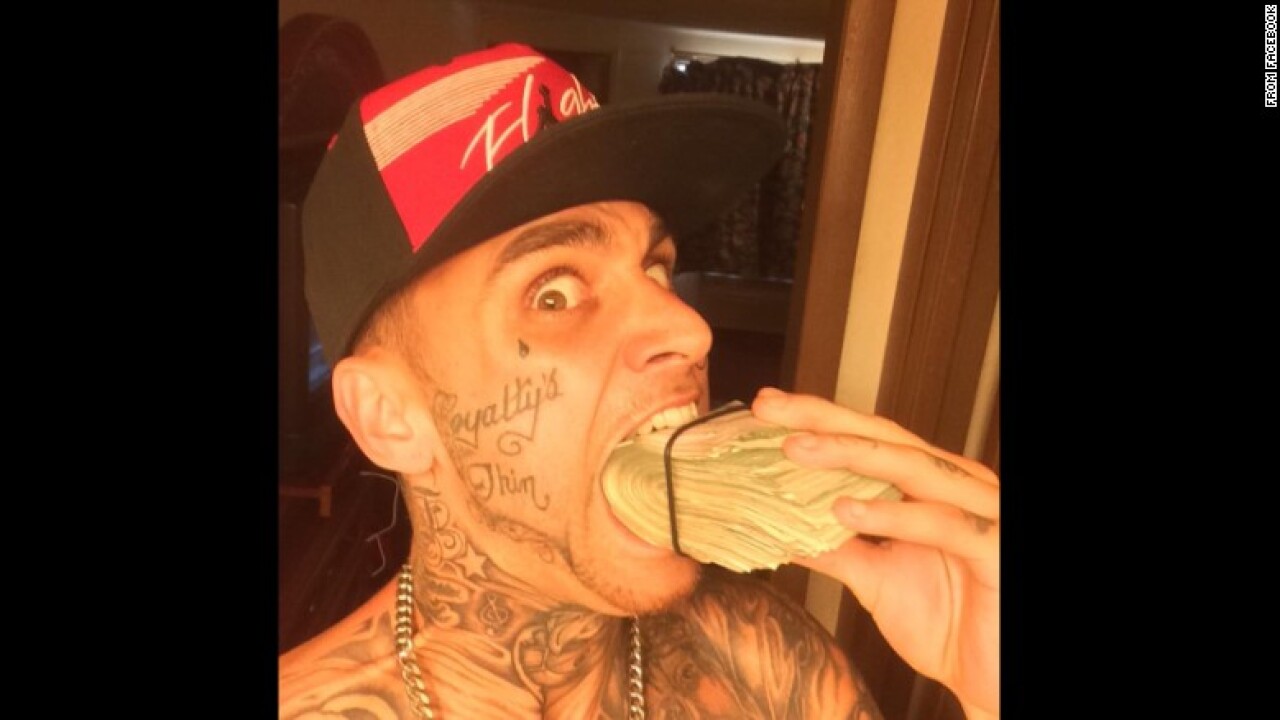 A photo posted to Facebook shows a man — later accused in an Ohio bank robbery — playfully chomping on a huge wad of cash. (Facebook)

ASHVILLE, Ohio — When isn’t it a good idea to post pictures online pretending a wad of cash is a telephone, playfully eating a chunk of bills or grinning from ear-to-ear holding sums of money in both hands?

When you’ve allegedly robbed a bank.

That’s what authorities in Ashville, Ohio, claim John E. Mogan II did last month, before possibly giving himself away a few weeks later with his Facebook posts.

Mogan, 28, and his girlfriend Ashley Duboe, 24, both face felony charges of third degree robbery and fifth degree theft, the sheriff’s office and Ashville police department said in a press release.

The two were in custody Tuesday on $250,000 bonds and lawyers haven’t been identified for them yet, Circleville Municipal Court official Molly Tootle said. Thus, neither could be reached for comment on allegations.

Their trip into custody began shortly after 8:45 a.m. on August 24, when Mogan allegedly walked into a branch of The Savings Bank in Ashville, a community of about 4,000 people some 20 miles south of Columbus.

This was just over a month after Mogan got out of jail on another bank robbery charge, said Parish, who noted that the suspect had been imprisoned five times.

This time, Mogan allegedly handed a note to the bank teller, who then handed him cash. The suspect then took off on foot.

Exactly who was the bank robber? Where did he go? And what did he do with the money?

Some potential clues emerged on Mogan and Duboe’s joint Facebook account in the first week of September.

All of them feature Mogan, who sports a bevy of tattoos including “Loyalty’s Thin” on one cheek and “Betrayal’s Thick” on the other, and big chunks of cash.

It’s in his mouth in two images and held up to his ear, like a telephone, in another. A different picture shows Duboe hugging a smiling Mogan, who is holding money in both hands.

Did all that cash come from The Savings Bank? It’s impossible to tell from the images. But, Parish said that it’s suspicious given Mogan’s past and then-reality that he didn’t have a job.

“His lack of fruitful employment at the time wouldn’t generate money to that extent,” the sheriff’s lieutenant said.

Moreover, authorities were already inundated by a “deluge of tips” after releasing images of the August robbery. After looking into those, they identified Mogan as a suspect — and only then found the Facebook pictures.

Authorities believe they have the two people, who were arrested and arraigned on September 21, behind The Savings Bank robbery.

But, according to Parish, they have not recovered any of the stolen money yet.