EDMONTON — This webslinger got to live out a childhood fantasy.

Six-year-old Mable (last name not given) has leukemia, and, just like “Batkid” in 2013, had one wish she wanted fulfilled: to be a superhero for a day.

The Children’s Wish Foundation and the city of Edmonton, Alberta, dedicated an entire day to “Spider-Mable” (or #spidermable)

When “Spider-Mable” learned on a “newscast” that Edmonton Oilers captain had been kidnapped, she swung into action. 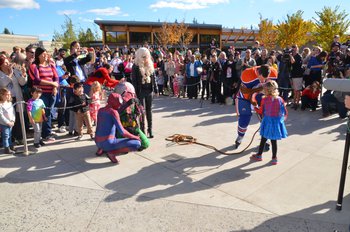 Edmonton’s premier Rachel Notley got in on it, as well as the Edmonton Police.

She met with the mayor and other officials to solve the crime, and her Spider sense led her to the zoo.

It was all in a day’s work for Spider-Mable, true believers.

And there may be hope yet for a female “Spider” hero to hit the big screen, as this video imagining the new popular Marvel character Spider-Gwen went viral on the same day.