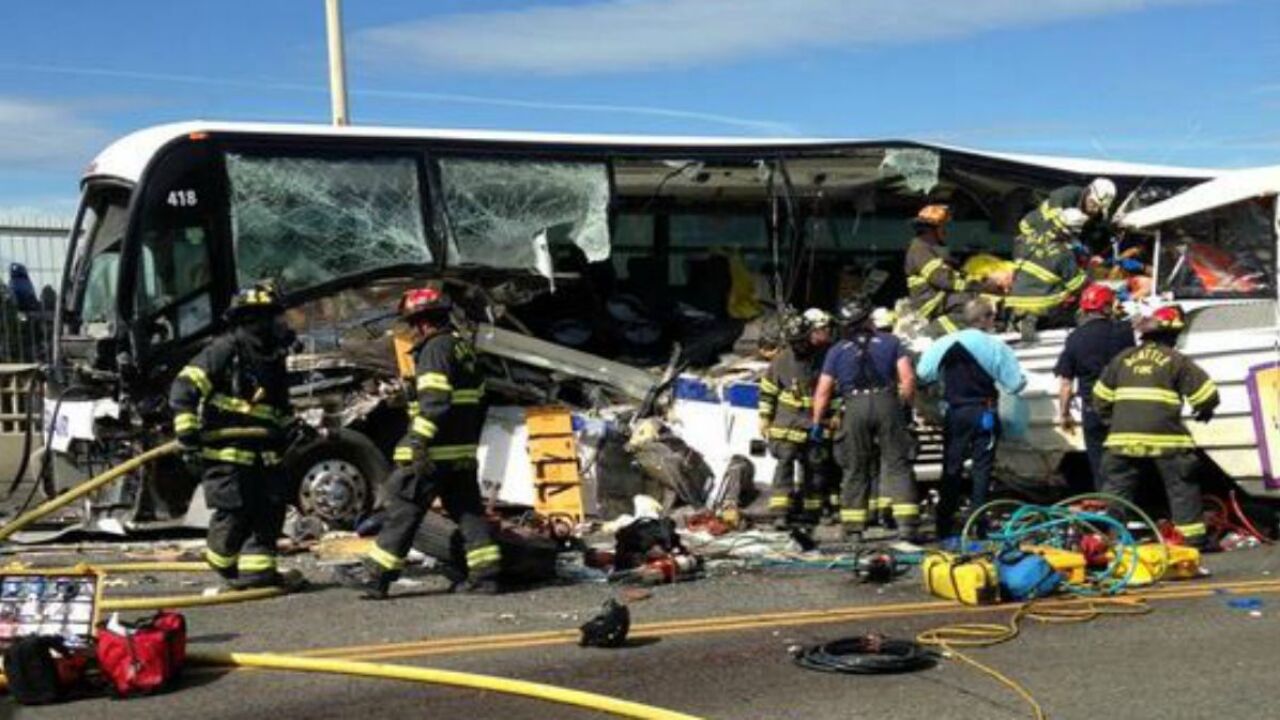 Four people were killed and at least 12 were critically injured when a tour bus and a duck boat tourist vehicle collided Thursday morning in Seattle, city fire officials said.

Fire Chief Harold Scoggins told reporters that the number of dead had risen from two to four and 44 others were hospitalized.

At least 12 of those patients were injured critically, Lt. Sue Stangl with the Seattle Fire Department said.

Tourists on-board the ‘Ride the Ducks’ vehicle could been seen crawling out of the wreckage, KCPQ reported. At least 50 people were evaluated from the two vehicles involved in the crash, the Seattle Fire Department said.

Some people were treated at the site of the crash, which involved four vehicles, on State Route 99, officials said.

Harborview Medical Center took 14 patients — 12 in critical condition, one in serious condition and one in satisfactory condition — spokeswoman Susan Gregg said. Thirty patients were transferred to other hospitals.

The statement said the duck boat and a bus from Bellair Charters were involved in the accident.

Seattle police tweeted that Aurora Bridge between downtown Seattle and the Fremont neighborhood was closed in both directions to pedestrian and vehicle traffic.

Photos from the scene showed the wrecked vehicles being surrounded by scores of firefighters with about 90 first responders rushing to the scene, Stangl said.

It is unclear why the duck boat — a street vehicle that can double as a boat — hit the bus, Stangl told reporters.

In November 1998, a commuter bus plunged off the busy bridge after its driver was shot and thrown from the vehicle, then Seattle police spokeswoman Christie-Lynne Bonner said.

The vehicle, which consisted of two bus carriers connected in the middle with accordion-like flexibility to help in turns, plunged 50 feet, hit an apartment building’s roof in the Fremont neighborhood and ended up upright, albeit split in two.

At least three people died in that incident, while many more were hospitalized.

Duck tours — a popular option for tourists in many cities around the United States, in which people catch the sights rolling on roads or floating on waterways — have been in accidents before.

On July 2010, two Hungarian students on a duck boat in Philadelphia’s Delaware River died and at least 20 more were injuries when a sludge barge towed by a tugboat plowed into the disabled, 33-foot “Ride the Ducks” vessel. That amphibious boat, along with its 35 passengers and two crew members, were then forced into the water.

Earlier this year, a Rides the Ducks boat in Philadelphia was involved in a deadly accident with a pedestrian.