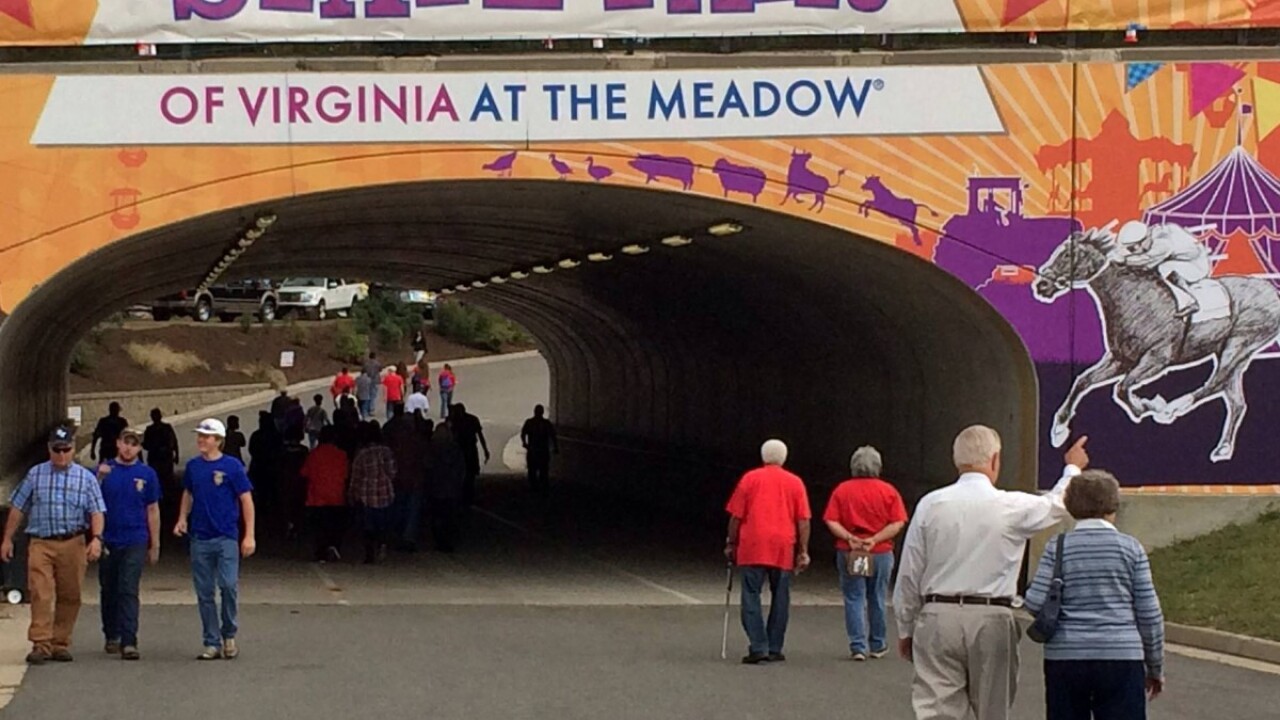 The State Fair of Virginia returns this year, Sept. 25-Oct. 4 and includes all-time favorites as well as new attractions, shows and extreme fair food (scroll down). Get ready for a rollicking, deep-fried good time.

Tickets are available at most Walgreen’s stores, online at StatrFairVa.org or at the gate. For complete ticket information, click here.

Season Pass costs $30 at the gate. Season Pass is non-transferable. Be prepared to show photo ID.

Parking at The Meadow Event Park is free.

Rides open one hour after gates open in the morning but will continue to operate for a minimum of one hour after the Ticket Plaza closes. Full list of 2015 rides, and height requirements are here.

You can plan on all types of activities. The State Fair of Virginia’s has a handy mobile app so you can log-in and sync your favorites to your phone or calendar. Activities can easily be sorted and saved.

This way you know exactly when the Virginia Raptors are on display or the Rusty Beaver Brewery Demonstration is going down, and how to not miss an opportunity to milk a dairy cow.

New food additions this year include homemade pork rinds by Sparky’s Crunchie Pig, deep-fried butter and bacon from Ristick Concessions and Coco Bongos’ frozen drinks served in coconut shells. There will be a maple theme:  maple cotton candy, maple jerky and maple lemonade by — believe it or not — Simply Maple.

Most food vendors will be located along the fair’s Festival Loop area, just outside the Farm Bureau Center exhibition hall. You can also count on fried catfish, fried chicken,  pizza on a stick, pasta dinners, barbecue, rib-eye sandwiches, roasted corn on the cob, boiled peanuts and fresh-squeezed lemonade.

Brunswick Stew lovers will have an opportunity to taste award-winning stew on Saturday, Sept. 26.  Stew from the fair’s annual Brunswick Stew Competition will go on sale at 11 a.m., and winners will be announced at 1 p.m.

For fairgoers with a sweet tooth, there is chocolate-covered cheesecake on a stick, deep-fried Twinkies and Ho Hos, Dippin’ Dots ice cream, frozen bananas dipped in chocolate and rolled in Reese’s pieces, chocolate-covered strawberries, elephant ears, kettle corn and more.

Plenty of other craft-brewed beers from Virginia will be available all ten days this year, having expanded from 2013.

Beers from eight other regional craft breweries, as well as Virginia-made cider and traditional beers, will be for sale.  New to the fair for 2015 are beers from Richmond’s Ardent Craft Ales and Old Bust Head Brewing Co. in Warrenton.

Nothing compares to the pride of winning a blue ribbon at the State Fair of Virginia. From animals, agriculture and equestrian sports, to crops, baked goods and crafts, there will be plenty of competitions.