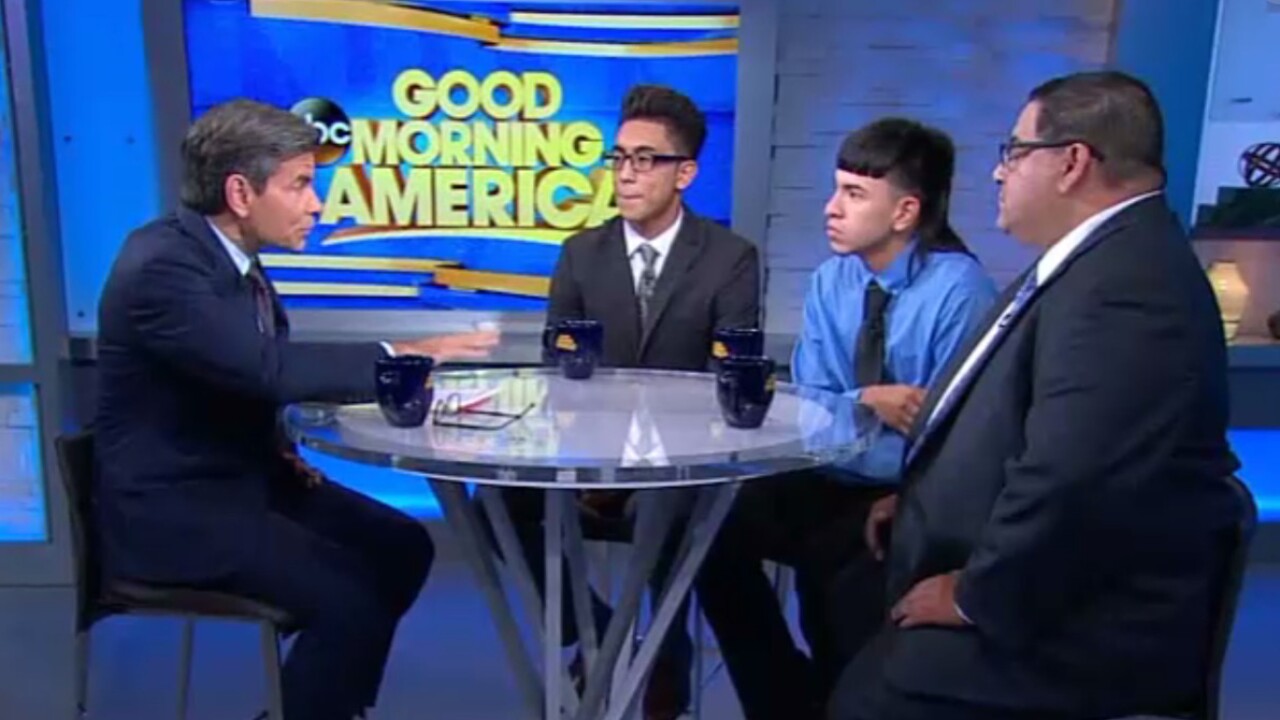 SAN ANTONIO — Two Texas high school football players, who intentionally hit an official during a game earlier this month and were suspended from school, attended a disciplinary hearing Wednesday.

Pascual Gonzalez, a spokesman for the Northside Independent School District in San Antonio, said that because Michael Moreno and Victor Rojas are minors, no information about the hearing would be released.

The boys’ lawyer said they spoke at the hearing and took responsibility for what they did.

“They understand that they had a choice, they made a choice, it was the wrong choice, and they’re just looking for fairness,” attorney Jesse Hernandez said. “The boys are in fact are good kids.”

Hernandez said he presented academic and disciplinary records as evidence.

Neither boy spoke to the media.

“I would apologize for the mistake that I made,” Rojas said when asked what he would say to game official Robert Watts if they met again.

Moreno said that he’s ready to face the consequences and calls the incident one of his biggest regrets.

“I just ask that I am greatly sorry for this, and I regret it greatly,” Moreno said. “And I just hope that people can change their minds about us.”

The teens were suspended from school for three days. They have been attending an alternative school since then.

A photograph show a Texas high school football referee after being struck by two John Jay High School players near San Antonio Friday, 4, 2015. The players were ejected and suspended, and Marble Falls police investigated the incident. The official is shown in this photograph in the umpire uniform marked with “U” and not wearing the black uniform ball cap.

Admission — with a caveat

Their intentions on the now-viral video were clear: The two John Jay players targeted a game official.

First, Rojas came from behind and tackled Watts to the ground. Moreno then dived in headfirst — leading with his helmet — and hit Watts again.

Moreno and Rojas were ejected from the September 4 game against host Marble Falls High. No criminal charges have been filed, but Marble Falls, Texas, police said they are investigating.

The players told ABC they were following orders.

Referring to assistant coach Mack Breed, Moreno said, “While on the sideline, he pulled me and another player over and he told us, and I quote, ‘You need to hit him.’ ”

Moreno added that Breed said, “You need to hit the ref. He needs to pay the price.”

The other player wasn’t involved and ultimately didn’t go through with the alleged plan. Rojas said a player told him about the situation.

Breed is on paid administrative leave. The Northside Independent School District said the allegations against Breed are still under investigation. CNN has reached out to Breed for comment but has not heard back.

The reason Watts was targeted, Moreno said, was because of unjustified calls as well as “racial slurs being thrown at players” purportedly by the referee. Rojas said he heard Watts tell one of his Hispanic friends “to speak English, this is America.” Rojas and Moreno both allege they heard Watts call an African-American teammate the n-word.

Watts has denied saying these things and is considering legal action against the players.

“We’ve heard these allegations before, blaming the victim for the crime,” Watts’ attorney, Alan Goldberger, said on September 9. “That doesn’t have any credibility, and (Watts) is not happy about being falsely accused.”

Goldberger told CNN on Friday said it was clear that Watts did not make racial slurs.