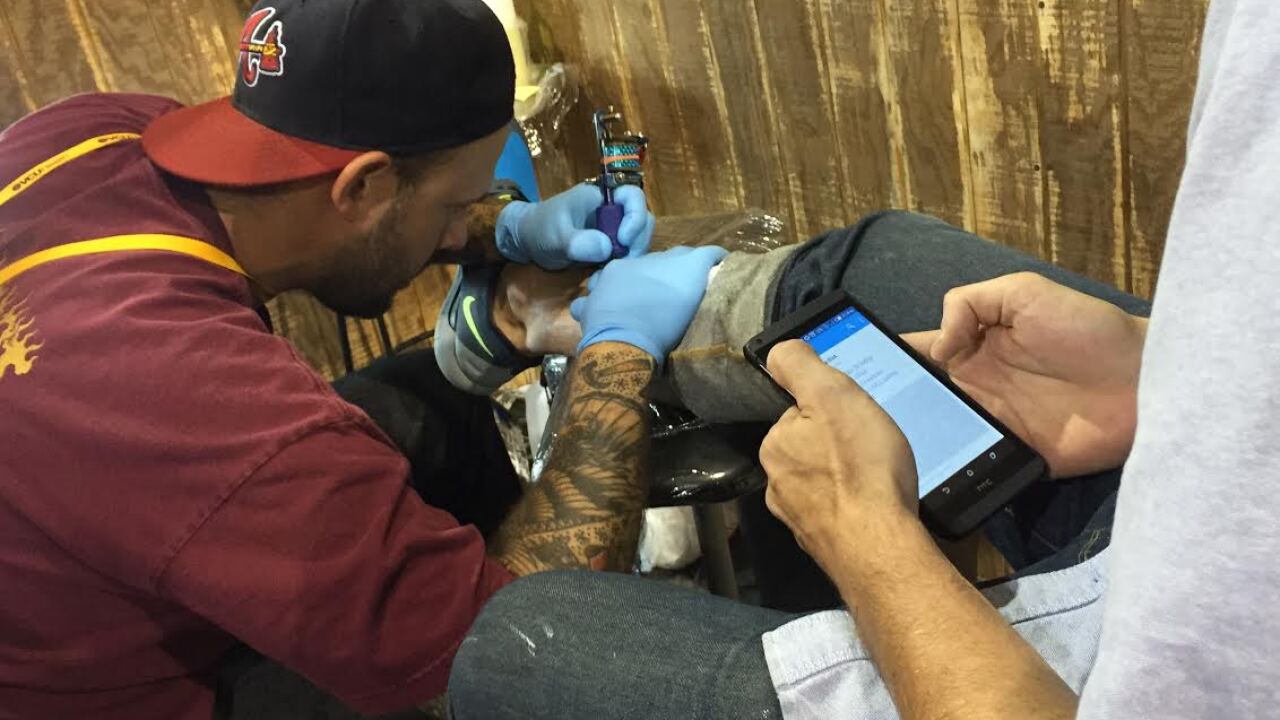 RICHMOND, Va. – On Wednesday, things really got buzzing at FanFest, a hub for athletes, visitors and local business during the UCI Road World Championships.

As the Men’s Elite racers were crossing the nearby finish line of their 32.9 mile ride, inside people were queuing up for a free tattoo.

Absolute Art Tattoo, an older local shop open since 1993, developed a flash sheet of Richmond and bike-themed designs specifically for the Worlds.

For those who don’t like commitment, or aren’t old enough --  two youngster proudly showed theirs off -- there is a solution. “Bike RVA” temporary tattoos sit in stacks by the hundreds in a bowl abreast a coffee table near a couch where people sat watching the tattooing.

Tattooist Keith Harper said  when Richmond Region Tourism approached the Absolute Art crew, they loved the idea. Turns out Mat Nicholson, Creative Services Manager at the agency, gotten tattoos at three different events he’s attended in Richmond. He said he knew it would be a perfect way to represent Richmond to the world.

It is, after all, the third most tattooed city in America.

The first tattoo of the day underway

That probably explains the long line before the first free tattoo – which would wind up being a catfish – was even inked. But plenty of visitors signed up on the waiting list.

A guy from Wisconsin, here running support for Team USA, said he was #17 on paper. He wondered if he would get in by closing time at 5 p.m.

If it didn’t work out, he would try again.

Harper, who has been with Absolute Art for nine years, will be tattooing all of the remaining days, which are Friday and Saturday from 2 p.m. – 5 p.m. and noon to 3 p.m. on Sunday.

“I moved to Richmond to go to college, and I absolutely love it here,” said Amanda McKenna, who at #5 on the list was more than ready for her 8th tattoo, the fifth one she’s gotten in Richmond. “And Absolute Art is doing the tattoo, and I’ve gotten several tattoos from them and I absolutely love them.”

Amanda McKenna, who at #5 on the list was more than ready for her 8th tattoo, the fifth one she’s gotten in Richmond.

Her choice was the fan design, with Richmond spelled out in cursive overtop.

And since there really isn’t such a thing as a free tattoo (also because you know, TIP) your payment is an obligatory Instagram and Tweet of that sweet new ink, tagged with #VisitRichmond.

If you go, expect to wait. There is one person nicely inking people for free. Sign up at the Visit Richmond booth and then walk around. There is plenty of swag to snag at the FanFest in the meantime.

Certainly all kinds of treasure can be found at the Visit Richmond booth.

People were waiting for their tattoo on the Mad Men-esque couch, while snacking on complimentary offerings of pimento cheese from Pasture, along with free chocolates by Kelly.  Over the weekend they will be giving out bags actually screenprinted on the spot by Studio 23.

“The second I found out we were getting a booth, my first thought was ‘it has to be different, it has to be awesome, it has to look like Richmond,’” said Greg Houser, Content Specialist at Richmond Region Tourism. “Richmond is a very aesthetically driven city and I wanted the booth to reflect that.”

“…All you have to do is engage with us on social media -- use that hashtag to show us your adventures, what you are up to the whole time you are at the race,” Houser said.

While many of the locals lament the races, the Richmond tourism industry is hard at work to literally make a permanent impression on the visitors.

As far as the guy tattooing, Harper says he would choose the railroad spikes for his own, if he was in the other seat.

Where: FanFest at 3rd and Marshall Streets
When: Friday and Saturday 2- 5p.m. and Sunday noon to 3 p.m.
Cost: Free with social media promotion, and of course, a tip for the artist.
Side note: First come, first serve