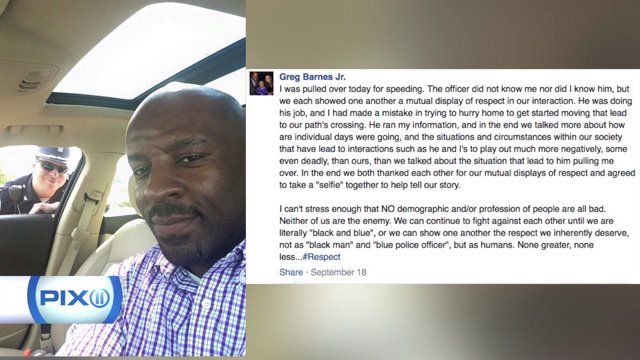 MUNCIE, Ind. -- Gregory Barnes Jr. was driving in his hometown of Muncie, Indiana when a patrol car pulled up behind him and signaled him to the side of the road.

In a time of tense relations between police and citizens, especially with communities of color, it's the opening scene to countless videos on social media. Outrage inspires action, and an angry, divisive conversation often follows.

After officer Shawn Cosgrove pulled Barnes over, he, too, took out his phone -- but the selfie he later posted on Facebook Friday has gone viral for all the right reasons.

In his post, which has been shared half-a-million times, Barnes, who works as a vice president of sales at STAR financial bank, wrote:

I was pulled over today for speeding. The officer did not know me nor did I know him, but we each showed one another a mutual display of respect in our interaction. He was doing his job, and I had made a mistake in trying to hurry home to get started moving that lead to our path's crossing. He ran my information, and in the end we talked more about how are individual days were going, and the situations and circumstances within our society that have lead to interactions such as he and I's to play out much more negatively, some even deadly, than ours, than we talked about the situation that lead to him pulling me over. In the end we both thanked each other for our mutual displays of respect and agreed to take a "selfie" together to help tell our story.

I can't stress enough that NO demographic and/or profession of people are all bad. Neither of us are the enemy. We can continue to fight against each other until we are literally "black and blue", or we can show one another the respect we inherently deserve, not as "black man" and "blue police officer", but as humans. None greater, none less...#Respect

The photo has gone viral, positioning the Internet's magnifying glass over the Indiana native and changing his life over the weekend.

I know for sure for sure if my granddaddy was living I know he'd be proud of me...

"I have to say that these last few days have been pretty crazy, both good and some bad," Barnes wrote Wednesday morning. "I'd be lying to you all if I said that I hadn't let some of the negative comments and posts get me down. I'm human, which, ironically enough, was what the initial post and pic was all about."

A large part of the attention has been positive, of course. He has had "tons and tons of offers for free meals or drinks." So many, in fact, that Barnes is now asking people to donate instead to the to the Muncie Boys & Girls Club and the Roy C. Buley Community Center.

He's also challenged those attacking him on social media to "put your money where your hate is" and donate $1 each to both organizations, which he credits with raising him from a small child.