Europe struggles to cope with migrants’ march of misery 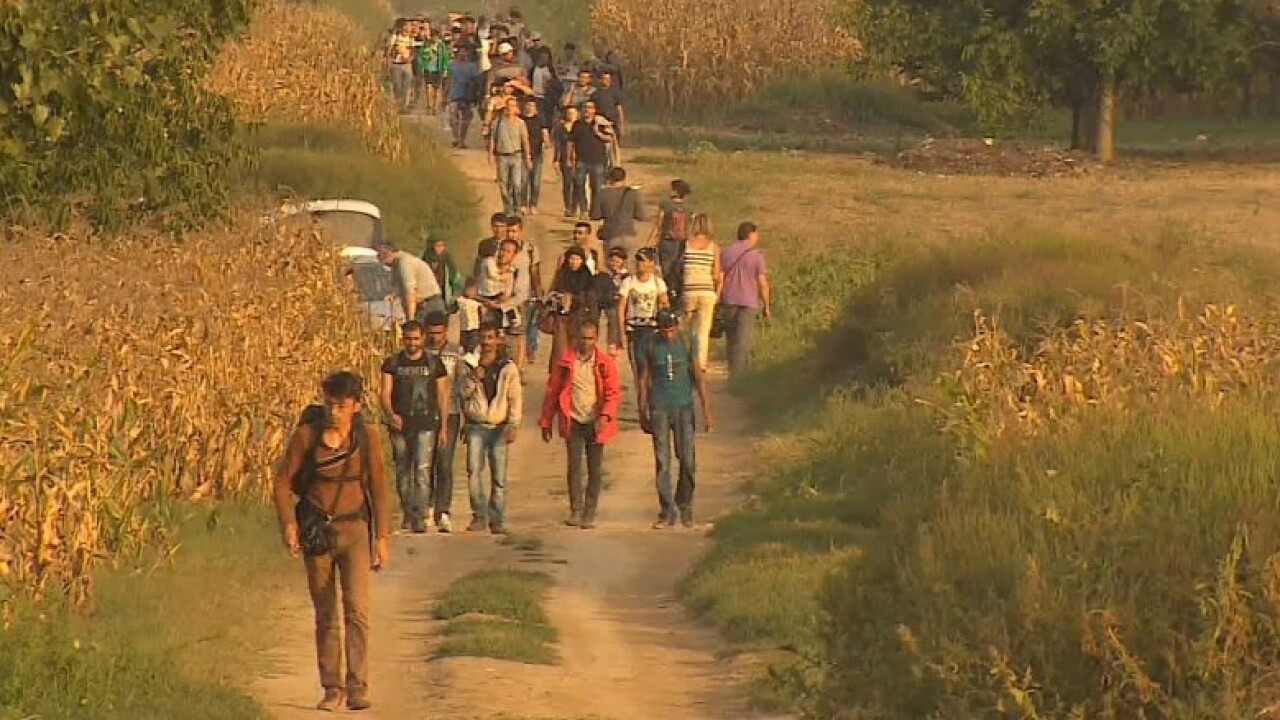 AT THE HUNGARIAN-AUSTRIAN BORDER (CNN) — U.S. Secretary of State John Kerry announced at a news conference in Berlin on Sunday that the U.S. will increase the total number of refugees it will admit each year, to 85,000 next fiscal year and 100,000 the year after.

Meanwhile, the main border crossing station between Hungary and Serbia reopened on Sunday, Hungarian government officials confirmed. The closure of the Roszke border crossing caused thousands of asylum seekers over the past week to try to travel through Croatia instead.

Nearly 1,600 migrants left the Croatian town of Tovarnik for the Hungarian border Sunday evening, according to the Croatian Interior Ministry. Croatian authorities are expecting more migrants at the border crossing. Transportation and temporary accommodations are being organized by the authorities to accommodate the new arrivals.

For days, hundreds of refugees from the Middle East made the final leg of their trip through Hungary on foot, walking the 4 kilometers (2.5 miles) to the Austrian border in the middle of the night, unsure of what was going to happen to them when they got there.

After a train ride from the Croatian-Hungarian border, about 300 to 400 people were trekking through the dark early Sunday with Hungarian police as their guides through the village of Hegyeshalom.

It had already been a long day for the refugees. They had been on the train since the morning. There was very little food or water. When they stepped off the train, they had no idea where they were or where they were going.

Austria lay ahead. Thousands a day before them have poured over that border from Hungary.

The loss of life continued elsewhere as refugees and migrants forged ahead on the dangerous journey from the Middle East and Africa to Europe.

The bodies of at least 14 refugees were recovered and another 24 refugees are missing in separate incidents in the Aegean Sea on Sunday.

At least 13 people — including 5 children and an infant — died when their boat heading to Greece collided with a cargo vessel in the Aegean Sea off the coast of western Turkey, according to a statement released on Sunday from the Turkish coast guard and Turkish state media.

Many of these passengers were believed to be Syrian, the Turkish coast guard said. Eight of the passengers were rescued and taken to hospital in Turkey. The coast guard dispatched a helicopter, five intervention boats and a search and rescue ship to try to rescue people involved in the incident.

In a separate but nearby incident, the Greek coast guard continues to search for up to 24 refugees who went missing when their boat sank off the eastern Aegean island of Lesbos, a Greek coast guard press officer told CNN.

In the EU centers of Brussels, Belgium, and Luxembourg, member countries remain deadlocked and divided over a common policy to shoulder the burden.

Farther along the migrant route, Germany is appearing less of a beacon of hope than it did just days ago. The government is working to reduce aid to asylum seekers in the country and deport more quickly those who don’t meet the official designation of political refugee.

And in spite of sympathy for refugees from the vast majority of Germans, bands of far-right protesters have shouted hate and venom at arriving refugees, throwing bottles at their buses. Dozens of empty, waiting shelters have been torched by arsonists.

At the other end of the migrant trail, many more thousands of weary, hungry, helpless and forsaken men, women and children pour in from the war-ravaged lands of Syria, Iraq and Afghanistan.

Hunger and misery are driving Syrian refugees in the Middle East out of tent cities pitched in neighboring countries that have taken in millions of them. As international generosity has worn thin, the U.N.’s World Food Programme has had to progressively cut food rations for lack of funding.

Europe is facing its largest refugee and migrant crisis since World War II. People fleeing the violence in Syria account for the largest portion of those arriving on European shores, but there are many others on the move from African nations and elsewhere.

Nearly 475,000 migrants have crossed by boat into Europe seeking safety and sustenance so far this year, according to the International Organization for Migration. More than 2,800 have drowned or disappeared during the perilous journey.

Nearly 350,000 of the desperate travelers have landed in Greece, and more than 120,000 in Italy. From there, they try to reach the more sought-after EU nations for migrants, such as Germany and Sweden.

Germany is expecting 1 million asylum applications this year and has a backlog of more than 260,000 cases.

France has agreed to take tens of thousands and Britain 20,000. Switzerland said that if Europe can come to agreement, it will take 1,500 refugees. Most of Eastern Europe has resisted committing to a number.