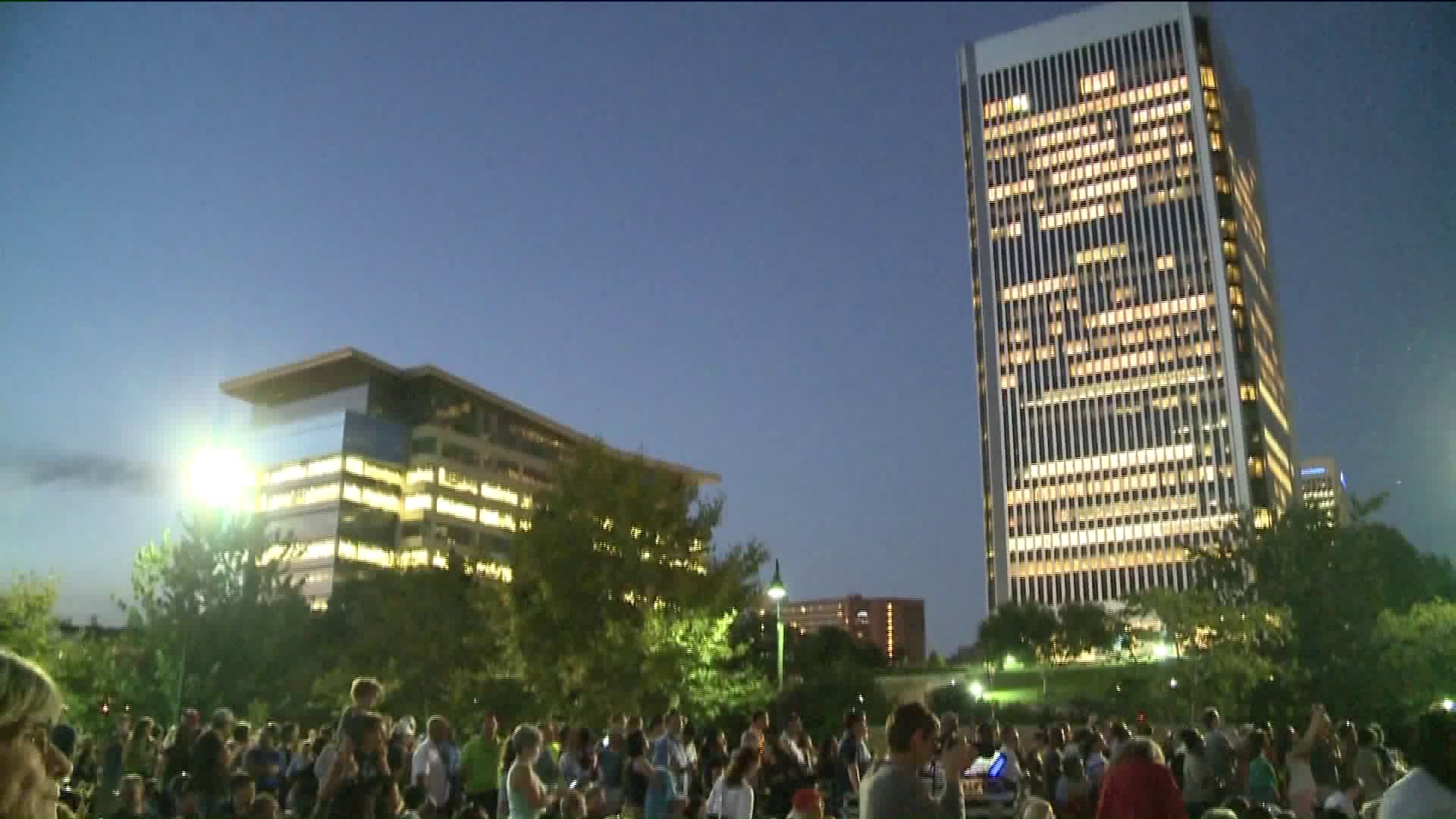 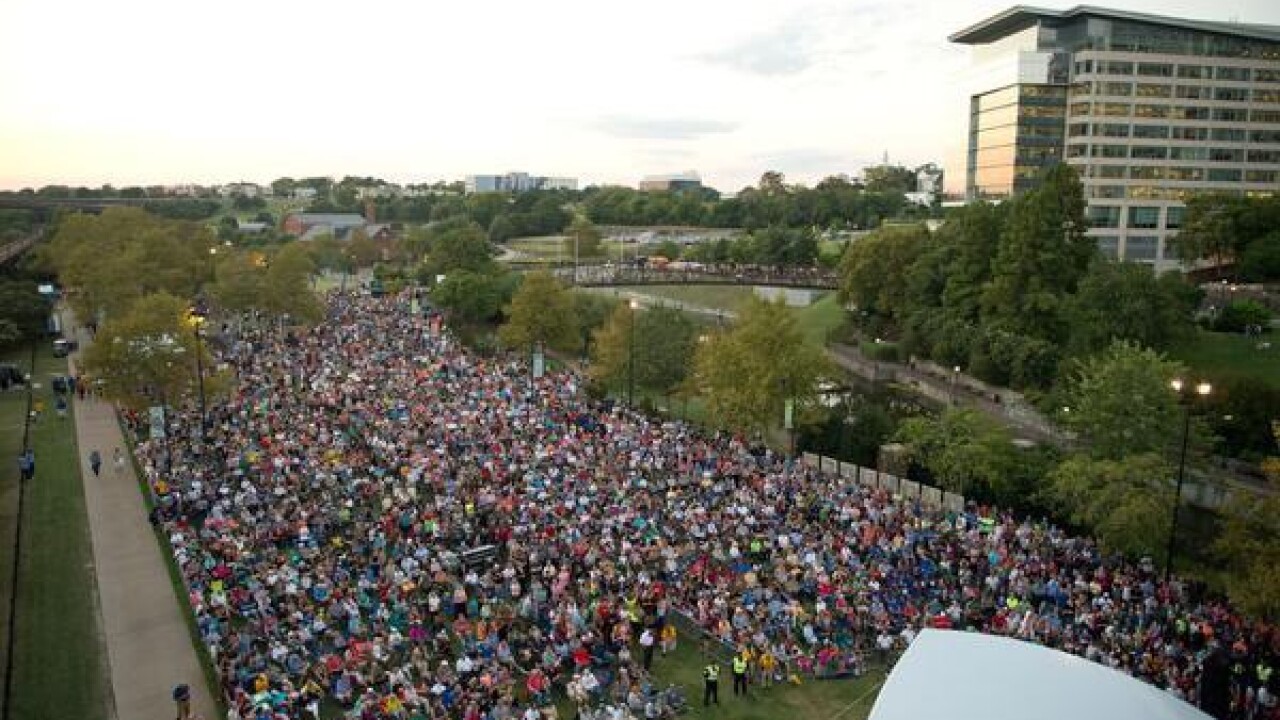 RICHMOND, Va. -- The UCI Road World Championships in Richmond have officially started. Politicians and organizers opened the event on Friday evening with a celebration Brown’s Island that also showcased singer Rayvon Owens and the Richmond Symphony to the stage, while a fundraiser at the Virginia Museum of Fine Arts brought together the cycling and nonprofit communities.

More than 15,000 people attended the festivities on Brown's Island in downtown Richmond, according to the UCI. The four co-chairs for the event -- Mayor Dwight Jones, Gov. Terry McAuliffe, Sen. Mark Warner and Dominion Power CEO Thomas Farrell -- addressed the crowd at the three-hour event.

“Tonight is the culmination of a bold vision and a long road,” Jones said, who was the first to speak on stage.

After welcoming the city’s guests and thanking the thousands of race volunteers, Jones emphasized that on Monday it will be exactly five years to the day when the city announced Richmond had won the opportunity to host the UCI Road World Championships.

“Only the second time in 82 years that these races have been held in the United States of America,” Jones said.

Outside the gate of the event, food trucks were lined up serving long lines of attendees. Inside, there was official UCI merchandise on sale, beer trucks and more food, much of the vendors representing the local community.

Inside the #foodtrucks outside Brown's Island #Richmond2015 #iPadJournos @CBS6 pic.twitter.com/uNZCg4hv8s

Each of the four co-chairs made a point to mention the anticipated millions of dollars in economic return for the city and the state during the next week’s events.

Across town at the Virginia Museum of Fine Arts, the Richmond Cycling Corps elicited support for its causes by auctioning off 23 hand-made and hand-painted bike frames through a partnership with Art 180, a local non-profit.

Collaboration between local artists and nonprofit organizations has become widely visible throughout Richmond in the months leading up to the bike race, with painted bike racks and doors appearing all across the city to draw attention to charitable causes.

@mattlivelyart hand painted -- the auction proceeds of this and 22 other bike frames benefit #rcclegacy2020 pic.twitter.com/M3So2uCfb4

Outreach to at-risk youth is the common denominator between Art 180 and RCC. Art 180 reaches and empowers children through group art instruction, while RCC has created the first inner-city mountain biking team in the country with middle and high school students living in Richmond public housing.

The gala at the VMFA brought benefactors from the cycling and nonprofit communities together. They did not only celebrate the work the RCC has accomplished so far, but focused their attention on Legacy2020, the next chapter in RCC founders Craig Dodson and Matt Crane's vision to create a pathway for at-risk youth at Armstrong High School, MLK Middle School and beyond.

Legacy2020 has the goal that in 5 years that one of the members of the program will take Dodson's place as the role model and mentor for the next generation of children to use cycling as an avenue towards socio-economic improvement.

"I want to build a legacy at this school -- one that is hinged on a prestigious program -- one that students are proud of -- and this can't be done with an abundance of half-hearted students,” said Dodson. “It can only be created by a few, who become the beacons of example to many."

Since the start of the program in 2010, they have achieved great success with their team, building the first inner-city single-track mountain bike course and taking third place in the 2015 Virginia High School Mountain Bike Series.

With the international cycling community focused on Richmond for the next week, many area organizations have shifted their strategy to attract visitors’ attention. An estimated $50,000 raised from the opening night auction is incentive for the Richmond Cycling Corps to keep its focus on the most vital part of their mission.

"The World Championships in Richmond is a fantastic opportunity for everyone," Crane said. "But as for us, we'll be here doing what we always do. Our first priority is to do everything we can for these kids, to help them succeed."

By Matt Leonard and Margo Maier (Special to WTVR.com)