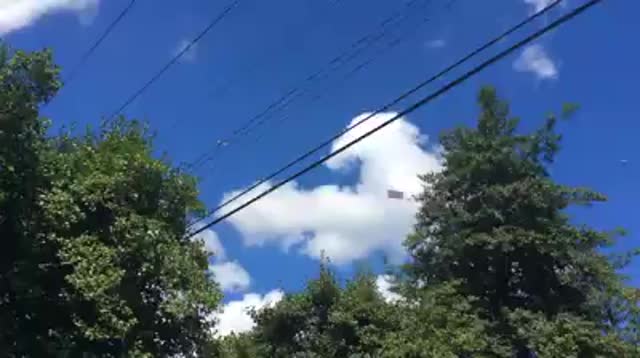 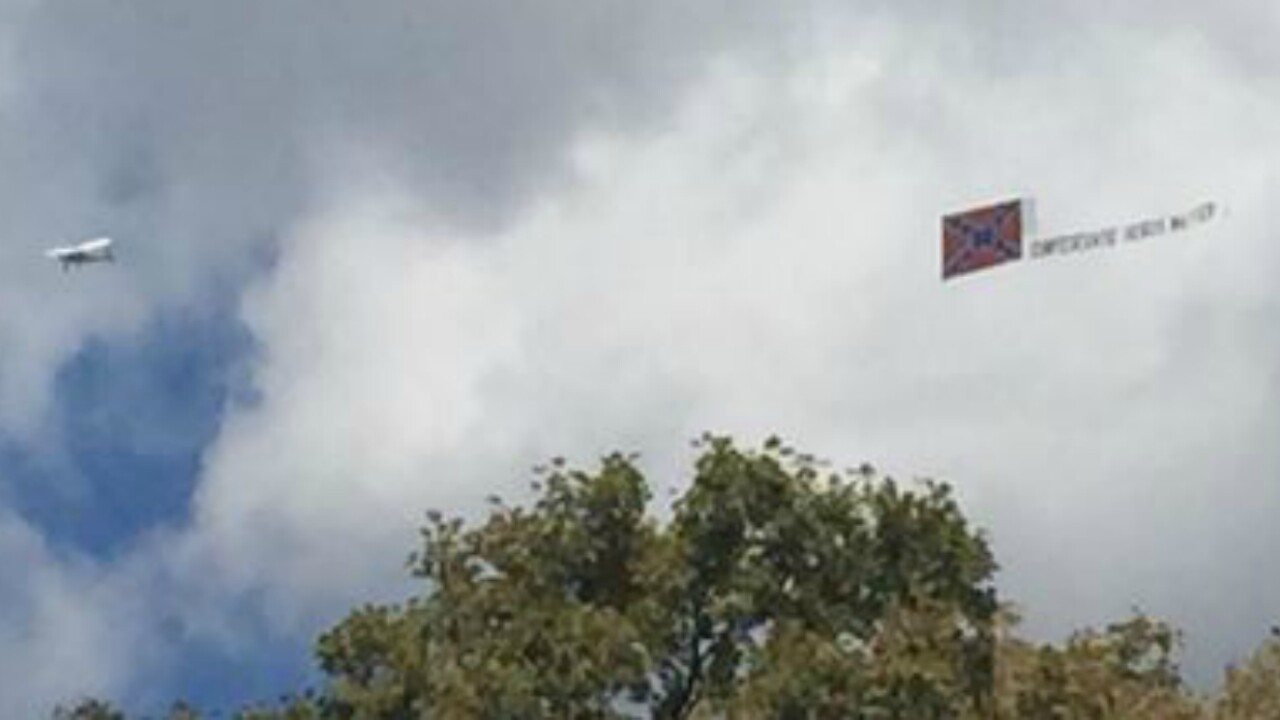 The Virginia Flaggers had previously released a statement calling the press conference by the Defenders an “obvious ploy to garner publicity.” Phil Wilayto, a founding member of the Defenders, said he anticipated a physical presence from the Virginia Flaggers and contacted the Richmond Police Department to ensure no conflicts would arise between the two groups.

Steve Drew, acting deputy chief for Richmond Police, had stated that he would be on site in case of any possible disruptions. A significant police presence was at the protest and press conference at the Jefferson Davis Monument, in the form of almost a dozen officers and several police vehicles.

Three activists from the Defenders spoke and then answered questions of the press, as the Virginia Flaggers prop plane circled overhead. The plane continued to circle over Monument Avenue even after the crowd had dispersed. No physical conflicts arose during the 30-minute protest and press conference.

Ana Edwards, chair of the Defender’s Sacred Ground Historical Reclamation Project, spoke first. She said that the Defenders had reached out to the UCI Richmond 2015’s four chairmen and additionally to the UCI International Committee in Europe, asking both to change the route. But her request was rejected.

“We are here today to tell the world that most Richmonders do not support showcasing these monuments to Confederate military and political leaders during this world famous sporting event,” Edwards said.

Edwards listed some monuments the cycling route will go by, in addition to the statue of Jefferson Davis, such as the statues of Robert E. Lee, J.E.B. Stuart and Stonewall Jackson.

“The choice of Monument Avenue [as a race route],” Edwards said, “was deliberate and probably obvious.”

The Defenders do not have any further demonstrations planned during the bike race next week.

“I think what you will see throughout the race,” Edwards said, “and particularly toward the end of the race, will be more and more signage like this.”

She was referring to signs that many of the protest and press conference attendees were carrying, with slogans such as “Truthful History Heals” and “Protect Sacred Ground,” the second of which refers to Shockoe Bottom.

“I think the focus of that will be some visibility and the opportunity for people to learn more by following the hashtags and the websites that the information will provide,” Edwards said.

Half an hour after the press conference wrapped up, the Virginia Flaggers stated on their Facebook page that the prop plane flying a Confederate flag was their demonstration. The status posted by the group ended with “Yes, we sent the pilot the correct spelling,” in reference to the misspelling of “heros” on the plane’s banner.

In an interview with VCU’s “iPadJournos” project at the Field Day of the Past in Goochland County, Virginia flagger Susan Hathaway said that “we definitely gave the correct information to the pilot and apparently somewhere in the translation he missed it when he made the banner.

“He misspelled the word and apparently that turned to a bigger issue than the banner itself,” she added. “Even with the ‘e’ missing, that point was very well understood by all who saw it. And that was our point.”

Watch the full interview with Susan Hathaway from the Virginia flagger below:

Scroll down for tweets and photos from the event at the Jefferson Davis Monument on Saturday:

Shooting in Charleston indicates "our work is not done", says Edwards. "Many are calling for removal of [statues]" #ipadjournos

"We do not have any specific [demonstrations] planned for during the race," says Edwards pic.twitter.com/p373h1XohB

Speaker asked if anyone was here to defend Confederate monuments, no one spoke up. VA Flaggers previously said they would have a presence

Press conference has wrapped and dispersed, plane continues to fly near and over Monument #ipadjournos pic.twitter.com/Esja2XU4rT

By Diana DiGangi and Sean Korsgaard (Special to WTVR.com)