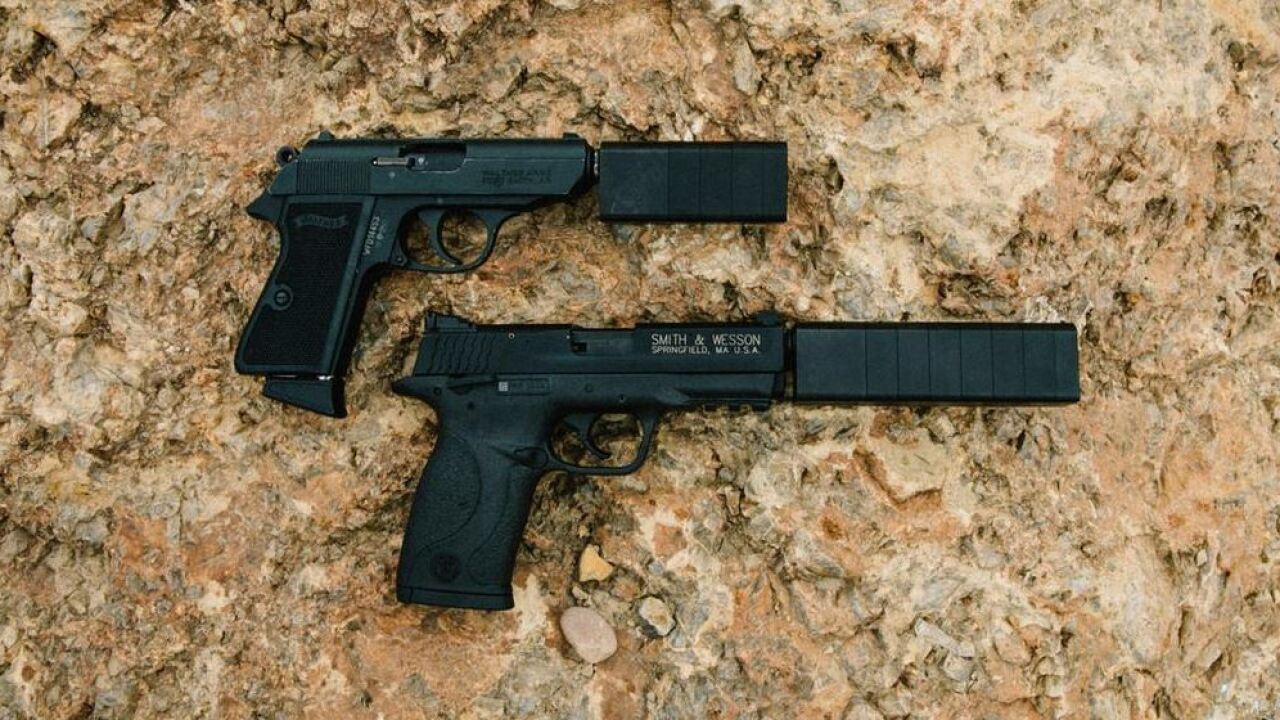 NEW YORK — A silencer manufacturer has unveiled an unusual new gun that’s meant to be seen but not heard: a pistol with a built-in silencer. The Maxim 9 is a pistol with a silencer integrated into the gun, according to SilencerCo, a silencer manufacturer in Utah. This is different from most silencers, which are separate, canister-shaped mufflers that are screwed onto the ends of gun barrels.

The Maxim 9 is a 9 mm semiautomatic handgun with a 15-round magazine. The silencer gives it a distinct and futuristic look, like a weapon from a science fiction movie.

“The Maxim 9 is a duty pistol, short, quiet, reliable, durable and can use any [9 mm] ammo,” said SilencerCo CEO Joshua Waldron.

The handgun-silencer combo is not unprecedented. According to the NRA, the Office of Strategic Services (the CIA’s predecessor) used British-made pistols with built-in suppressors during World War II, and Sturm, Ruger currently produces them.

But Waldron points that the Maxim 9 is a more efficient design than the old models, which were “highly specialized, and not accurate or reliable. They used special ammo and quite frankly were not widely adopted because they were ridiculous.”

He also said that the Maxim 9 is a more powerful gun than the .22-caliber silencer-handguns developed by Sturm, Ruger, which makes it better suited for “personal protection.”

The Maxim 9 could have market potential. Silencer sales are booming, despite tight restrictions, and prices ranging from $325 to $2,500. According to the most recent figures from the ATF, the number of registered silencers jumped 38% year-over-year to 792,282 in February 2015.

Waldron says that silencers are popular with hunters and people who do target shooting who want to protect their hearing.

The Maxim 9 will go on sale next year. It will be subject to the same federal guidelines that apply to silencers — which are more accurately called suppressors. They suppress the noise of a gun shot, though the shot is still quite loud. They do not silence guns completely, the way silencers do in the movies.

Suppressors are more rigorously regulated than most guns. The process of buying a gun usually takes minutes, but buying a silencer takes months.

Guns typically require a background check when purchased from a federally licensed dealer. The buyer provides photo ID at the gun shop and electronically submits a form to the Federal Bureau of Investigation. The process often takes about 20 minutes.

But when buying a suppressor, or any gun that falls under the National Firearms Act including full automatic machine guns and sawed-off shotguns, the customer has to mail or fax photo and fingerprints to the Bureau of Alcohol, Tobacco, Firearms and Explosives and pay a $200 tax. Approval can take up to nine months.

Suppressors are also subject to state law. A few states ban them outright. But they’re legal in 41 states, up from 37 four years ago.

Waldron said the growing popularity, and the gradual easing of state restrictions, is partly because of the industry’s efforts to educate the public through an ad campaign called, “Yes, silencers are legal.” The sales jump has prompted him to more than double his staff over the last year, to 230 workers.