6 takeaways from the Republican presidential debate 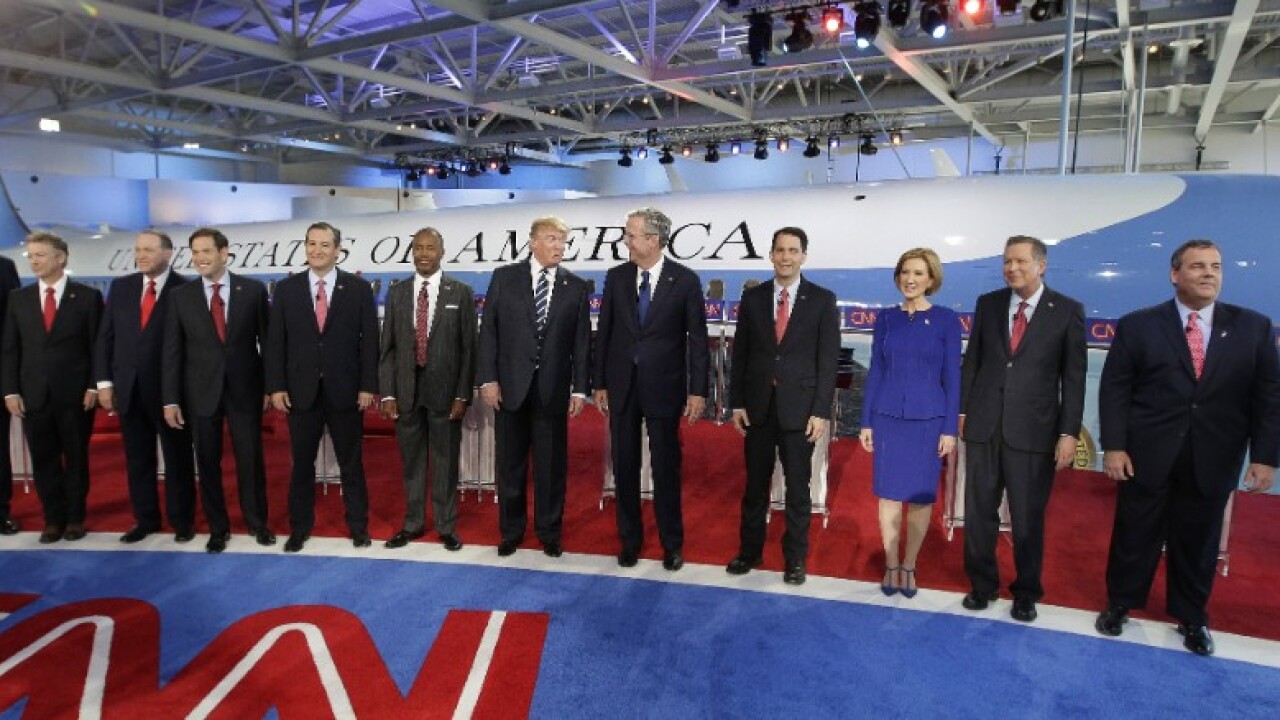 Donald Trump finally took some punches, Carly Fiorina grabbed control, Jeb Bush woke up and Marco Rubio and Chris Christie elbowed their way into the fray on a crowded stage. Everyone else just tried to crash the party.

The CNN Republican debate at the Ronald Reagan Presidential Library on Wednesday crackled with confrontations between galloping insurgents and professional politicians desperate to channel the torrent of grass-roots fury that is consuming the campaign.

Here are the top takeaways from a debate that could significantly reshuffle the GOP pack.

Fiorina is for real

Carly Fiorina walked the walk after talking the talk.

She dominated the crucial first hour of the debate marathon when viewers were at their freshest. She confronted billionaire businessman Donald Trump, slammed President Barack Obama and Democratic front-runner Hillary Clinton and likely foreshadowed a surge in the GOP field.

Her response on Russia epitomized the clarity of her entire performance. “Russia is a bad actor, but Vladimir Putin is someone we should not talk to, because the only way he will stop is to sense strength and resolve on the other side,” Fiorina said.

And her passionate comments on leaked and edited Planned Parenthood videos produced by an anti-abortion group will be played over and over on conservative talk radio.

“I dare Hillary Clinton, Barack Obama, to watch these tapes. Watch a fully formed fetus on the table, its heart beating, its legs kicking while someone says we have to keep it alive to harvest its brain. This is about the character of our nation,” she declared. Planned Parenthood denies the charges leveled at it.

CNN senior political analyst and former Obama political aide David Axelrod said Fiorina, the only woman on the stage, changed the trajectory of the race.

“Carly Fiorina had a great opportunity tonight. I think she took full advantage of it — she is going to move up in the polls as a result,” Axelrod said.

Fiorina’s one uncomfortable moment came when Trump eviscerated her record as CEO. But she fought the billionaire to a draw by accusing him of building his business on “mountains of debt.”

Asked what her Secret Service code name would be, Fiorina chose that of famed racehorse Secretariat. She’s already two-thirds of the way to a triple crown of debate wins. But can she now make a real run at the nomination?

It’s not just about The Donald

For the first time in several months, the GOP race did not revolve around Trump. The billionaire opened the debate with a brutal assault on fellow candidate Rand Paul, a Kentucky senator, but failed to dominate the showdown as much as many pundits expected.

He held his own, and true to form hit back hard when attacked.

But as the debate moved into a thicket of issues, especially foreign policy, the advantage of Trump’s flamboyant, fill-every-room personality seemed to erode.

Early on, Trump raised his eyebrows and held up a finger to demand entry into the fray. But as the clash went into a third hour, he seemed to mellow. He even slapped palms with arch-foe Bush at one point and gave Ben Carson a tap on the elbow when the retired neurosurgeon didn’t castigate him over a waffling answer about discredited links between vaccinations and autism.

Trump, who has shocked pundits with his barnstorming rise to the top of the polls, probably didn’t disappoint his fervent anti-establishment army. But the fact that his bombast didn’t command the stage may prompt voters who have not followed the race closely to wonder what the fuss was about.

“They saw him like a boxer who has finally bled for the first time,” he said.

Trump’s most awkward moment came when he tried to make it up to Fiorina over his harsh comments about her face in Rolling Stone magazine.

The pros have got game

It’s been grim for professional politicians amid the eruption of fury at Washington that has consumed the presidential campaign.

But office holders like Sens. Marco Rubio, Ted Cruz and Rand Paul along with sitting governors like Chris Christie showed they can bring it, too.

Rubio, a Florida senator, made up for a slow start with fluent discussions on foreign policy, lacerating Obama over turmoil in the Middle East, and appeared to win an exchange with Trump on national security by deploying a mastery of detail and a sweeping global mission that the front-runner failed to command.

Still, Rubio also won plaudits after the first debate and it didn’t help him climb above single digits in the polls.

Christie might have done himself the most good. The blunt-talking New Jersey governor was supposed to be the bully in the field, but Trump stole his schtick. So Christie tried a different tack, asking for the camera to be turned to the audience in his opening statement to symbolize it was not in fact “all about me. It’s about our country.”

His swipe at Trump, assault on Clinton and campaign message readjustment could get him a second look among some voters.

Jeb Bush was better. But better might not be enough. The establishment pick with the $100 million war chest jousted with Trump and showed more life than in his disappointing first debate appearance last month. Even his chief tormentor was impressed.

But the question for the former Florida governor is whether his performance will fire up a campaign stuck in the doldrums.

He did have some good moments. Bush finally solved the riddle of how to deal with the elephant in the room — his own brother George W. Bush’s legacy.

“There’s one thing I know for sure. He kept us safe,” he said, recalling the iconic image of the 43rd president atop the smoking ruins of Ground Zero after the Sept. 11, 2001, attacks. Bush also scored when he demanded an apology from Trump for comments he made about his wife and had a human moment when he admitted to smoking pot 40 years ago.

Yet he is not the establishment giant pundits had expected to see at the start of the race. He used a question on his preferred Secret Service codename to hit back at Trump’s claims that he’s running a “low-energy campaign,” quipping that he would be known as the high-powered battery “Eveready.” But it’s not clear that viewers agree with him.

It might have been the night when conservative gushing about the quality of the 2016 field was justified. None of the candidates — even the political novices — committed a clear gaffe. Several shone. But with an unwieldy field of 11 in the top-tier debate, even a three-hour conversation didn’t provide enough time for everyone to show what they can do.

Cruz, a Texas senator, had a flurry of good moments — talking especially to his core constituency of evangelical voters — and made a strong case against what he said was a “catastrophic” nuclear deal. Similarly, former Arkansas Gov. Mike Huckabee was preaching to the converted when he stood up for Kentucky court clerk Kim Davis, who refused to issue same-sex marriage licenses. He said Muslims at Guantanamo Bay got accommodations for their faith while a Christian women from Kentucky didn’t. But these candidates’ moments were few and fleeting.

Others, meanwhile, didn’t do enough with the scarce time they had. Ohio Gov. John Kasich, for instance, struggled to impose himself, and he may find momentum whipped up by a strong first debate performance stalled. Carson, the neurosurgeon who has shot nearly to the top of the polls, was his normal polite self. But his difficulty in coming out of his shell might have hurt him as he failed to stand out. Wisconsin Gov. Scott Walker also didn’t set himself apart on a night when he needed to impress to shore up his nose-diving campaign.

And despite a strong showing in the undercard session, South Carolina Sen. Lindsey Graham’s contribution could be an afterthought.

Base plays could backfire

The candidates battled to get on the record about Planned Parenthood. Christie, for instance, said that Clinton “believes in the systematic murder of children in the womb to preserve their body parts.” Contenders also played to the conservative base as they squabbled over immigration reform, with Trump renewing his vows to build a wall on the Mexican border and Rubio explaining that he had now repudiated his own earlier effort to pursue comprehensive immigration reform.

In a debate about military intervention, candidates split down the middle, with Trump, Paul and Carson saying they opposed the Iraq War and Bush and Rubio accusing Obama of fomenting unrest and challenges to U.S power by pulling back from the world.

But any Democrat would likely be more than happy to discuss women’s health issues, immigration reform and the Iraq War in the run-up to November 2016.