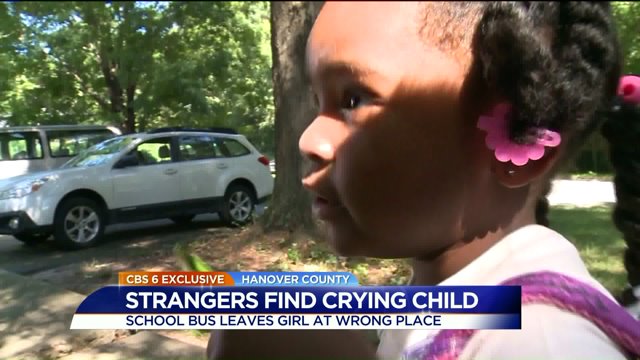 HANOVER COUNTY, Va. -- A Hanover family wants answers after their three-year-old daughter was dropped off a school bus, at the wrong location, while her older sister remained on board.

It wasn't the call mom Shay Ward expected to get on her daughters' first day of school. The three-year-old somehow got off the bus at an apartment complex on Cold Harbor Road.

Peyton and her 4-year-old sister were supposed to go to a nearby daycare center.

"She's traumatized. She's scared to ride the bus. She cries when it's time to go to school. She'll cry all morning," Ward said.

When Ward's daughter got off at the Beaverdam Creek Apartments and realized she didn't know anyone, neighbor Sherrie Doane said the 3 year old cried hysterically.

A Hanover family wants answers after their three-year-old daughter was dropped off a school bus, at the wrong location, while her older sister remained on board.

She was calling for her mommy, Doane said. Sherrie and her husband Kent Hockaday and other parents stayed nearby.

Doane's husband noticed a tag on the child's book bag and called the daycare center.

Someone from that daycare picked Peyton up.

"We happened to see she was there and there was no adult. Another lady was standing by and held her, wiped her face and tried to get her to calm down," Doane explained.

She believes the little girl was in their complex for about 15 minutes.

Doane said her husband also called the school system to report what happened.

"I'm just glad that we were there to help. I would hope that someone would do that for my child if she was in the wrong place," said Doane.

Ward said she can't thank the couple enough for how they helped little Peyton.

The daycare told CBS 6 it notified the Hanover school system as well.

One of their workers said she realized Peyton didn't show up on the bus driven by a driver who is new to the route.

The Hanover school system said now a monitor rides on that bus to escort small children off the bus and to check parent IDs.

"Student safety is our highest priority, and it is a responsibility that we take very seriously.  Regrettably, a student was mistakenly dropped off at the wrong bus stop last week without an approved parent or guardian present.  Fortunately, the child was safely and quickly reunited with a caretaker."

"School staff communicated with the family as soon as the situation was known, which included our deepest apologies.  Since then, there have been multiple follow-up communications with the family to reassure them of our commitment to their child’s safety."