Soldiers in camo pose for photo in uniform to ‘normalize breastfeeding’ 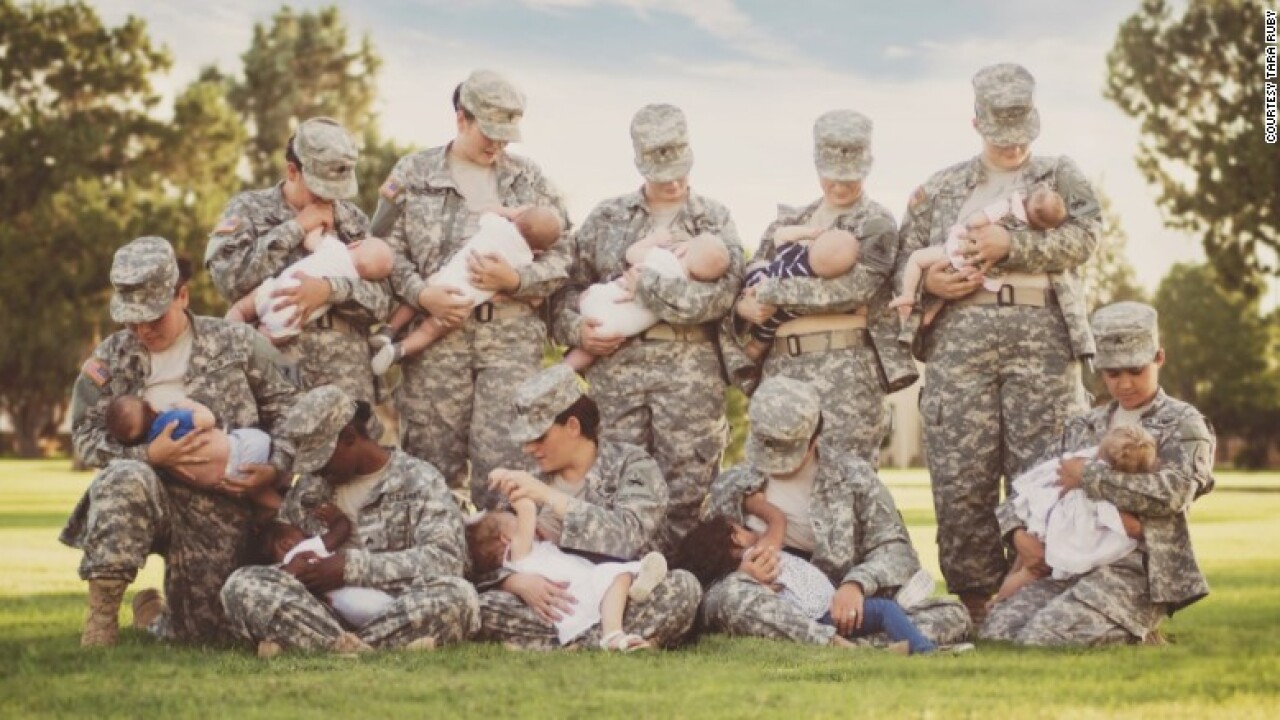 There were no lactation rooms or dedicated spaces for breastfeeding mothers when Tara Ruby was on active duty in the Air Force from 1997 to 2001.

After her first son was born, Ruby remembers ducking into empty offices and bathrooms — anywhere she could find privacy for 20 to 30 minutes at a time to pump.

That’s why she was thrilled to learn about a new nursing room in the headquarters of Fort Bliss, the Army post in El Paso, Texas. It has comfortable chairs, a refrigerator for storing milk and a sink — small things that make a big difference when you need to expel breast milk every few hours.

All that was missing was a touch of decor on the bare walls. To make the room more inviting, Ruby, now an El Paso photographer, offered her services to donate pictures for the room.

Her vision: Portraits of uniformed soldiers breastfeeding their children.

“I thought it was be nice to offer some photographs as an additional show of support,” she said. “Seeing a picture like that helps mothers understand they can be an active soldier and provide support to their children.”

The shoot went off without a hitch, resulting in a photo that’s drawing praise for normalizing breastfeeding within the hypermasculine context of the military.

Fort Bliss Public Affairs and Garrison Command approved the shoot, an Army spokesman said. Through the Fort Bliss support group for mothers (full name, Pregnancy and Postpartum Physical Training Program; P3T for short) Ruby sought active duty soldiers to model in the photos. She thought she might get two or three volunteers; 10 women showed up for Thursday’s shoot with their children, proudly wearing their boots and camo.

“I think it’s great the Army is supporting active duty mothers,” Ruby said. “Sometimes, you hit a point in your military career where you have to choose between being a soldier and a mother, and a photo like this helps mothers so they don’t have to choose. ”

Ruby posted the photo Thursday night on her Facebook business page. By Friday morning, for reasons unknown to her, it had been removed from her page and from other pages that had shared it. (Facebook did not immediately respond to a request for comment.) She reposted it Friday morning, thanking everyone involved for supporting her vision to #normalizebreastfeeding.

“Through the guidance of my military friends, the Fort Bliss P3T Program and Breastfeeding in Combat Boots, our Garrison command and our Public Affairs, we were able to show that even our mommies in uniform can provide for their babies,” she said. “Breastfeeding their babies doesn’t make them less of a soldier, I believe it makes them a better one. Juggling the tasks and expectations of a soldier, plus providing for their own in the best way they possibly can, makes (these) ladies even stronger for it.”

Within 24 hours the photo had been shared more than 4,000 times, generating hundreds of positive comments.

As one person said, “Thank you Tara, Fort Bliss, everyone involved to make this possible and an extra big thank you to theses ladies and babies who participated to capture this photo. This is a beautiful way to show how much women give of themselves to country and family.”

Such critiques miss the point, Ruby said. The Army stands by the women in the picture and the idea it promotes. The creation of a nursing room shows the Army is taking steps to implement policies demonstrating that support, she said.

“Practically speaking, it’s a matter of retention,” she said: “Mothers need support so they don’t have to choose between family and service.”