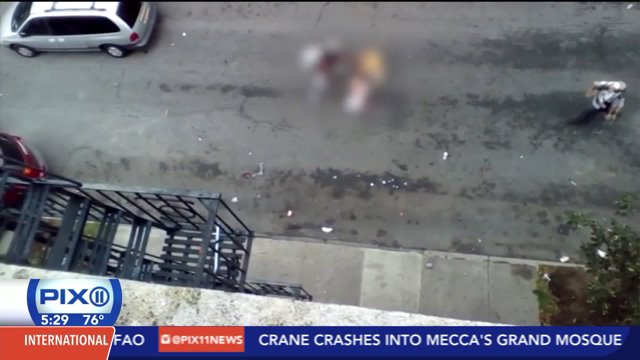 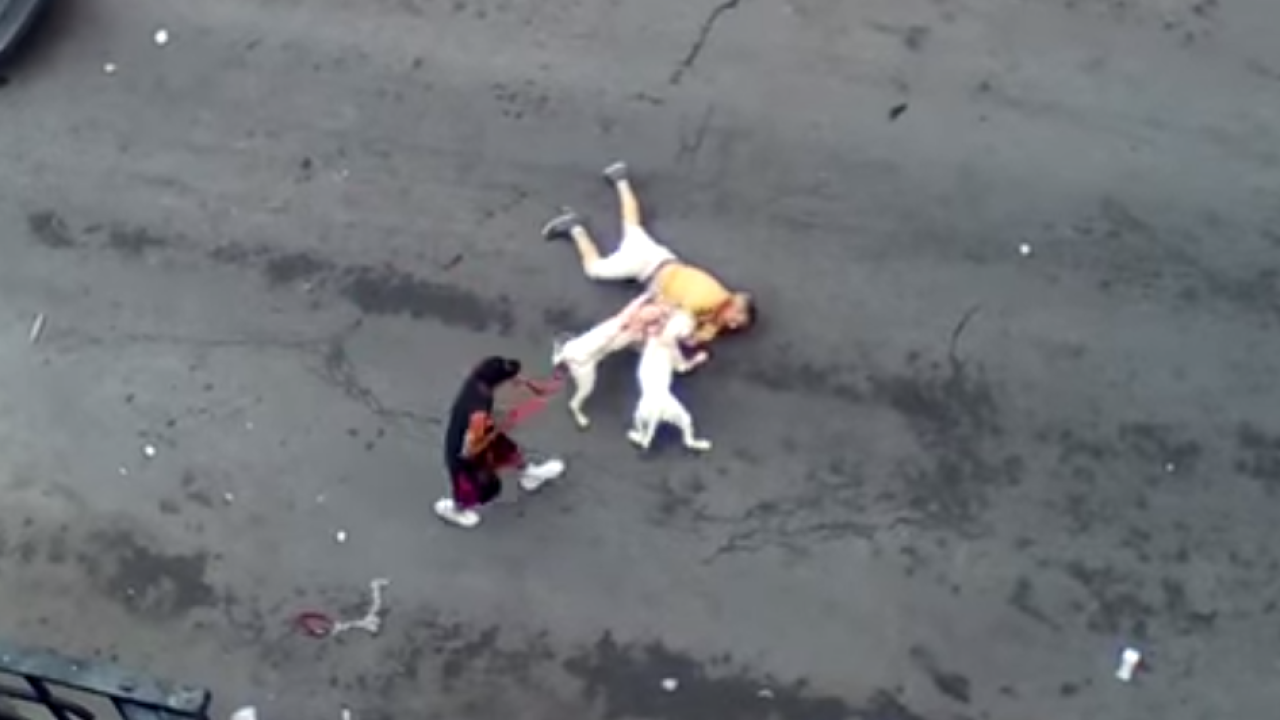 WARNING: This video contains material that some viewers may find disturbing due to its graphic nature. Viewer discretion is advised.

NEW YORK -- A pair of pit bulls left Francesco Bove so badly mutilated that a priest read him his last rites outside a New York church.

"I think I'm going to die," the bloodied 62-year-old artist told the priest, Bove's son recalled Saturday. "But the priest made him promise that he will fight until the end."

The gruesome attack Friday was captured on video from the window of a tenement in the Bronx. The pit bulls are seen clamping onto Bove's arms with their jaws, shaking their heads violently, dragging him several feet toward the curb.

Good Samaritans try to stop the assault -- swinging a chain at the animals, spraying them with water. They attempt to encircle Bove, but the dogs swerve around to continue the attack. Still, the people probably helped save Bove's life.

"I got to the hospital and he was in pieces," Bove's son, Anthony Bove, said, describing gaping holes in his arms, a severed ear and the other split in half, and lacerations all over his body.

The horror began when the dogs' owner, Cynthia Oliver, 55, exchanged words with the victim, said NYPD spokeswoman Detective Annette Markowski. Oliver was holding the pit bulls and dropped the leash, she said. The dogs attacked.

But Anthony Bove said his father told him there was no altercation, no words exchanged.

Francesco Bove was walking to Our Lady of Mount Carmel Church when one of the dogs pounced, followed by the other, according to the son.

"The dogs started biting," Anthony Bove said. "He's trying to push them away. They overpower him."

Oliver was taken to a hospital for a psychological evaluation before she was arrested on eight counts of assault and two counts of reckless endangerment, Markowski said. It's unclear whether she has an attorney.

In the video, another man steps in to help after Bove is knocked to the ground. The man uses his hands and legs, trying to keep the dogs at bay, but the animals find their way back to Bove.

The good Samaritan is knocked down. Screams are heard. "Let him go!" someone yells.

At least eight people on the street try to help as the pit pulls drag Bove away from the small crowd.

A woman can be heard off camera. It seems she is frantically calling 911. "These two dogs are outside attacking this man!"

One man is seen firing a stream of water at the dogs with a hose. Bove lies in a pool of blood.

"Hurry up, these dogs are attacking a man!" the woman yells off camera. "He's in the street bleeding!"

Police said Bove and the first man who jumped in to help -- an unidentified 46-year-old male -- were taken to St. Barnabas Hospital. The younger man, who suffered lacerations on his arms, was later released, according to Anthony Bove.

Francesco Bove, an artist and restoration expert from Brooklyn, is in stable condition after undergoing surgery, according to his son. His severed ear was reconstructed. He will have another operation on Monday.

"My father joked, 'If those were two lions, I wouldn't have made it,'" Anthony Bove said. "He's a really tough guy."

The elder Bove suffered nerve damage in his hands and hasn't been able to move his fingers, according to the son.

"He's an artist and does high-end restoration," Anthony Bove said. "He's very passionate about his art. If he couldn't move his hands I don't know how he would take that psychologically."

The pit bulls are now in custody of animal control authorities, Markowski said.

That worries the Boves, who own a pit bull named Gina as well as five cats.

"My father feels terrible that the dogs are probably going to be put to sleep," Anthony Bove said.

"The pit bull is not an inherently evil dog. But ... these pit bulls might have been trained as guard or attack dogs. He remembers the dogs licking his blood off the ground. They wanted to finish the job. That's very disturbing to him."