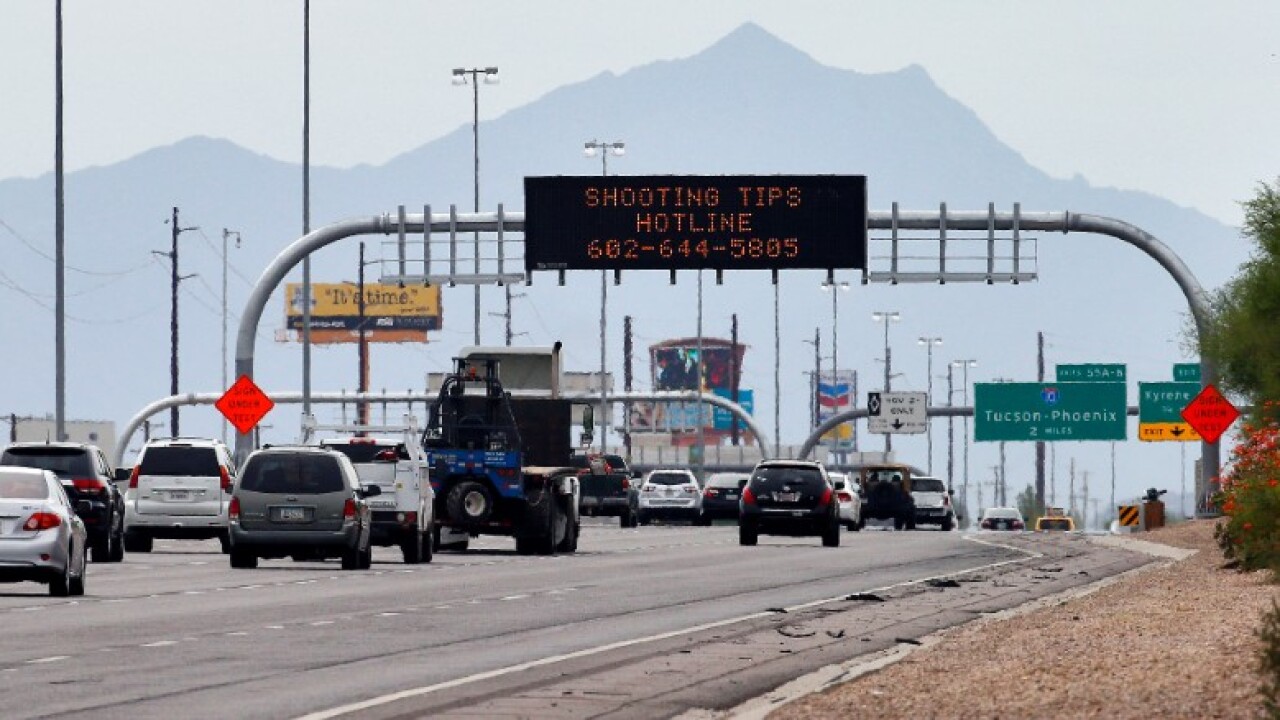 The civilians — armed with guns, knives, mace and other weapons — call themselves “Bolt Force.”

Their mission: Helping authorities solve a rash of shootings along a busy stretch of Interstate 10 in downtown Phoenix and elsewhere in the Arizona capital.

They are a stealthy bunch, all dressed in black. They claim 17 members, including men and women of different races. They can be spotted stalking above highway overpasses and patrolling nooks and alleyways around Interstate 10.

The founder goes by one name, Bolt, for security reasons, he says. He jokingly calls the group “guardian angels on steroids.”

Authorities believe some of the shootings may be the work of copycats. Two additional shootings along roadways elsewhere in the capital late Thursday morning could be someone trying to emulate the earlier shootings. On Friday, police were looking at another report of shots fired, this time on I-17, reported CNN affiliate KNXV.

A man was being questioned in connection with the spate of shootings Friday, according to the Arizona Department of Public Safety. He was arrested on a charge of marijuana possession, but has not been charged in the shootings, the department said.

“He is not our prime suspect,” DPS spokesman Bart Graves told CNN on Saturday.

“We’ve been getting a lot of tips and a lot of leads,” he said. “It’s fair to say some of those resulted in us locating and talking to him. It is our hope that one lead leads to another.”

The latest incidents are being investigated as separate shootings.

Graves said some incidents involved the firing of bullets, and pellets were used in other. He described one shooting as a road-rage incident.

“We frankly don’t know if this is the result of one person or not,” he said.

Arizona state troopers spokesman Tim Case has acknowledged at least 11 confirmed shootings in and around I-10 in less than two weeks, not including what he called “numerous reports this morning of other vehicles with damage.”

“We’re out here to prevent someone from getting killed or hurt seriously,” Bolt, who says he founded the group five years ago, told CNN. “We’ve been fortunate so far … it’s only a matter of time.”

They say they are usually on foot patrol in areas where crime is high. While other people find satisfaction in bowling, reading or knitting, Bolt Force members say their interests lie in fighting crime. They do it on a volunteer basis. All of the members have other day jobs. And they say they are in contact with police.

When asked what they would do if they actually witnessed the freeway shooter, Bolt said: “First thing, we’re gonna call our Department of Public Safety contact immediately. And I guarantee you there’s gonna be people around here so fast you couldn’t even blink.”

Some people praise the effort. But law enforcement officers and the capital’s mayor worry that group members could be mistaken for snipers.

“We are not vigilantes,” Bolt said. “We’re an armed volunteer crime-fighting force. But we do not go above the law.”

DPS officials said they have been in contact with the group to make sure officers know where its members are.

Arizona’s DPS chief hasn’t yet called the spate of shootings a case of a serial sniper, which could imply someone staking out a perch to selectively target people. Nor have authorities given any indication that they have a suspect in mind.

But Col. Frank Milstead, the DPS director, has called tracking down the person responsible “job one,” a sentiment echoed by Arizona’s governor.

“This is our top priority in our administration,” Gov. Doug Ducey said. “I’d ask Arizonans to remain alert and aware. And we’re going to find who’s doing this and bring them to justice.”

New round of shootings after break

The first shootings were reported on August 29, when bullets hit three vehicles — an SUV, a commercial tour bus with no passengers, and a passenger car — as they traveled along I-10.

There were two more shootings over the subsequent two days, then a break until the shootings apparently resumed on Sunday. Since then, two box trucks, two pickups and a passenger car were struck, as well as a tractor trailer — the latest incident on Thursday morning.

Milstead said then that some of the motorists didn’t immediately realize their cars had been shot, thinking the loud noise they heard was an object on the highway that hit their vehicle.

Bullets struck seven of the vehicles. The others were hit by projectiles that authorities are still trying to specify.

The good news is that none of these shootings has been fatal. In fact, there’s been only one related injury: A 13-year-old girl whose right ear was cut late last month when a bullet pierced the windshield of the SUV in which she was riding.

But Milstead told CNN that luck may not hold out if this continues, which is why Gov. Ducey referenced the shootings while tweeting that “the safety of Arizonans is our number one priority.”

“All of these acts are potentially lethal encounters,” Milstead told CNN on Wednesday. “When you’re shooting into a moving vehicle with unwitting occupants, (it could be) lethal.”

Official: Find shooter ‘before someone is … killed’

Arthur Roderick, a former assistant director for the U.S. Marshals, noted the Phoenix shootings appear different from the October 2002 Washington-area sniper attacks that he helped investigate.

For one, the fact that multiple weapons are apparently being used in this case differs from the single gun in the Beltway sniper case. And the latest shootings are more localized and not across several states.

The more confined area could be a plus, with Roderick telling CNN, “They’re able to concentrate all their efforts in that one particular area.”

That’s what authorities are doing in Phoenix by utilizing state police, local departments’ SWAT teams, FBI resources and highway surveillance cameras to keep an eye on the area.

As to the motivation and who is responsible, Milstead said, “We don’t have a suspect in mind yet.”

“But we will find who this is. … And hopefully, we get to them before someone is seriously injured or killed.”