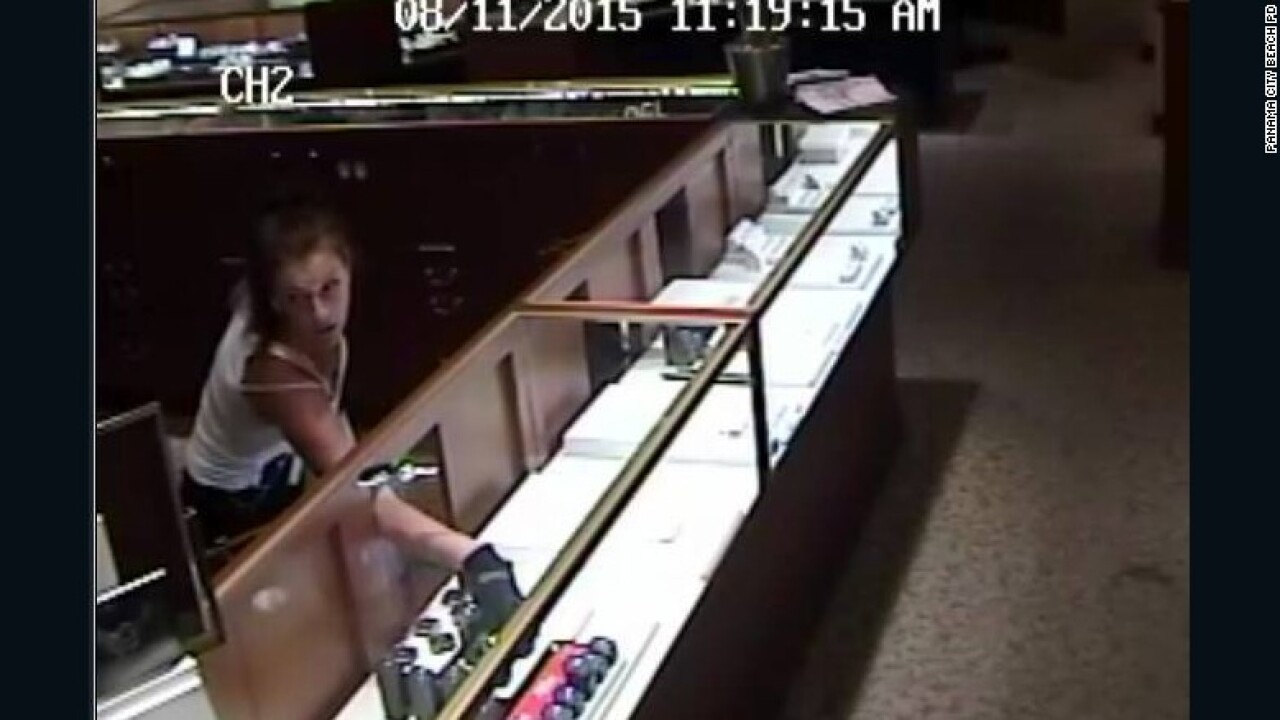 Police released this photo from the August 11 robbery of Reeds Jewelers in Panama City Beach, Florida.

The approaches are strikingly similar: Robber enters a jewelry store, whips out a gun and forces employees into the back before taking off with merchandise.

In each of three recent robberies, the thief was described as a woman who allegedly tied up store employees before loading up on valuables. The robberies occurred in three states, at three different franchises, between early August and early September.

Authorities in Georgia, South Carolina and Florida are investigating whether there are connections between the three.

Georgia: She had ‘masculine build’

The first robbery, on August 5, targeted a Zales store Dawsonville, Georgia, about 60 miles north of Atlanta.

The robber was a woman with a “masculine build,” said Tony Wooten, a spokesman for the Dawson County Sheriff’s Office.

She entered the store as soon as it opened in the morning, brandished a gun and made away with valuables worth an estimated $13,000, Wooten said.

“She forced employees to the back of the store, where she zip-tied their hands before robbing the Zales,” he said.

It appears she was acting alone, but authorities said they cannot rule out whether she had help.

She vanished into thin air, leaving authorities scrambling for clues.

About a week later, a woman robbed a Reeds store in Panama City Beach, on Florida’s Gulf Coast.

In this case, the haul was much larger: merchandise worth more than $400,000.

The robber “was armed with a small firearm, zip-tied the two female employees and ordered them into the restroom,” said Robert Clarkson of the Panama City Beach Police Department.

She then grabbed jewelry from the showcase boxes before taking off.

“The employee stated the suspect had entered the store one day prior to the robbery and asked about the same items,” Clarkson said.

The next incident occurred last week at a Jared store on the South Carolina coast, in Bluffton.

In this case, a female robber showed up with a black handgun and forced the employees to the back of the store, where she tied them up, said Capt. Bob Bromage, a spokesman for the Beaufort County Sheriff’s Department.

“The female then fled the store and is believed to have left in a vehicle, although this was not observed by the employees,” Bromage said.

The thief was described as wearing a blue or purple striped skirt, a lavender shirt and a black, brimmed hat, CNN affiliate WJCL reported.

Many similarities, many questions

Each of the three robberies involved a Caucasian woman acting alone, using a handgun and tying up employees before making off with merchandise, authorities said. In both the Georgia and Florida cases, local media reported that employees said the robber used zip-ties to bind them.

The choice of targets bore similarities, as well. All three were chain stores; two were located at outlet malls and the other at a large retail shopping/entertainment plaza.

So, key questions remain: Are the robberies connected? Were they carried out by the same person or was it a team? Or, is a copycat at work?

And most important: Will she — or they — strike again?