Nearly 19 months after it was crushed at the bottom of a giant sinkhole, the 1 millionth Corvette got its big reveal Thursday.

Fans at an unveiling ceremony at the National Corvette Museum in Bowling Green, Kentucky, said the irreplaceable white LT1 convertible roadster looked as new as it did when it came off the assembly line in 1992.

The revered “1-Millionth” was one of eight prized Corvettes swallowed by a demon of nature lurking underground.

In a predawn sneak attack, a previously unknown sinkhole, 40 feet wide and 30 feet deep, opened up inside the facility’s Skydome exhibit hall in February 2014.

Some of General Motors’ expert team of restoration experts who worked on the car were on hand for Thursday’s unveiling, honoring the model’s cultural legacy as the world’s longest-running continuously produced passenger car. The ‘Vette’s been in production since 1953.

Chevrolet, the GM company that makes the Corvette, said the 1 millionth was the most valuable of the three cars that experts deemed salvageable. Car and Driver listed its worth at $750,000 or more.

Restorers faced a dilemma for every damaged part on the car: Using replacement parts to repair the damage threatened to reduce the car’s overall historic significance. Choices about which original parts were too damaged to save were crucial.

One big surprise was restoration of the car’s crushed windshield header, which restorers had nearly written off as a loss at first. Other restored components include the red leather seats.

But sadly, many components had to be replaced, including:

The hood: It was one of the car’s hardest-hit parts.

The front fascia and lower panels between the front wheels and doors.

A unique “1,000,000th” windshield banner the car wore when it came off the assembly line. It was replaced with an exact replica, Chevy said, because the original computer graphics were still available.

Replacement parts came from a “vehicle of the same vintage and color, ensuring authenticity of the parts and materials involved with the restoration,” Chevrolet said. 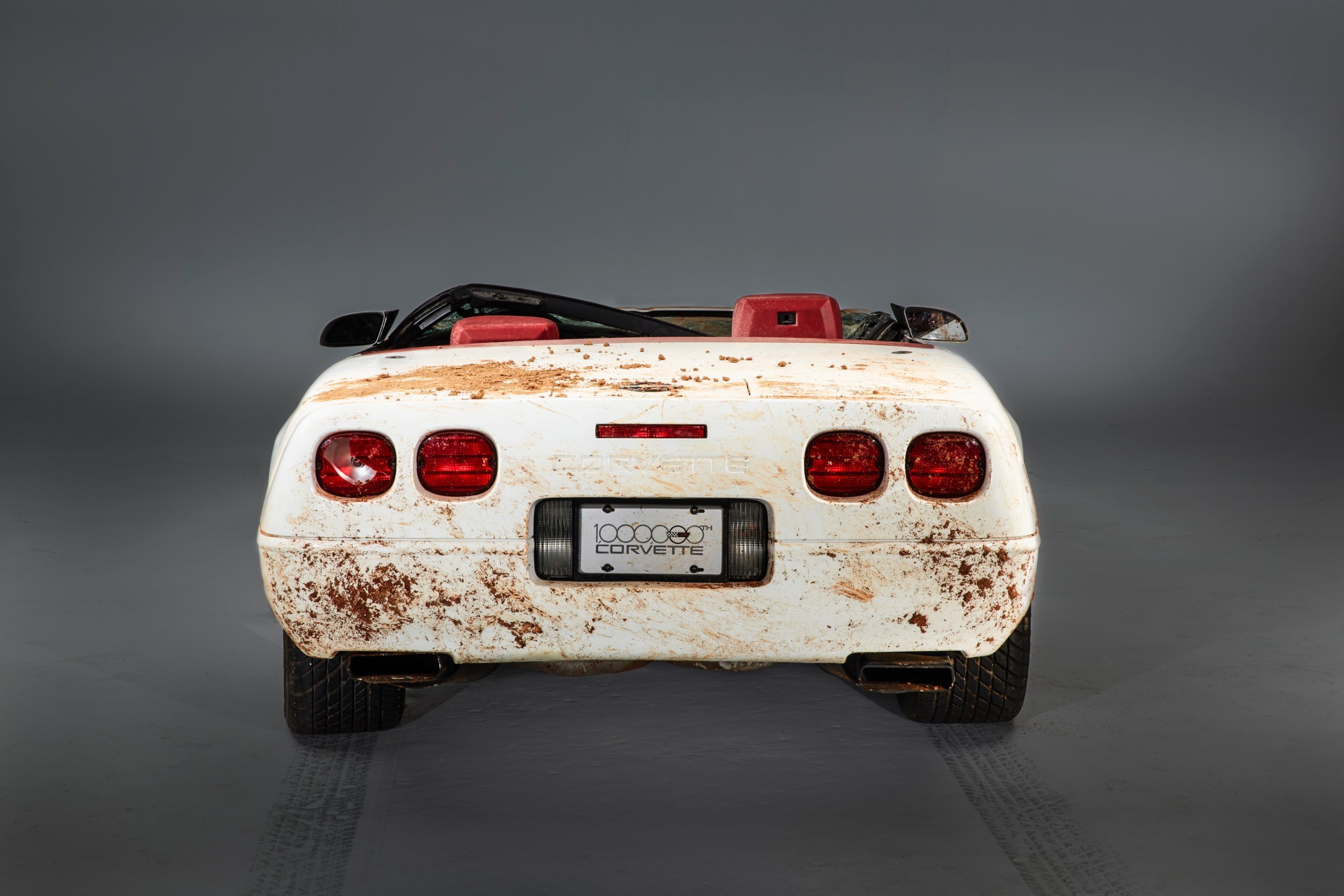 When restorers in Michigan began taking the car apart last April, they discovered a touching surprise. Surfaces underneath nearly every part were covered with signatures of Bowling Green assembly line workers from 1992.

Each signature amounted to a personal salute from one of hundreds of proud men and women, honoring their work and the museum piece they helped create.

The discovery doubled GM’s resolve to save as many of the signed parts of the car as possible.

Some parts that otherwise would have been replaced — like the rear fascia and front exhaust system — were repaired instead, as a way to save the signatures on them.

Only two signed components couldn’t be saved. Those autographs were scanned, reproduced and transferred onto the replacement parts, Chevrolet said.

Restorers found no signatures under the front bumper cover.

One more restoration to go

Two other sinkhole ‘Vettes were salvageable: a 2009 ZR1 Blue Devil, which was restored last year, and a 1962 tuxedo black convertible.

The unveiling also celebrated the reopening of the scene of the crime: the museum’s Skydome. Its round, bright yellow facade and 11-story red spire have become an iconic milestone for travelers driving through Bowling Green along nearby Interstate 65.

Later this year, the museum plans to open a new interactive exhibit called “Corvette Cave In: The Skydome Sinkhole Experience.” The exhibit will document the disaster with a scientific explanation of the sinkhole, remnants of the wrecked cars and examples of the worldwide media coverage.