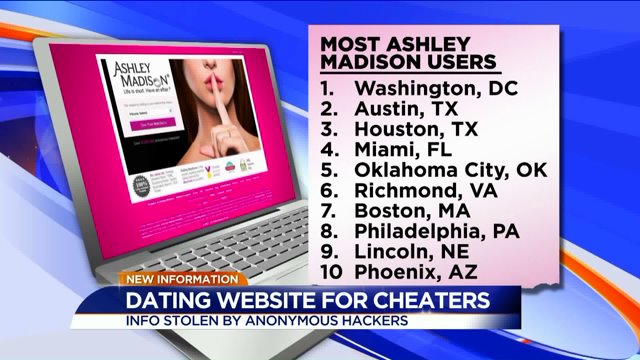 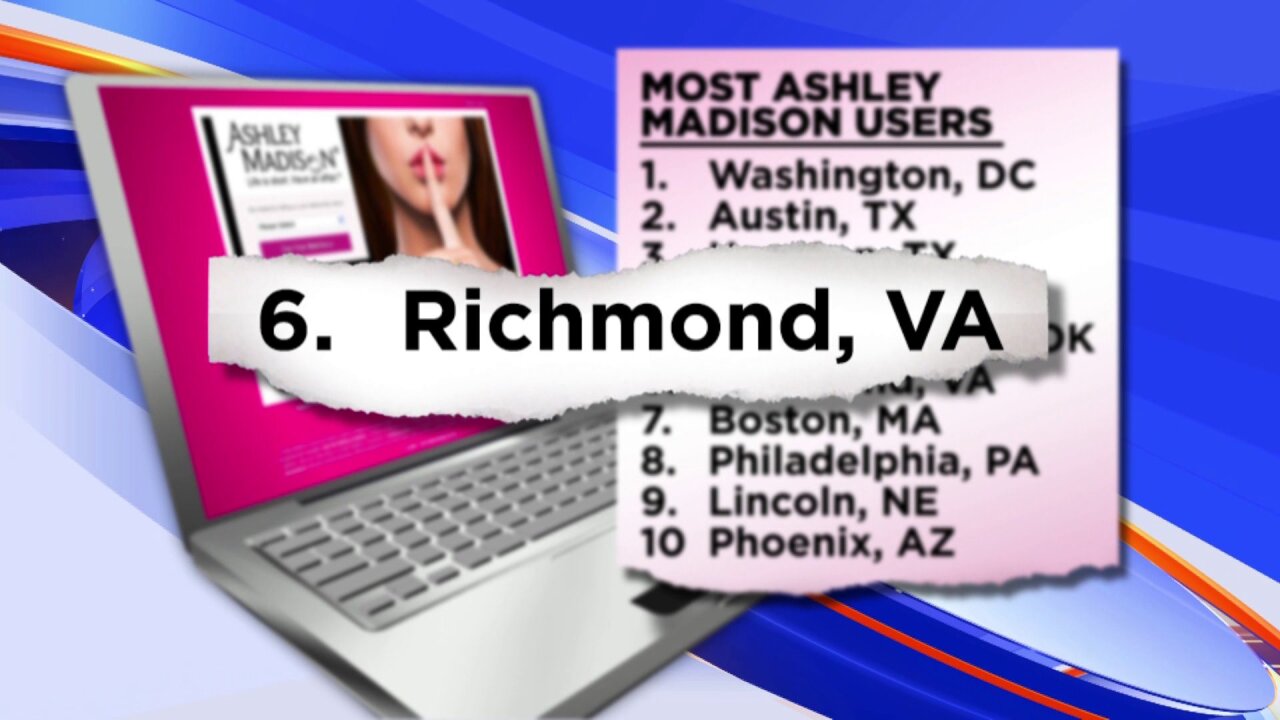 RICHMOND, Va. -- A dating website that helps married people cheat has been hit by hackers who are reportedly threatening to release data about millions of customers. Ashley Madison, which uses the advertising slogan "Life is short. Have an affair," said Monday it had been attacked but did not say which data had been compromised.

The hackers are demanding that the site be permanently shut down or that the names of those who have used the site will be released.

And that means several Richmonders could be impacted. According to a 2013 survey, Richmond ranked sixth as having the most users of the service.

“We apologize for this unprovoked and criminal intrusion into our customers’ information,” Avid Life Media Inc. officials wrote.

Brian Krebs, the blogger behind Krebs on Security, first reported the breach late on Sunday. Krebs said the hackers have already posted some data stolen from Ashley Madison, and are threatening to release all customer records if their demands are not met.

"We were recently made aware of an attempt by an unauthorized party to gain access to our systems," Avid Life Media, the parent company of Ashley Madison, said in a statement. The company said that while it had stringent security measure in place, they "have unfortunately not prevented this attack."

"At this time, we have been able to secure our sites, and close the unauthorized access points," company said. "We are working with law enforcement agencies, which are investigating this criminal act."

Ashley Madison is a dating website, with one important twist: Instead of connecting eligible singles, it caters to married people interested in conducting affairs. The site claims to have 37 million members, and has in the past bragged about its data security.

The site is an obvious target for hackers. After all, its databases have enormous potential for use in blackmail schemes.

The hackers -- or hacker, perhaps -- appear to be upset over the company's "full delete" service, which promises to completely erase a user's profile, and all associated data, for a $19 fee.

"Full Delete netted [Avid Life Media] $1.7 million in revenue in 2014. It's also a complete lie," the hackers were quoted as saying in a manifesto published by Krebs. "Users almost always pay with credit card; their purchase details are not removed as promised, and include real names and address, which is of course the most important information the users want removed."

The hackers called themselves the "Impact Team." If Ashley Madison is not taken offline, they have threatened to "release customer records, including profiles with all the customers' secret sexual fantasies and matching credit card transactions, real names and addresses, and employee documents and emails."

"Some people just aren't going to be faithful no matter who they are married too," said Ruth McMahon, owner of local shop Kiss and Makeup Lingerie.

McMahon said no one should be surprised with the numbers and that many couples forget to fan the flame.

"My really good customers  are the ones that are making an effort to make their spouse happy," McMahon said. "If people make an effort for romance in their marriage they have a better chance for things succeeding."

Security experts say not only could relationships be destroyed if the customer database gets out, but identities could be stolen too. The hackers apparently have credit card numbers.

"You've got to expect that the security for these social media sites aren't as tough as the Pentagon," VCU Social Media professor Marcus Messner said.

It remains unclear how many Richmonders would be impacted.

As far as who is likely to cheat? The American Sociological Review reports that men who are married to female breadwinners are most likely to stray.

The hack follows a similar event in March, when more than 3.5 million people's sexual preferences, fetishes and secrets were exposed after dating site Adult FriendFinder was hacked.

Adult FriendFinder, which boasts 64 million members, claims to have "helped millions of people find traditional partners, swinger groups, threesomes, and a variety of other alternative partners."

Included in the exposed personal information are customers' email addresses, usernames, passwords, birthdays and zip codes, in addition to their sexual preferences.