“I have directed the FBI to take the lead in the national security investigation of this heinous attack on members of our military,” U.S. Attorney General Loretta Lynch said, calling the shooting “a shameful and cowardly act of violence.”

A key detail will help them make that determination: finding out the suspect’s motive.

In the neighborhood where Abdulazeez is believed to have lived, police cars and an ambulance were on the streets. Residents were blocked from reaching their homes.

“We will treat this as a terrorism investigation until it can be determined that it is not,” Reinhold said. U.S. Attorney Bill Killian earlier told reporters that authorities were treating the shooting as an “act of domestic terrorism.”

The shootings unfolded at two sites over 30 minutes, Reinhold said.

The suspected gunman started spraying bullets at the glass doors of a strip mall military recruiting center around 10:45 a.m. ET, witnesses said. From there, he headed to another location more than seven miles away, an operational support center operated by the U.S. Navy. That’s where the four victims and the gunman were killed, Reinhold said.

At least three people were injured, officials said, including a police officer and a military service member.

The officer, who was injured when he was shot in the ankle, has been treated at the hospital, Chattanooga Mayor Andy Berke said. A military service member was also among the wounded, the Defense Department said. 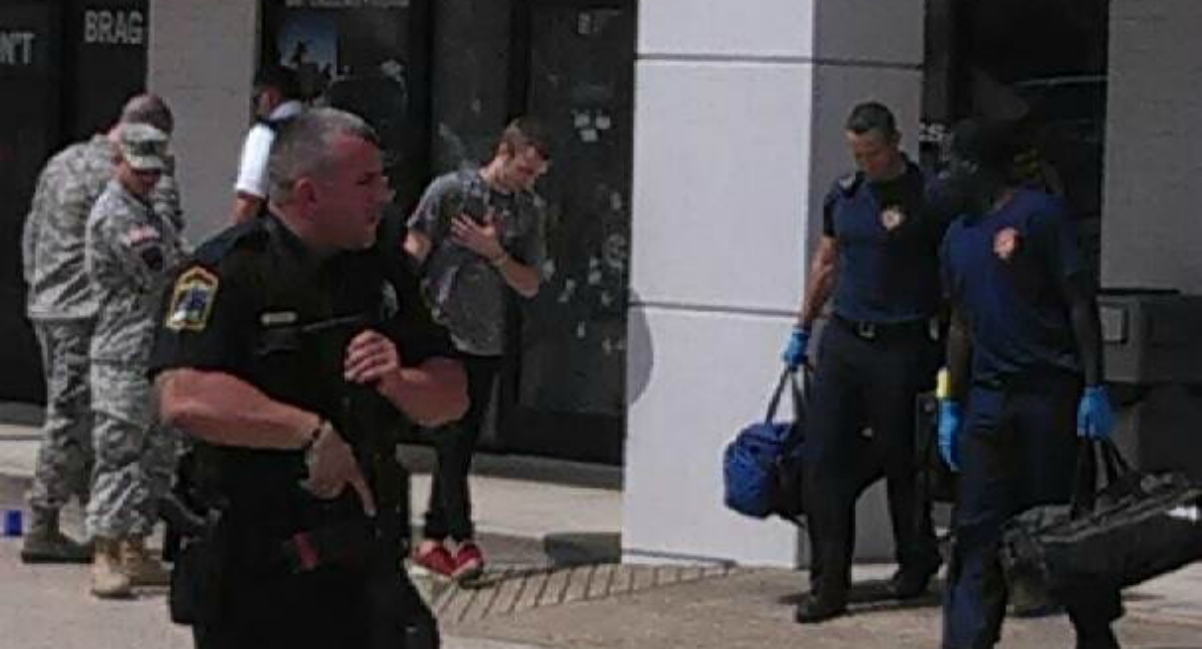 What was security situation?

“Today was a nightmare for the city of Chattanooga. … We had someone viciously attack, at two different locations, people who proudly serve our country,” Berke said.

The shootings raised questions about the security at the military centers. Authorities haven’t released details yet about where at the centers the victims were killed or how the gunman gained access.

U.S. President Barack Obama said the FBI director had briefed him on the shootings.

“We take all shootings very seriously. Obviously when you have an attack on a U.S. military facility, then we have to make sure that we have all the information necessary to make an assessment in terms of how this attack took place and what further precautions we can take in the future,” he said, vowing that the investigation would be “thorough and prompt.”

‘It was very loud and very fast’

Gina Mule, a server at a restaurant, said she saw a man who’d been in a silver convertible Mustang, firing a “high-powered rifle” at the recruiting offices at about 10:50 a.m.

She said she first heard “Pow, pow, pow!” She then went to a window, through which she said she saw the man firing shots.

“I don’t know how many shots he fired, but it was a lot,” she said.

A second witness, April Grimmett, said she was working at a hair salon near the recruiting center when she looked out a window and saw a man ducking in between cars.

“Shortly after that, we heard the (shots). It was very loud and very fast,” Grimmett said, without saying what happened to the man she had seen.

A photo that she took shows glass doors damaged by the gunfire.

“I could not believe how many bullet holes were in that door. It was insane,” she said.

Fred Wright, a salesman at a nearby auto parts store, told CNN that after he heard gunshots, three people ran into the shop, hollering they thought “someone was shooting at them.”

“Sounded like it was 30, 40 shots to me,” Wright said, adding that he never saw a shooter.