PLATTSBURGH, N.Y. — A second prison employee has been charged in connection with the stunning escape of two convicted murderers from a maximum-security facility in upstate New York this month.

Officer Gene Palmer, a longtime prison guard, gave at least one of the inmates a screwdriver and needle-nosed pliers to help fix electrical breakers in the catwalk area behind their cells, an official familiar with the investigation told CNN on Wednesday.

Palmer, 57, told investigators he supervised Richard Matt and David Sweat doing the work and took the tools back before the end of his shift, the official said. Authorities have said that Matt and Sweat, who are still on the lam, used the catwalks during their elaborate June 6 escape from the Clinton Correctional Facility in Dannemora.

The tools were found at Palmer’s home after police executed a search warrant, the official added.

Palmer posted bail of $25,000 and was released from jail early Thursday.

“Mr. Palmer has been completely cooperative with the investigation,” Brockway said. “He will continue to cooperate. He’s a man of integrity who made some mistakes.”

Palmer also accepted paintings from Matt and Sweat, according to a document detailing the charges against him. After the convicts escaped, he tried to destroy evidence of the paintings, burning some of them in a fire pit at his home and burying others in nearby woods, the document said.

In all, he faces three felony charges — one count of promoting prison contraband and two counts of tampering with physical evidence — and one misdemeanor charge of official misconduct.

Palmer, who has worked at the prison for 27 years and is now on paid leave, took frozen meat embedded with smuggled tools to the inmates’ cell area, Clinton County District Attorney Andrew Wylie said Wednesday.

Joyce Mitchell, a supervisor in the prison’s tailor shop, smuggled the tool-laced meat through the main gate at the prison and placed it in a freezer in the tailor shop, according to Wylie. She then asked Palmer to take the meat to the inmates’ cell area in the honor block, the prosecutor said.

Mitchell, who has pleaded not guilty to charges of aiding the escapees, admitted to putting hacksaw blades and drill bits into a hunk of hamburger meat, according to Wylie.

Palmer could have put the meat through a metal detector, but he didn’t, which was a violation of prison policy, the prosecutor said.

Mitchell, 51, did not have access to the cells, which is why she needed Palmer to hand it off, according to Wylie.

Mitchell’s attorney, Steve Johnston, declined Wednesday to comment on what his client might have admitted to, telling CNN he didn’t want to be “in a position of harming her plea-bargaining opportunities.”

Brockway has said Palmer was unaware the meat contained contraband.

“He understands that he made a mistake with the whole meat fiasco,” he said. The meat incident wasn’t mentioned Wednesday in the document detailing the charges against Palmer.

Palmer described life as a prison guard as being as miserable as the lives of the prisoners themselves. “With the money that they pay you, you’ll go bald, you’ll have high blood pressure, you’ll become an alcoholic, you’ll divorce, and then you’ll kill yourself,” he said.

And in an ominous twist, Mann revealed his foreboding thoughts about the jail all those years ago. “Everywhere we go, prisoners are handling knives and power tools,” he said. “Even then, that detail kind of freaked me out.”

Killers spend birthdays on the run

The prison guard’s arrest came as more than a dozen investigators from the New York State inspector general’s office arrived at the prison to investigate possible breaches of security protocols that allowed Matt and Sweat to escape, a state law enforcement official said.

Investigators are going through visitor logs and documents related to prisoner and employee movements at the jail, the official said.

As authorities try to figure out what went wrong at the prison, hundreds of law enforcement officers are still rummaging through dense woodland surrounding a hunting cabin the fugitives are believed to have burglarized. Authorities said a number of items were recovered from the Mountain View cabin, some 30 miles west of the jail, including a sock, according to Wylie. While the district attorney wouldn’t say if the sock’s red markings were blood, he did tell CNN’s Anderson Cooper, “I do know that a DNA profile was from one of the socks.”

The sprawling manhunt has now stretched into its 20th day — long enough for both escapees to spend their birthdays on the run. Sweat turned 35 on June 14, while Matt hit 49 on Thursday, according to the birth dates for the two men provided by the U.S. Marshals Service.

The 75-square-mile primary search area is roughly 20 miles west of the prison. State forest rangers describe the terrain as treacherous, not just for the escapees but for police and other searchers, too.

“The area is heavily forested. The undergrowth is thick,” Capt. John Strife said. “The vegetation is a combination of trees, saplings and brush.” 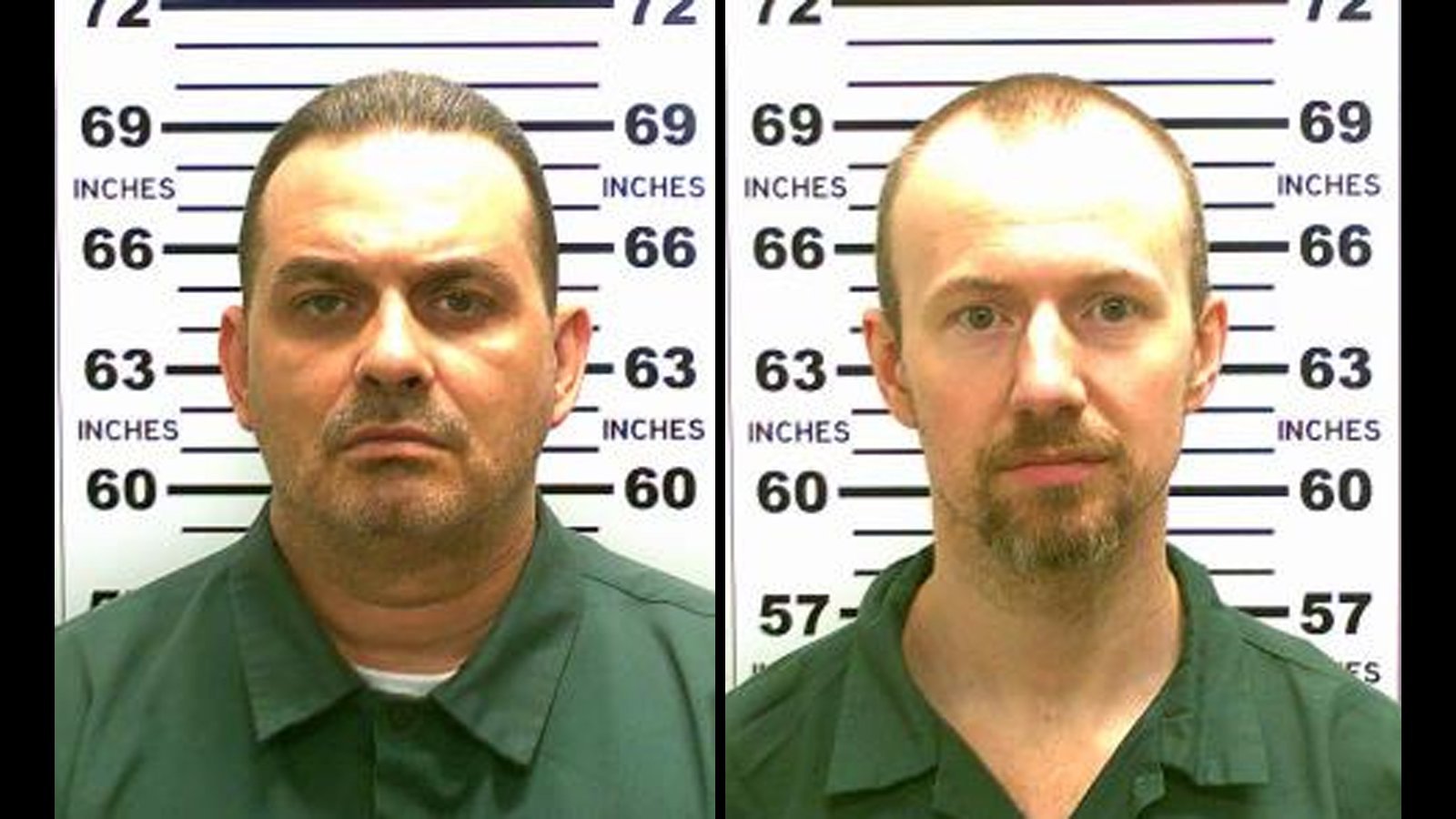