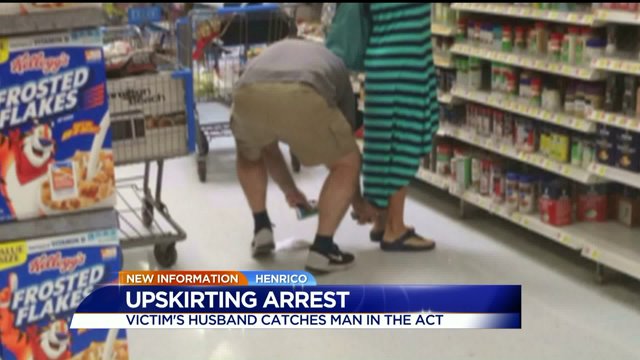 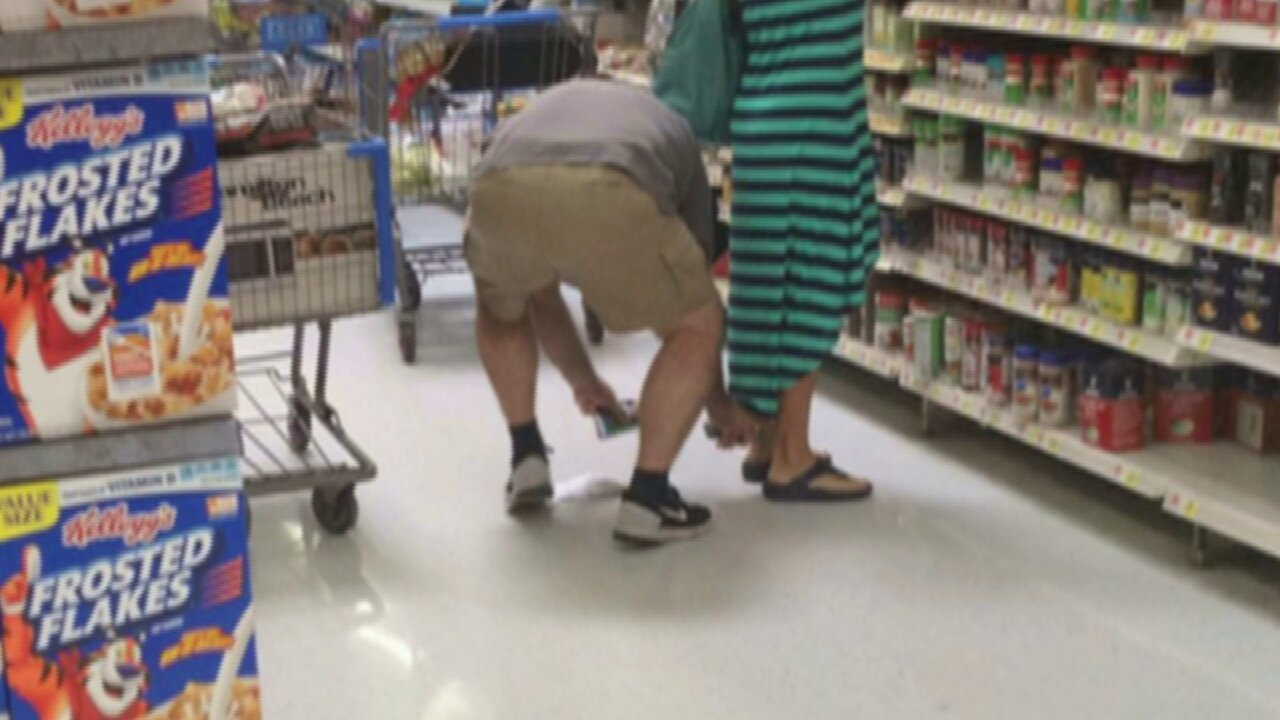 HENRICO COUNTY, Va. -- A photo obtained by WTVR CBS 6 News allegedly showed John Wiggins, 55,  using a cellphone camera to snap photos up a woman's dress at the Walmart in Short Pump. That picture was taken by the husband of another woman who claimed she was also one of Wiggins's victims.

Henrico Police arrested Wiggins after he allegedly violated two women by using his smart phone to snap pictures under their skirts on Sunday, May 31. Officers said one victim became very uneasy when he  bumped into her in the middle of the store and pretended to drop something in the store.

The woman whose husband snapped the photo spoke to WTVR CBS 6 reporter Joe St. George on the condition of anonymity Wednesday.

So how did it happen? The woman said Wiggins dropped a box of pasta on the floor as a distraction – and as an excuse for him to reach down to get closer to the floor and into the perfect spot to snap a pic.

"It started in the shampoo department and that's when it happened the first time," she explained. "I just turned the aisle and he looked directly at me and I felt his guilt."

After the ordeal, the woman said her husband decided to follow Wiggins around Walmart to try to catch him in the act.

That's when he snapped the photo of a woman in a green and blue striped dress wearing flip-flops reaching for an item in the spice section.  That photo also captured the suspect squatting down to lower what appears to be a cellphone under her dress.

The victim said the incident caused her to change her shopping routine.

“I definitely haven't worn a dress out shopping -- and I don't know when I'll do that again,” she said.

WTVR CBS 6 has learned from students at Clover Hill High School that Wiggins worked at the school as a teacher's aide.

"He didn't really say much, he would just sit in the back," said Jayla Boyd, a student at Clover Hill High.

Boyd said Wiggins appeared in her social studies class and that at one time he coached wrestling.

"He doesn't need to be around children at all," Tamara Wynn, a Clover Hill parent said. "He needs to get some help,"

Support for the Suspect

Wiggins does have a number of supporters reaching out to on Facebook who said he is good guy and that they stand by him. As for the Wiggins family, the suspect’s daughter emailed WTVR CBS 6  about the allegations.

"My dad is obviously struggling with mental illness. My family and I are being affected greatly by this situation,” she wrote. Wiggins's two counts of “upskirting” are misdemeanors.