State of emergency declared in Baltimore

BALTIMORE, Md. -- Authorities say about 1,500 members of the National Guard have been deployed to Baltimore to help the city deal with rioting and looting. "We're bringing as many as we possibly can," Col. William Pallozzi said at a news conference on Monday.

Up to 5,000 law enforcement officials will be requested from the mid-Atlantic region to help quell the violence in Baltimore, Col. William Pallozzi of the Maryland State Police said at a press conference on Monday. Maryland Gov. Larry Hogan declared a state of emergency after rioting broke out in Baltimore on Monday.

Six Baltimore police officers have been seriously injured in Monday's violence, Police Commissioner Anthony Batts said. He said many of the instigators appeared to be high school students.

"I think they thought it was cute to throw cinder blocks at police," Batts said.

Meanwhile, several street fires and car fires continued burning late into the night as sirens blared nonstop in the city.

State and national leaders were weighing in on the violence in Baltimore late Monday.

"Today's looting and acts of violence in Baltimore will not be tolerated. In response, I have put the Maryland National Guard on alert so they can be in position to deploy rapidly as needed," said Maryland Gov. Larry Hogan.

"There is a significant difference between protesting and violence, and those committing these acts will be prosecuted under the fullest extent of the law," the governor added.

Separately, President Barack Obama met with newly sworn in Attorney General Loretta Lynch at the White House, just hours after she was sworn in.

Attorney General Lynch assured the President that she would continue to monitor events in Baltimore and that the Department of Justice stands ready to provide any assistance that might be helpful there," said a statement from the White House. "Earlier today, the President also spoke with Mayor Stephanie Rawlings-Blake about the ongoing situation in Baltimore."

The family of Freddie Gray condemned violence that spread across the city of Baltimore after his funeral on Monday.

"I want y'all to get justice for my son, but don't do it like this here," his mother told journalists.

"I don't think that's for Freddie," his twin sister Fredericka Gray said of the rioting. "I think the violence is wrong."

The Baltimore Orioles have postponed their home game against the Chicago White Sox on Monday, the team announced via Twitter. At first, the team planned to go ahead with the game, but delayed it after further talks with the Police Department. A make-up date for the game will be announced later.

A riot erupted on the streets of Baltimore late Monday as protesters clashed with police, several of whom were injured.

"This afternoon, a group of outrageous criminals attacked our officers. Right now, we have seven officers that have serious injuries, including broken bones, and one officer who is unconscious," Capt. Eric Kowalczyk told reporters.

He vowed to find the attackers and put them in jail.

Video showed police in riot gear taking cover behind an armored vehicle, as protesters pelted them with rocks.

At one point, it looked like officers used tear gas. The Baltimore Police Department said it had heard reports of protesters setting small items on fire, and footage showed a cruiser in flames.

There were no immediate reports of injuries among the protesters.

Earlier in the day, the Baltimore Police Department said it had received a "credible threat" that gangs were teaming up to "take out" officers.

It did not say where the information came from, nor did it say whether the threat was tied to the recent death of Freddie Gray. Gray died in police custody under circumstances that remain unclear.

His death has sparked ongoing protests in Baltimore and raised long-simmering tensions between police and residents there.

"The Baltimore Police Department/Criminal Intelligence Unit has received credible information that members of various gangs including the Black Guerilla Family, Bloods, and Crips have entered into a partnership to 'take out' law enforcement officers," police said. "This is a credible threat."

Maryland State Police have ordered an additional 40 troopers to Baltimore to join the 42 troopers already sent there Monday afternoon to assist city police.

Since last Thursday, more than 280 state troopers have provided assistance in Baltimore.

'They don't deserve this'

Monday's violence came the same day as Gray's funeral. The 25-year-old was arrested on April 12 and died one week later from a fatal spinal cord injury.

"I am sure that the family is concerned, and I am positive that they are against what is beginning to develop here in town," said Billy Murphy, an attorney for the Gray family.

"They don't deserve this any more than Freddie Gray deserved it," he said about the injured officers.

In spite of the violence, the Baltimore Orioles say the baseball team has consulted with Baltimore police, and plans to play Monday night's home game against the Chicago White Sox as scheduled, a source with knowledge of the situation told CNN Sports.

Over the weekend, a few protesters vandalized police cars, threw objects at officers, cursed at them and scuffled with them.

About a dozen young men smashed squad cars with garbage cans, climbed on top of them and stomped on them, CNN video showed.

1:42 p.m. -- The casket holding Freddie Gray's body is loaded onto the hearse.

3:00 p.m. -- A so-called flier from a local high school says that a "purge" is scheduled to start, according to the Baltimore Sun. The film "The Purge" is about a dystopian society in which crime is low in the United States because all laws are suspended for one 24-hour period every year.

3:30 p.m. -- Dozens of police can be seen gathered on the streets of Baltimore.

3:41 p.m. -- CNN reports that protesters are beginning to throw bottles at police officers and journalists.

3:51 p.m. -- Helicopter footage from CNN affiliate WJLA captures white smoke billowing up from the street. Neill Franklin, a former Maryland state police officer, tells CNN "it's like the perfect place for something like this to occur."

4:29 p.m. -- Baltimore Police tweet out first reports of bottles and bricks being thrown at officers.

6:19 p.m. -- The gates at Camden Yards, home of Major League Baseball's Baltimore Orioles, can be seen being closed.

6:47 p.m. -- Gov. Larry Hogan's office announces that all previously scheduled events on his calendar on Tuesday will be canceled.

6:50 p.m. -- A man can be seen on CNN stabbing a hose that firefighters are trying to use.

7:01 p.m. -- Gov. Larry Hogan's office announces that he has declared a state of emergency and will active the National Guard to address the unrest in Baltimore.

7:58 p.m. -- Baltimore Mayor Stephanie Rawlings-Blake announces that a citywide, nightly curfew will be imposed starting Tuesday from 10 p.m. to 5 a.m. It will be in effect for one week, Rawlings-Blake said at a press conference.

8:51 p.m. -- Col. William Pallozzi of the Maryland State Police announces that up to 5,000 law enforcement officials will be requested from the mid-Atlantic region to help quell the violence in Baltimore.

9:23 p.m. -- Public schools will be closed on Tuesday in Baltimore, a city official says. 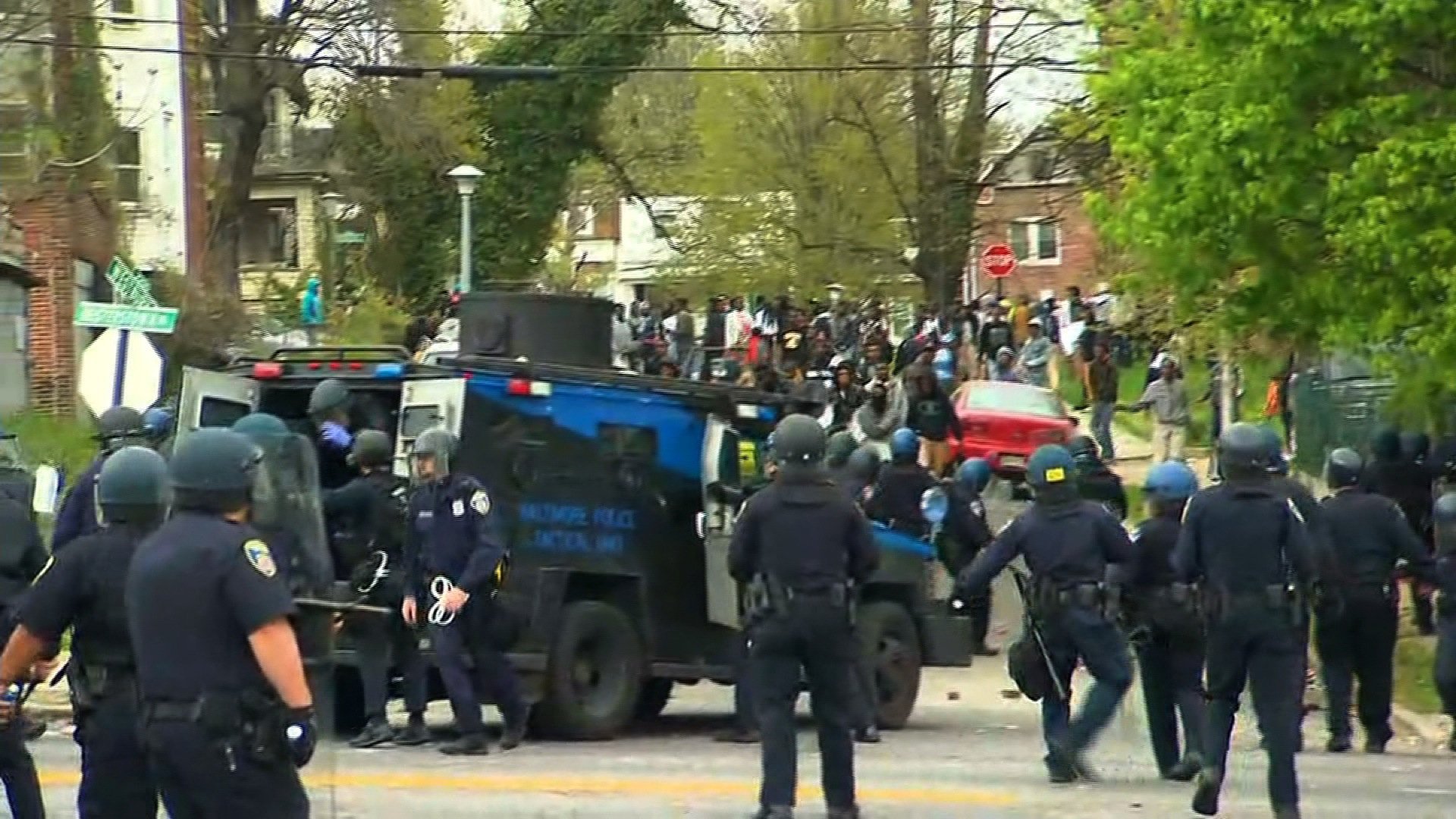