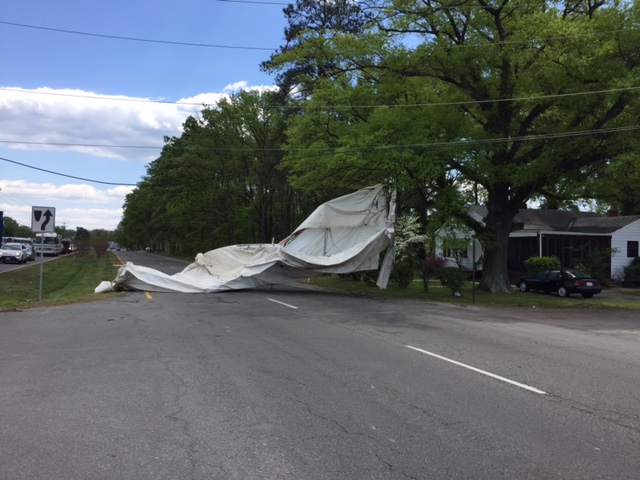 HENRICO COUNTY, Va. — One person suffered minor injuries when the wind lifted a large canopy from a vendor’s tent into the air near Richmond International Raceway Thursday and struck a person in the head, according to Henrico Fire spokesman Capt. Danny Rosenbaum. The injured person was taken to Bon Secours Memorial Regional Medical Center in Mechanicsville. Henrico Police spokesman Lt. Chris Eley said that initial reports indicated the canopy was blown over by high winds.

When the tent went airborne, it ended up striking power lines next to Laburnum Avenue, which briefly disrupted power to RIR.

One woman who witnessed what happened said a child was almost seriously hurt.

“There was a little boy in a little wagon with his mom and dad – and he was going up with the wind,” Heather McIntosh said. “The tent was going up, the kid was going up. And his father actually saved him. He grabbed him… and he took him out.”

CBS 6 Weather Authority Meteorologist Mike Stone said that winds in the area ranged from 20 to 30 mph between noon and 1 p.m.

A Henrico County building inspector responded to the scene to check if other tents and canopies in and around the track were safe from the wind.

For a time, the incident had closed Laburnum Avenue between the Richmond-Henrico Turnpike and Carolina Avenue.