People with Down syndrome sit for stunning portraits

(CNN) — Icelandic photographer Sigga Ella wanted to show that people with Down syndrome are more than a chromosomal abnormality. They are diverse and they’re unique, just like everyone else in the world.

Ella’s series, “First and foremost I am,” consists of 21 portraits of people ranging from 9 months to 60 years old. She chose the number 21 to represent chromosome 21, the location of the most common genetic mutation causing the condition. It is currently on exhibit at the Reykjavík Museum of Photography and will be featured in May at the Warsaw Festival of Art Photography.

Ella shot the photos in 2013 and 2014 as part of a final project at The School of Photography in Reykjavik. She recently shared the images with CNN iReport.

The inspiration started with a radio interview Ella heard in which people were discussing ethical questions brought up by prenatal tests to detect birth defects. She hopes her photos shine a light on “the beauty and diversity of mankind” and make us wonder if a future without that diversity is desirable.

“I am not against prenatal/genetic testing for abnormalities but I think we need to stop and think what’s next. … It’s necessary to open the discussion and educate people more about Down syndrome. It’s not a disease or a flaw. Parents of children with Down syndrome … wouldn’t exchange them for anything in the world.” 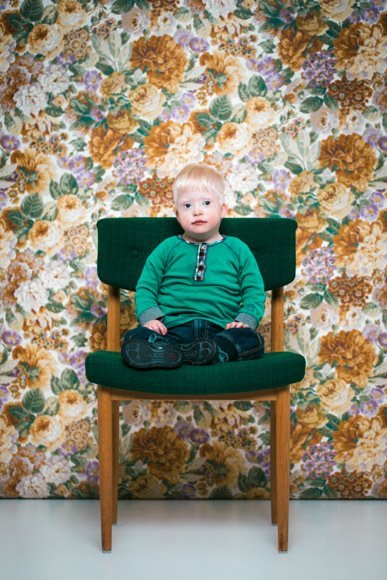 The title of the series, “First and foremost I am,” comes from a newspaper article by Halldora Jonsdottir, a 30-year-old woman who is also featured in Ella’s project.

“I have Down syndrome but FIRST AND FOREMOST I AM Halldora,” Jonsdottir writes. “I do a million things that other people do. My life is meaningful and good because I choose to be positive and see the good things in life. I go to work, attend school and have hobbies.”

Jonsdottir goes on to say, “Who is perfect? Who can say, that we who have Down syndrome are worth less that anyone else? We are all different and would it be so great if we were all alike?”

Ella staged the portraits against a floral background because she wanted the subjects “to stand out but also underline that all kinds of flowers can grow and flourish together.” The photo shoots lasted from one to three hours. She said she didn’t give any coaching or direction for how they should pose; she just talked with them and waited for the right moment to shoot.

“My favorite part of this project was how relaxed the atmosphere was. No one was pretending to be anything, the emotions were real and some of the times, there was such genuine happiness.”