BOSTON — Federal prosecutors ended their case against Dzhokhar Tsarnaev on Monday with disturbing, unforgettable images and testimony detailing the damage homemade bombs made from pressure cookers, fireworks and BBs do to human beings.

The government’s 91st and final witness was Boston chief medical examiner Henry Neilds, who described the horrific injuries that killed Martin Richard, one of three people who died near the finish line at the 2013 Boston Marathon.

The final words in the prosecution’s case came when Neilds was asked to tell jurors Martin’s age:

Neilds told jurors Martin’s spine was severed and his internal organs were ruptured, severed and exposed. His left arm was torn off, and he had third-degree burns.

Earlier in the trial, jurors heard Bill Richard describe his son’s final minutes and the heartbreaking choice he faced as a father.

Martin’s body had been torn apart. His skin had changed color. A crowd hovered over him, frantically trying to help, but he was dying.

“I knew in my head that I needed to act quickly, or we might not only lose Martin,” he said. “We might lose Jane, too.”

Moments after the blast, Richard had stumbled toward Jane, his 7-year-old daughter. His pants and sneakers were torn apart. His legs felt like they were on fire. He could barely hear. And the air smelled “vile,” he said, like gunpowder, sulfur and burned hair. But he soon realized the situation was much worse for his daughter.

“She tried to get up and she fell. That was when I noticed her leg,” he said. “She didn’t have it. It was blown off.”

So Richard left one son to die and shielded his other son’s eyes from the carnage as they raced to the hospital, hoping that doctors could save his daughter’s life.

“It was the last time I saw my son alive — barely.”

Martin Richard and Lingzi Lu, a 23-year-old grad student, were killed by the second of two explosions at the marathon.

Krystle Campbell, a 29-year-old restaurant manager, was killed by the first blast. She was standing in front of Marathon Sports on Boylston Street near the finish line and was killed by a bomb left on the sidewalk by the defendant’s older brother, Tamerlan Tsarnaev.

Several jurors cried and others appeared upset as they were shown graphic photos of Campbell during the closing minutes of court last week.

Photos and security surveillance videos introduced during the trial show Dzhokhar Tsarnaev sliding a backpack containing a pressure cooker bomb off his shoulder near the Forum restaurant, a block away. That explosion, 12 seconds after the first, killed Martin and Lu.

Earlier Monday, jurors heard from Katherine Lindstrom, who performed the autopsy on Lu for the Boston medical examiner’s office.

Lu’s thighs were perforated by debris spewed from the blast, Lindstrom said. She found two shards of metal in Lu’s legs, and a third, larger piece that slashed into her leather purse.

Metal and other debris, including pellets and small nails, were embedded in Lu’s body. The gashes were “perforating,” meaning they went completely though, Lindstrom said.

The skin from Lu’s left thigh was torn away, and the femoral artery and vein were severed, causing her to bleed to death on the sidewalk “relatively quickly, from seconds to minutes.”

Lindstrom was shown a series of graphic photos, and described the injuries she saw as “gaping,” “slashes” and “cavities in the muscle.”

“In her left thigh you see a large tear through her skin and muscle. It leaves a large hole that goes completely through her thigh.”

Jennifer Hammers, who performed the autopsy on Campbell, said Thursday her death was a homicide caused by blast injuries to the legs and torso. She said it probably took less than a minute for Campbell to bleed to death on the sidewalk.

Hammers went on to explain how the homemade bombs maim and kill and to provide the gruesome details of the damage done to Campbell’s body. The initial injuries came as a result of a shock wave from the blast: Campbell’s tongue was bruised from being forced against her teeth, the femur of her left leg snapped and the bones in her left foot were crushed.

“The seams of her blue jeans were pressed into her body with such force, they caused bruising,” Hammers said.

Other injuries were caused by bomb materials and debris sent flying through the air. Campbell’s hair was singed, the skin on the back of her neck was abraded, and she had a large third-degree burn on her back. The top of her right arm was burned.

She had “big, gaping holes in her legs,” Hammers said. The gashes were as large as 10 inches.

A pellet the size of a BB was embedded in her ear, and other BBs and metal fragments were found in wounds that penetrated her muscles. BBs also riddled her clothes.

“Miss Campbell passed away because she lost a significant amount of blood in a short period of time,” Hammers said.

Beyond the clinical details of what happened to Campbell’s body, jurors also have heard from a friend, who described what must have been the last minute of Campbell’s life.

Karen Rand McWatters, whose leg was so mangled it had to be amputated, dragged herself to Campbell’s side:

“I got as close as I could to her. There was so much chaos and so much screaming. For some reason, I got close to her head, and we put our faces together. I never really looked at Krystle’s injuries. She very slowly said her legs hurt and we held hands. Very shortly after, her hand went limp and we never spoke again.”

Prosecutors say the disturbing evidence is needed to prove several of the counts against Tsarnaev: using a weapon of mass destruction, bombing a public place and malicious destruction of property resulting in death.

Monday is the 15th day of testimony in the trial, which opened March 4 after lengthy jury selection. 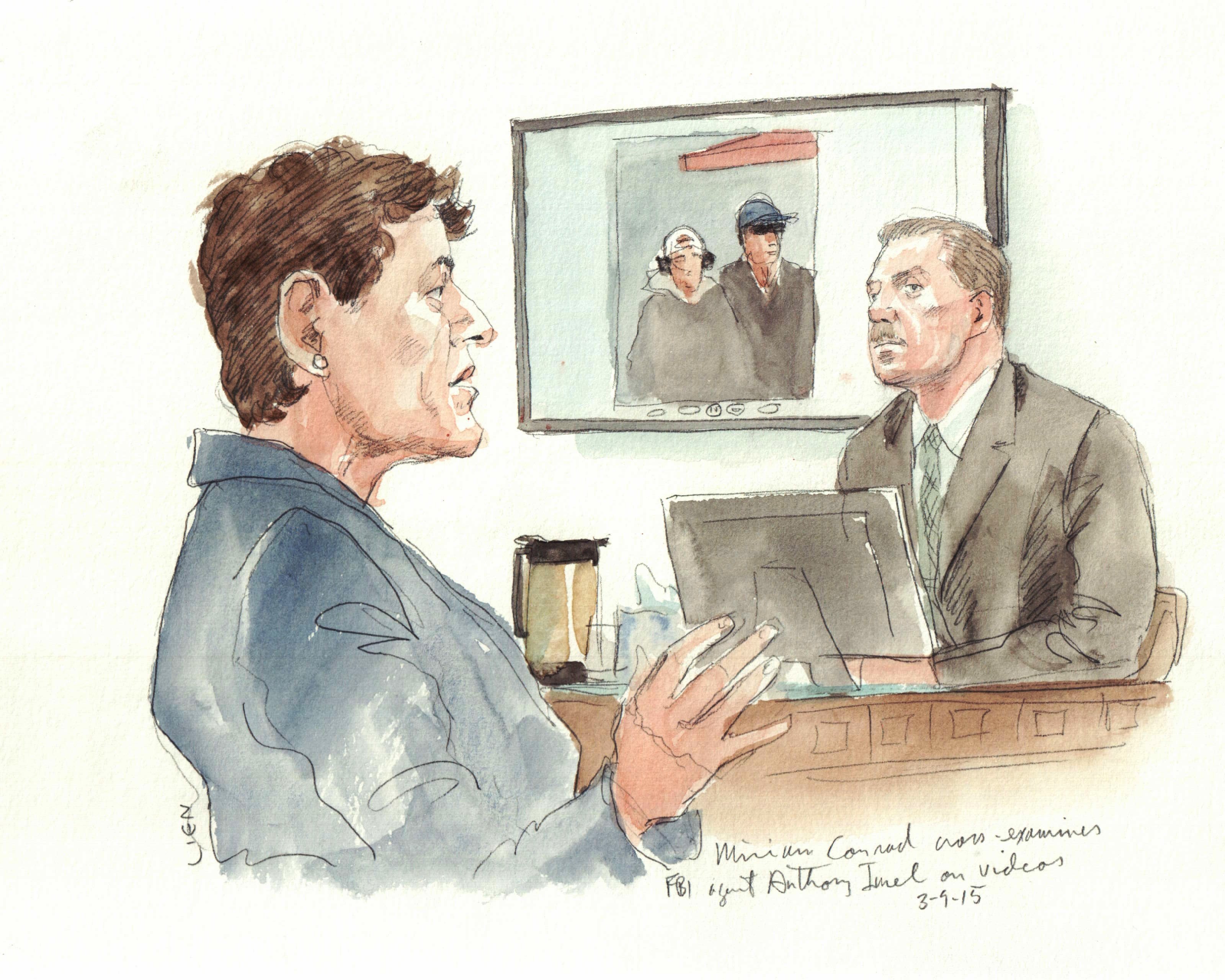 Two phases of the trial

Jurors first will be asked to determine, perhaps by as early as the end of this week, whether Tsarnaev is guilty of 30 counts. Because 17 of those counts carry the death penalty as a possible punishment, a second phase of the trial will follow if the jury convicts him.

The defense, which takes over this week, has argued that Tsarnaev, known to friends as Jahar, fell under the sway of his more extremist older brother after their parents moved back to Russia. Jahar Tsarnaev was flunking out of the University of Massachusetts and had lost his financial aid at the time of the bombings.

Prosecutors William Weinreb, Aloke Chakravarty, Nadine Pellegrini and Steve Mellin presented more than 90 witnesses who told the story of Tsarnaev’s alleged scheme with his brother, Tamerlan, to build and detonate pressure cooker bombs as an act of jihad. The Russian-born brothers, Muslims of Chechen descent, allegedly sought to kill Americans at an iconic public event to retaliate against U.S. policies they believed harmed and oppressed Muslims abroad.

They used data mined from a GPS device and store receipts to trace the purchase of the pressure cookers, BBs and ammunition. Jurors saw photos of pressure cooker parts, fuses, Christmas lights and other bombmaking materials found in the Tsarnaev family’s Cambridge apartment, where Tamerlan lived with his wife and child.

And they showed security surveillance videos of the brothers in the crowd near the finish line: In one, Dzhokhar Tsarnaev can be seen blending in with the crowd behind the Richard family for four minutes. He appears to slide a backpack off his shoulder near a tree and walk off, glancing over his shoulder. He broke into a run as the bomb went off.

After the surveillance photos were released to the public three days after the bombing, the brothers allegedly embarked on a desperate — and deadly — attempt to escape.

Jurors heard from carjacking victim Dun Meng and saw the brothers on convenience store surveillance video shortly before Meng’s escape. He can be seen jumping out of his leased Mercedes SUV at a gas pump and running across the screen as Dzhokhar Tsarnaev casually strolls through the store, picking up an armload of snacks.

Prosecutors also used ballistic evidence to link the brothers to the shooting of a campus cop at the Massachusetts Institute of Technology and a gunbattle with police in Watertown.

Tamerlan Tsarnaev, 26, died as a result of that gunbattle. The defendant, allegedly attempting to run down police, instead ran over his brother in the stolen Mercedes.

Jurors also viewed a boat in which Dzhokhar Tsarnaev sought refuge during the ensuing manhunt, which put Boston under a “shelter in place” lockdown.

He used a pencil to scrawl what prosecutors called his “manifesto” on the sides of the boat. It was pocked with bullet holes and streaked with blood.

He wrote he was jealous that his brother had achieved paradise by dying like a holy warrior in the gunbattle with police. He asked God to make him a martyr, too.

His justification for his actions echoed themes of the militant material on his laptop:

“The U.S. Government is killing our innocent civilians but most of you already know that,” he wrote. “Know you are fighting men who look into the barrel of your gun and see heaven, now how can you compete with that. We are promised victory and we will surely get it.”

He wrote that he couldn’t stand to see the U.S. government “go unpunished” for killing Muslims. “We Muslims are one body, you hurt one you hurt us all.”

He ended with: “Now I don’t like killing innocent people it is forbidden in Islam but due to said” — the word was lost to a bullet hole — “it is allowed.”

Tsarnaev has pleaded not guilty, although his attorneys do not dispute that he participated in the bombings. Lead defense attorney Judy Clarke asked jurors in her opening statement to keep their minds open to an alternative explanation.

The challenge for the defense will be to present a case that can somehow soften the harsh, unforgettable images jurors saw of ordinary people meeting a horrific end.