CHESTERFIELD COUNTY, Va. -- The condition of the grounds at Dale Memorial Park off Newbys Bridge Road in Chesterfield shocked Carol Wheeler and her family when they recently visited her grandmother's grave site.

"It looked like the place had been vandalized," Wheeler said. She noted tire marks, holes and urns that appeared to have been torn off headstones and thrown aside.

"We were trying to pick up peoples' urns and put them back on their headstones," Wheeler said.

Wheeler, who said this was the first issue she has had with the cemetery in three decades, was not alone in her outrage. Photos posted on social media quickly spread as people offered their opinions on the cemetery's condition.

Becky Spain, from Colonial Heights, saw the photos on Facebook and decided she had to drive out to Dale Memorial to inspect the condition of her father's grave.

"I was not able to tell, from the pictures, what it was like near where my dad is buried," she said. "There are tire tracks everywhere. There are huge holes in the ground. If an elderly person stepped in one, they'd break their leg." 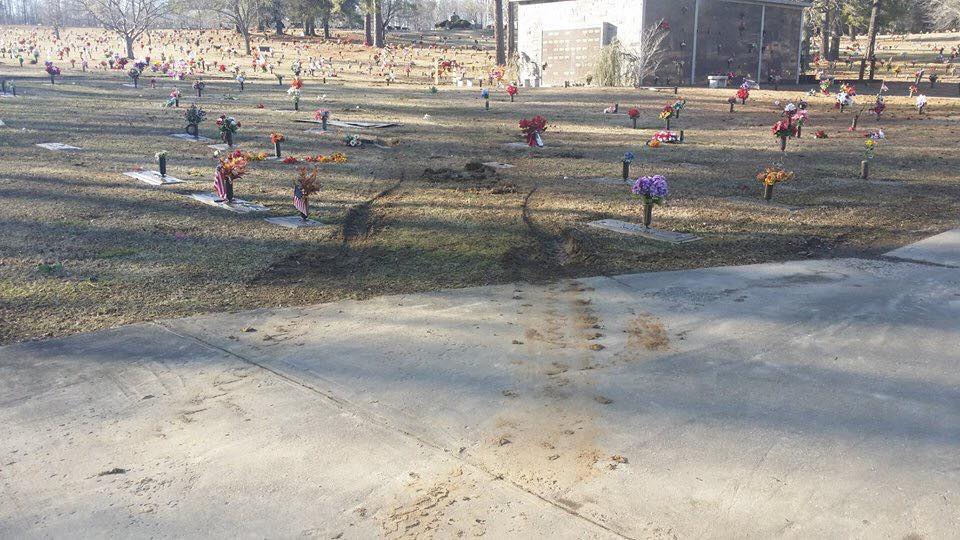 When asked about the condition of the grounds at Dale Memorial Park, the cemetery's general manager referred all questions to its parents company.

"We are committed to providing all families with a well-maintained environment for visitation and remembrance at Dale Memorial Park. The winter weather has been especially harsh and as a result the grounds have suffered from the elements," Kim Tarleton, with Service Corporation International, said in a statement. "We empathize with our client families and understand their concerns about the cemetery grounds. Occasionally due to circumstances beyond our control, our property requires additional maintenance which we conduct as professionally and as quickly as possible."

The statement indicated a crew was scheduled to come to Dale Memorial next week and perform grounds cleanup, lay topsoil, straw and seed.

"I am glad they're addressing this problem," Wheeler said. "I understand about the snow, but for the urns to be pulled from the stones, I felt like they should have taken more care and concern."

Spain was less convinced with the cemetery's response.

"Tires marks clearly went over two graves. They drove across these graves. That's negligence. It's disrespectful to the deceased and the families who paid for these grave sites," she said.

Dale Memorial encouraged concerned families to contact them directly at 804-748-5843.