HENRICO COUNTY, Va. – Henrico County School officials are aware that the roof of Hermitage High School needs to be fixed, but parents have immediate concerns over the conditions inside the school. The recent snowfall has taxed the structure, and currently sheets of plastic hang from parts of the ceiling throughout the school, and run off into trash cans which collect the dripping water.  As Henrico County Spokesman Andy Jenks explained, some problems that previously occurred with torrential rainfall had already been fixed, but the recent snow created what he called “ice dams.”

“So the ice dams on the roof started to reroute water in ways that it wasn't naturally designed to do, and it was that water that has found a way inside the school building," Jenks said. 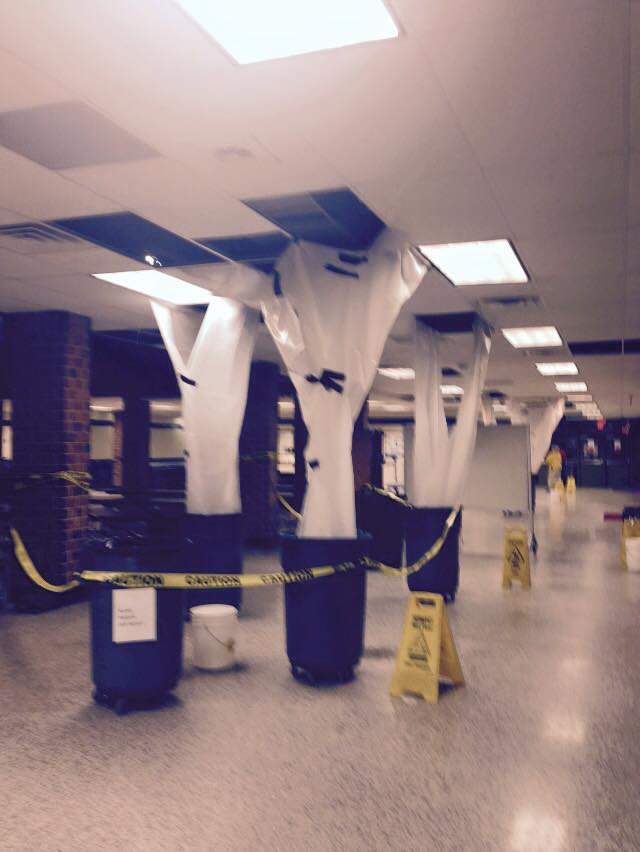 Several parents have expressed frustration, not just over the current conditions, but they also worry money won’t be allocated to fix the problem. School officials have tried to assuage such concerns, and confirmed that while “it's been an issue for several years,” a current assessment of the roof has been underway and a plan will be presented within a month or two before the Henrico School Board.

One parent reached out to both alumni and school officials on Monday, via Facebook, after Hermitage hosted the Conference 11 Championship Basketball Games for area schools.

Carol Jackson, President of the Hermitage Athletic Boosters and parent of two students at Hermitage, said that it was “embarrassing and unnecessary on so many levels,” to present the school that way to guests, on top of the daily environment students experience.

Jackson said she is concerned that Hermitage will not get enough appropriation from the county budget to fix the roof in its entirety and questioned if newer West End schools like Glen Allen High or Deep Run have such problems.

“The county manager and Supervisor Glover both told me that the county made the schools include $2.5 million a year in their budget since 1998 or 1999 to deal with roof issues,” she said. “Doing the math, that is over $30 million that HCPS could have had use of to take care of this issue.”

“So my question is why did Hermitage not get its share to fix their roof?” Jackson asked.

That budget helps cover 72 facilities within the district and has been used “when issues come up,” explained Henrico School Board member Beverly Cocke, who represents the Brookland District.

“You can’t use your whole budget on one roof,” she said and pointed out examples of disasters that have struck at other schools over the years.

The roof itself is its own beast and presents complex challenges, having been a 1970s design which put internal gutters under a flat roof.  In the late 1980s, work was done to fix problems that had already arisen, and a metal roof was put in on top of the sprawling school, basically one over the other, Cocke explained; “we have two roofs.”

“We are the only school to have this particular problem,” Cocke said and pointed out that “it’s not an average roof.”

The sprawling school has a metal roof put on in stages in the lates 80s, into the 90s.

She said that since taking her position three years ago, and as an alumna, she has focused on the issue, with two years being spent to try and figure out the leaks.

A roofing assessment is expected by the end of March and will yield some idea as to the total cost. That assessment should go before the school board in April, said Cocke.

“...What we can say with some reasonable certainty is that we will bring something forward with the school board within the next month or two and from there the school board, like it does with a lot of different issues,  will begin to allocate funds and prioritize projects, work with the staff and the community to make that happen," Jenks said.

As of right now, there is no definite allocation, no planned construction on paper that would fortify the school roof against any winter storms this year or next school year.

“And it's not an acceptable environment and it's something we will need to fix as fast as we can,” Jenks said.

“There is no excuse for a Henrico County school to have that situation existing inside a building,” Jackson said.

The students can look forward to upgraded bathrooms in the 2015-2016 school year. Cocke secured meals tax money to put into the school bathrooms, some of which she said had never been upgraded since the school opened in 1973. That construction takes place over the summer.

The public will be able to find the documents regarding the roof, here, when they are available.