This video was released by the NTSB, on Jan. 13, 2015. It shows the tragic event that occurred the night of May 09, 2015, the evening of the first launch at the hot-air balloon festival. Graphic warning!

WASHINGTON – The National Transportation Safety Board has released a new report on the hot-air balloon crash last May that killed a pilot and two University of Richmond staffers at the inaugural Mid-Atlantic Balloon Festival.

The NTSB's factual report reveals that Daniel Kirk, the balloon's pilot, died of blunt force trauma. According to the toxicology report, there was no alcohol in Kirk's system. The pilot was taking Allegra, an antihistamine, along with a medication for blood pressure. However, there is no indication that those medications contributed to the cause of the crash.

A video obtained from a witness indicated that as the pilot approached the intended landing area on May 9, 2014, he engaged the burner for about 15 seconds prior to impacting the powerlines. Subsequently, the balloon basket and a section of the envelope caught fire. The balloon then began an accelerated climb and drifted out of the top view of the video recording.”

University of Richmond coaching staff members Ginny Doyle and Natalie Lewis were also killed when the balloon  burst into flames and the basket broke away.  Doyle served as associate coach on the women’s basketball team. Lewis was Director of Basketball Operations for the program.

The final report should be released in February or March. 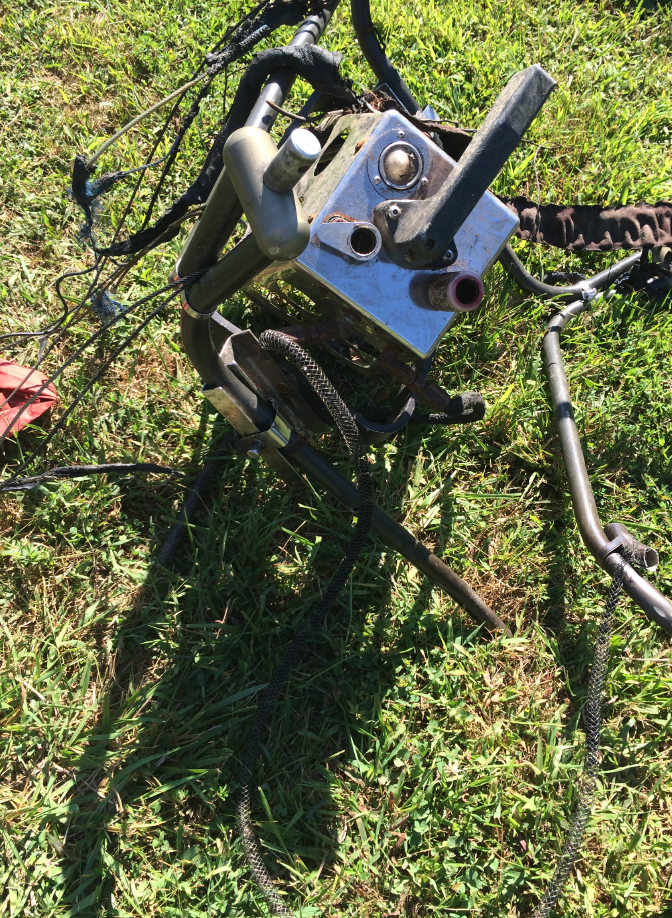 Here's the complete report from the NTSB:

On May 9, 2014, about 1940 eastern daylight time, an Eagle C-7 Balloon, N3016Z, was destroyed by fire after a landing attempt to a field and subsequent impact with powerlines near Ruther Glen, Virginia. The commercial pilot and two passengers were fatally injured. Visual meteorological conditions prevailed, and no flight plan was filed for the local sightseeing flight that departed from Meadow Event Park, Doswell, Virginia, approximately 4 miles to the south of the accident location. The local sightseeing flight was conducted under the provisions of Title 14 Code of Federal Regulations Part 91.

Multiple eyewitnesses reported that the accident balloon approached the intended landing area from the south where another balloon had just landed. As the accident balloon approached the landing site, the pilot engaged the burner; however, the balloon struck powerlines, which resulted in a spark. A video obtained from a witness indicated that as the pilot approached the intended landing area, he engaged the burner for about 15 seconds prior to impacting the powerlines. Subsequently, the balloon basket and a section of the envelope caught fire. The balloon then began an accelerated climb and drifted out of the top view of the video recording.

The pilot, age 65, held a commercial pilot certificate, with a rating for lighter-than-air free balloon, which included a limitation for hot air balloon with airborne heater. He did not hold, nor was he required to maintain, a Federal Aviation Administration (FAA) medical certificate. According to a souvenir card, being handed out at the balloon festival, the pilot had 31 years of experience and over 660 hours of flight time.

According to FAA and balloon maintenance records, it was equipped with two aluminum propane tanks, a wicker basket, and a 78,133 cubic foot envelope. In addition, it contained a small pod of instruments that consisted of a vertical speed indicator, altimeter, and envelope temperature gauge. The most recent annual inspection, on the balloon, was performed on August 5, 2013, and at that time it had accumulated 270.4 hours of total time in service.

This is raw video, with some profanity, and disturbing images and sounds. Please consider before viewing.

An FAA inspector that was at the launch site prior to the flight departing stated that a mandatory safety briefing by the event organizer reviewed the weather conditions with the pilot participants of the balloon festival including the accident pilot. In addition, he stated that "wind conditions were measured on site several times prior to launch to establish a trend. I recall winds were slowly decreasing, from initially about 12 knots to some as low as 6 knots at the surface. The winds aloft indicated that winds by 1000 feet were increasing in velocity and shifting the course to the right."

the remains of the wreckage were brought to shore.

The debris path was approximately 5 miles in length and was oriented on a northeast heading from the attempted landing field. The balloon impacted electrical powerlines that were about 30 feet agl near the attempted landing field. Several pieces of charred material were present in the vicinity of the powerline. Two aluminum propane fuel tanks, a hand-held fire extinguisher, the instrument pod, and various pieces of the charred envelope fabric, that were associated with the lower portion of the balloon envelope, were recovered along the debris path. Both propane fuel tanks were intact but exhibited thermal and impact damage and were devoid of fuel.

The balloon crown, crown ring, deflation port, and the burner were recovered on May 27, 2014, approximately 9 miles northeast of the takeoff location and about 5.9 miles north of the powerline strike location. An examination of the recovered components was performed on August 25, 2014, at a salvage facility located in Clayton, Delaware.

Further examination of the two recovered propane cylinder tanks revealed that the main valve on the center aluminum cylinder was damaged by fire and its position was not able to be determined. In addition, the fuel quantity gauge on each tank exhibited thermal damage and could not be read.

The Office of the Chief Medical Examiner, Richmond, Virginia, conducted an autopsy on the pilot on May 12, 2014. The autopsy listed "blunt force trauma" as the cause of death.

Forensic toxicology was performed on specimens from the pilot by the FAA Bioaeronautical Sciences Research Laboratory, Oklahoma City, Oklahoma. The toxicology report stated no ethanol was detected. However, both Fexofenidine and Valsartan were detected in the blood and liver.

According to the FAA Aerospace Medical Research, Forensic Toxicology Drug website, Fexofenadine, marketed under the trade name Allegra, was known as a nonsedating antihistamine used in the treatment of hay fever symptoms and the common cold.

According to the FAA Aerospace Medical Research, Forensic Toxicology Drug website, Valsartan, marketed under the trade name Diovan, was an angiotensin II receptor antagonist, commonly referred to as an Angiotensin Receptor Blocker or "ARB." It was typically used for the treatment of high blood pressure, congestive heart failure, and post-myocardial infarction.

A Garmin 12 handheld global positioning system (GPS) was sent to the National Transportation Safety Board (NTSB) recorders laboratory for download in Washington, DC. The Garmin 12 handheld GPS system did not contain any pertinent information to the accident investigation.

A Garmin Rhino 530HCX handheld GPS was recovered and sent to the NTSB recorders laboratory for download in Washington, DC. The Garmin 530HCS GPS did not contain any pertinent information to the accident investigation.

According to the power company, after the accident, they dispatched a team of employees to examine the powerlines. Upon examination, they noted that there was no structural damage to the lines. One phase line had a burn mark on the side that was closest to the intended landing zone. According to the power company, the powerlines were three-phase lines that were 7,200 volts phase to ground.

In the "Normal Flight Operations" section of the balloon flight manual, there was a note that stated, "Extreme care and judgment should be used in selection of landing sites in avoiding downwind powerlines."

In Chapter 3, "Preflight Planning," it stated "Almost all balloon flying is done in relatively benign weather conditions and mild winds. Most pilots prefer to launch and fly in winds less than 7 knots. While balloon flying is performed in higher winds, pilots accept that the faster the winds, the more they are exposed to risk and injury."

In Chapter 7, "Inflight Maneuvers," stated in part "One technique to determine if the balloon is ascending, flying level, or descending is to sight potential obstacles in the flight path of the balloon as the balloon approaches the wires, the pilot should determine how the wires (or other obstacles) are moving in his or her field of vision relative to the background. If they are moving up in the pilot's field of vision, or staying in stationary, then the balloon is on a descent that may place the pilot and passengers at risk. Conversely, if the wires are moving down in the pilot's field of vision, then the balloon is either in level flight or ascending, and able to clear the obstacle. Vigilance is required for constant scanning of the terrain along the flight path, and the pilot must be alert to avoid becoming fixated on sighting objects." In addition, it stated that "the balloon actually responds to a burn 6 to 15 seconds after the burner is used."

In Chapter 8, "Landing and Recovery," it stated, "Having the skill to predict the balloon's track during the landing approach, touching down on the intended landing target, and stopping the balloon basket in the preferred place can be very satisfying. It requires a sharp eye trained to spot the indicators of wind direction on the ground. Dropping bits of tissue, observing other balloons, smoke, steam, dust, and tree movement are all ways to predict the balloon track on its way to the landing site. During the approach, one of the pilot's most important observations is watching for power lines."

In addition, Chapter 8 reviews, "To summarize, if there is an obstacle between the balloon and the landing site, the following are the three safe choices.
1. Give the obstacle appropriate clearance and drop in from altitude.
2. Reject the landing and look for another landing site.
3. Fly a low approach to the obstacle, fly over the obstacle allowing plenty of room, and then make the landing."

Lastly, Chapter 8 addressed a "high-wind landing," which stated "When faced with a high wind landing, the balloon pilot must remember that the distance covered during the balloon's reaction time is markedly increased. This situation is somewhat analogous to the driver's training maxim of "do not overdrive your headlights." For example, a balloon traveling at 5 mph covers a distance of approximately 73 feet in the 10 seconds it takes for the balloon to respond to a burner input—a distance equal to a semi-truck and trailer on the road. However, at a speed of 15 mph, the balloon covers a distance of 220 feet, or a little more than two-thirds of a football field. A pilot who is not situationally aware and fails to recognize hazards and obstacles at an increased distance may be placed in a dangerous situation with rapidly dwindling options."